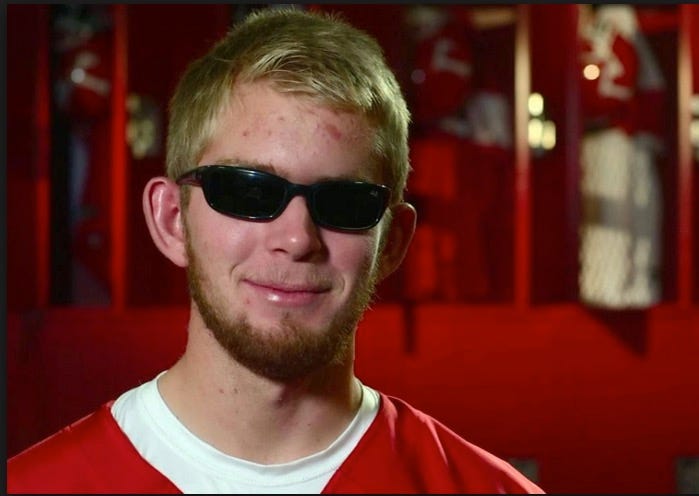 This was a story from April:

Jake Olson has a hurdle to clear before walking on to the USC football team.

The blind snapper and Trojans super fan from Orange Lutheran High has been accepted to USC and plans to join the squad, as first reported by the Los Angeles Times. However, Olson will have to navigate some NCAA red tape before making his latest dream a reality.

Olson, who lost his eyesight as a youth because of a rare form of cancer, is a recipient of a Swim With Mike scholarship, given to athletes with physical challenges. Because that’s considered an athletic scholarship, if Olson walked on to the football team, he would become a “counter” in football – i.e., he would occupy one of the available 85 roster slots.

The way the NCAA determines counters, football supersedes all other sports. According to bylaw 15.5.9.1, even a student-athlete “who was not recruited and/or offered financial aid to participate in football and who competes in football and one or more (other) sports shall be counted in football.”

Although Olson isn’t planning to participate in another sport, he falls under that category as a Swim With Mike scholarship recipient.

The NCAA had no comment on the situation. [OC Register]

And, quick update, as I found out yesterday – the NCAA still has not cleared him to play. At the end of August. As teams are practicing and gearing up for the season in a little over a week.

Jake Olson has battled cancer all his life. As an infant it took one of his eyes. It came back when he was 10. Before he went blind his wish was to see USC play one last time. USC and Make-A-Wish made this happen. He was given a ride on the team plane, gear… all the kind of stuff that makes Make-A-Wish events happen special.

Now he’s old enough to play and wants to walk on to the USC football team as a longsnapper. NCAA has spent months deliberating, trying to determine if the Make-A-Wish event counts as an impermissible benefit. [r/CFB]

Classic slippery slope situation. If you let one Make A Wish kid play D1 football a decade after he visited the USC football team, what’s to stop the next generation of kids from giving themselves cancer to do the same thing? You know how intense the recruiting game is and how ruthless the competition is for a roster spot. If it’s ok for Jake Olson to fight his entire life to overcome a deadly disease and lose both his eyes to an aggressive cancer then be allowed to join a team as a feel good story, how do you prevent dozens of other kids from doing the same thing just to get a leg up on their non-cancer having competition? A kid who is maybe not as strong, not as fast, not as talented as his peers, thinking he can just cheat the entire system by getting cancer and undergoing years of pain and agony and grueling chemo and blindness to put on a Trojan uniform someday as a longsnapper.

Seriously, a lot of people give the NCAA shit, but they don’t think the whole thing through. Always two sides to a story, people forget that.

*What I mean by that is please change, in almost every single conceivable way, from top to bottom, just gut the entire thing and fire everybody and start over with people who have common sense and integrity and can think rationally. We’re begging you.