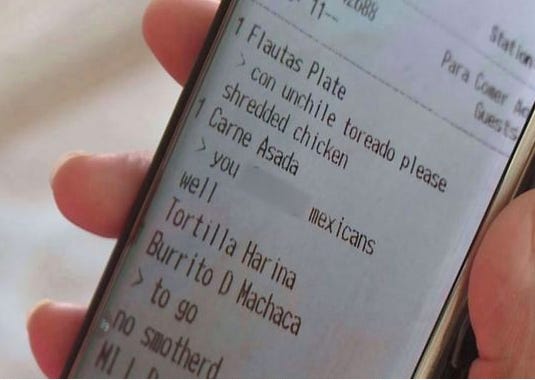 DENVER – A Mexican restaurant is defending its image after a customer received a racially offensive message on her receipt. “I grabbed the check and I’m looking at it, and that’s the first thing that caught my eye, and I was like ‘whoa!'” Beatriz Castorena said. Castorena and her husband dined at El Valle Mexican Restaurant Friday night on West 38th Avenue. As she looked over her receipt, she noticed below her order of carne asada, were the words, “you f****** Mexicans.” The couple flagged down their waitress to show her what was written on their receipt. “She grabbed it and she seen it and she was like, ‘oh how funny,'” Castorena recalled. “I was like, ‘that’s not funny. That’s not funny at all.” The couple paid their bill and left the restaurant. Castorena’s family later posted a picture of the receipt to Facebook. It was shared several times on the Facebook page of El Valle Mexican Restaurant. On Saturday, Castorena said she returned to the restaurant for an explanation and an apology.  “I was a little bit offended as well,” said El Valle manager and co-owner Oscar Rivera. Rivera told 9NEWS the offensive note should never have made it to the customer’s table. Rivera said a waitress wrote the message, intending it to be a joke for the cooks. “In the restaurant, you know, cooks and waiters always give each other smack and talk stuff,” Rivera said. Rivera said another waitress grabbed the receipt from the kitchen and brought it to Castorena’s table after they asked for the check. “All our clients are Mexican,” Rivera said. “We’re Mexican, so it’s absurd that they believe people actually feel that way, but I understand why.”

Whoa whoa whoa. Saying “you fucking Mexicans” isnt racist if its done at a Mexican restaurant by Mexican people. Thats like black people saying the N word. You get amnesty in that situation. Some fucking Mexican rolling burritos is allowed to say “You fucking Mexicans.” Because he’s fucking Mexican. You follow? I mean these are the basic rules of racism. Now, last week we saw the Receipt Racism with the chick at the pizza place that got the bill that said “Fried hard like black dick.” But that was a black chick at a pizza place owned by some white trash in Philly. This is Mexican on Mexican Receipt Jokes. That cancels out and there’s no harm.

Plus in case you Mexicans didnt realize you’re all under attack right now. If the Donald Trumps of the world get this way you wont even be in Denver calling each other “fucking Mexicans.” You’ll be stuck back in Mexico calling each other names. So why dont you cut it out with the receipt nonsense and join forces. Laugh it off, high five each other, and saying “Fucking Mexicans!” with some pride rather than this intra-Mexican racism.