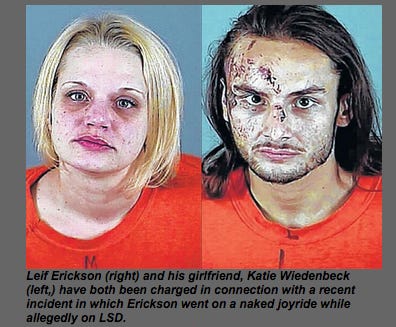 Source - Capt. Ron Oremus said it’s essentially a miracle no one was seriously injured or even died after a man, high on LSD, led police on a high-speed chase across the city. “It’s pretty amazing,” Oremus said. Oremus uses these words to characterize the events last week given the fact that Leif Erickson plowed through a fence, slammed into two Waukesha police cars, drove erratically and at high speeds through Waukesha streets and later crashed his truck. Erickson, 21, who was nude at the time, has been charged with three counts of being a repeat offender of first-degree recklessly endangering safety, attempting to flee or elude a traffic officer, hit and run (causing injury), obstructing an officer, and disorderly conduct/domestic abuse for his actions on Tuesday, Aug. 11. A high-speed chase, which police captured on video, ensued. Erickson reached a speed of approximately 70 mph as he drove over the curb and onto Progress Avenue, ignoring stop signs along the way as he reached Sentry Drive. Erickson then turned west onto Sunset Drive before striking the curb multiple times, almost losing control of his vehicle. Also during the chase, Erickson’s vehicle spun 180 degrees after he slammed on the brakes. After being taken to the hospital, Erickson admitted to officers he took “two hits of acid” four hours earlier. Oremus said given Erickson’s “bizarre behavior,” officers responded to Erickson’s residence at an apartment at 338 Jackson Court, where he shares a residence with his girlfriend, Katie Wiedenbeck, 31, who has also been charged in this case. Wiedenbeck told officers Erickson took two tabs of LSD before leaving the apartment. She said she attempted to prevent Erickson from leaving the apartment when he punched her in the face. According to a criminal complaint, officers found numerous items of drug paraphernalia and controlled substances in Wiedenbeck’s bedroom. Officers found her behavior to also be bizarre. She had hard time standing up and appeared disoriented. A .38 caliber revolver was also found on the table. A heroin cooker with two capped syringes, a marijuana pipe and LSD were found on the dresser.

A couple of things going on here. 1) This guy’s name is actually Leif Erickson. Don’t you get a free pass in life when you have the same name as a Viking? That’s so awesome, shout out to Leif’s parents for doing the right thing. It’s lame when people name their kid Michael Jordan and shit like that, but if you have the chance to name your kid the same name as a bad ass Viking, you have to do it. And 2) goes without saying, but dropping acid and driving around tripping out sounds like a lot of fun. It’s Rainbow Road come to life. Us dumb dopey white people with jobs and IRAs will never know that feeling. Kinda sucks when you think about it. There’s this whole other world of dropping acid and shooting heroin and driving around naked that we will never know. I actually think the government needs to set up some sort of program where if you want to go to some field in the middle of nowhere and experiment with drugs, you’re more than welcome. You just sign a waiver and purchase your drugs at the snack bar, kind of like when your parents would leave you at the public pool by yourself. That way anyone can experience drugs and running around naked, the government makes a little side cash, and the Leif Erickson’s of the world have a special place to live and take all the acid hits they want without nearly killing everyone on the road.