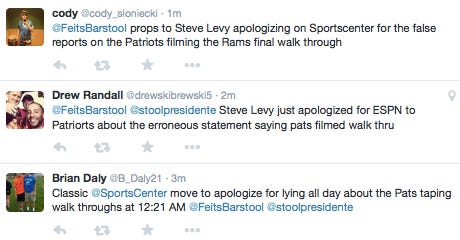 ESPN has reported so many god damn lies about the Pats I don’t even know which ones they are even apologizing for?  Was it Bill Polian constantly saying the Pats were caught taping the Rams practice even though that never happened?  Was it the Chris Mortensen’s totally erroneous report about PSI’s?  Was it Kelly Naqi’s false report about the Pats trying to sneak unapproved kicking balls into the game?  Tell me ESPN.  What lies exactly are you apologizing for?  And more importantly apologizing in the dead of night when everybody is asleep doesn’t count.  That’s what cowards do.   That’s what spineless hacks do.  That’s what yellowbelly journalists do.  I want Polian to apologize and kiss the rings.  I want Mortensen to apologize and kiss the rings.  I want Mark Brunell to cry and kiss the rings.  So I think I speak for all of Patriot Nation when I say apology NOT accepted.   Hey ESPN go fuck yourself.

PS – I truly believe Barstool is the only place that mentioned these false reports. Can’t recall seeing them anywhere else. You’re welcome for the apology while you all slept, world.  #DEFENDTHEWALL