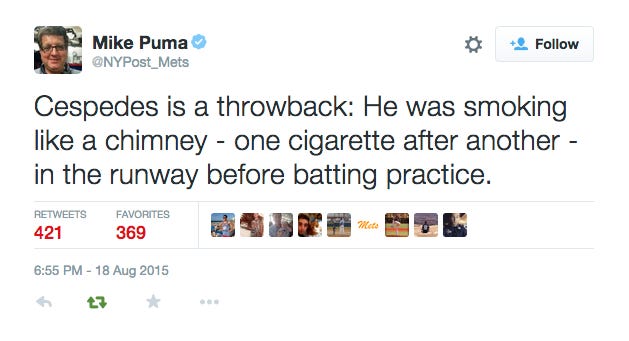 Goddamit do I love this ball player. Just a big bat, with a big arm, and an I dont give a fuck attitude. Ripping cigs in between the clubhouse and the dugout. Rumor has it he’ll smoke em in the bathroom during the game. He would make Keith Hernandez proud: 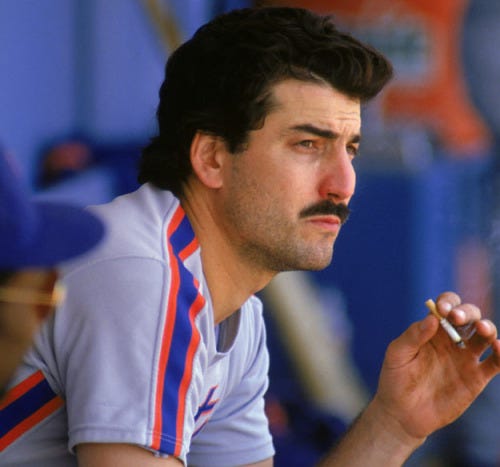 Throwing it back to when baseball players were men doing men things. People love to drop that he’s been on 4 teams in 4 years meaning he’s some sort of cancer. The reports from Boston were that all the Red Sox “hated” him, but that cant be trusted because Boston always slanders players on their way out the door. I think Cespedes is a good player who does a lot of things well but not one thing great, which makes him an attractive piece to acquire and an easy piece to move. And clearly he’s got a little bit of an attitude and an edge, but sometimes you need that on a ball club. I’ll take a fuckin a nasty Cuban who doesnt play by the rules on my team any day. Sucks that he’s a rental and that the Wilpons will never pony up the money to retain him, but I, for one, would gladly take a cigarette ripping Cuban defector with a HOSE and a big swing. He’s infinitely more talented than the other players on this team and he’s got the swagger to back it all up. Why anybody wouldnt want this guy is beyond me