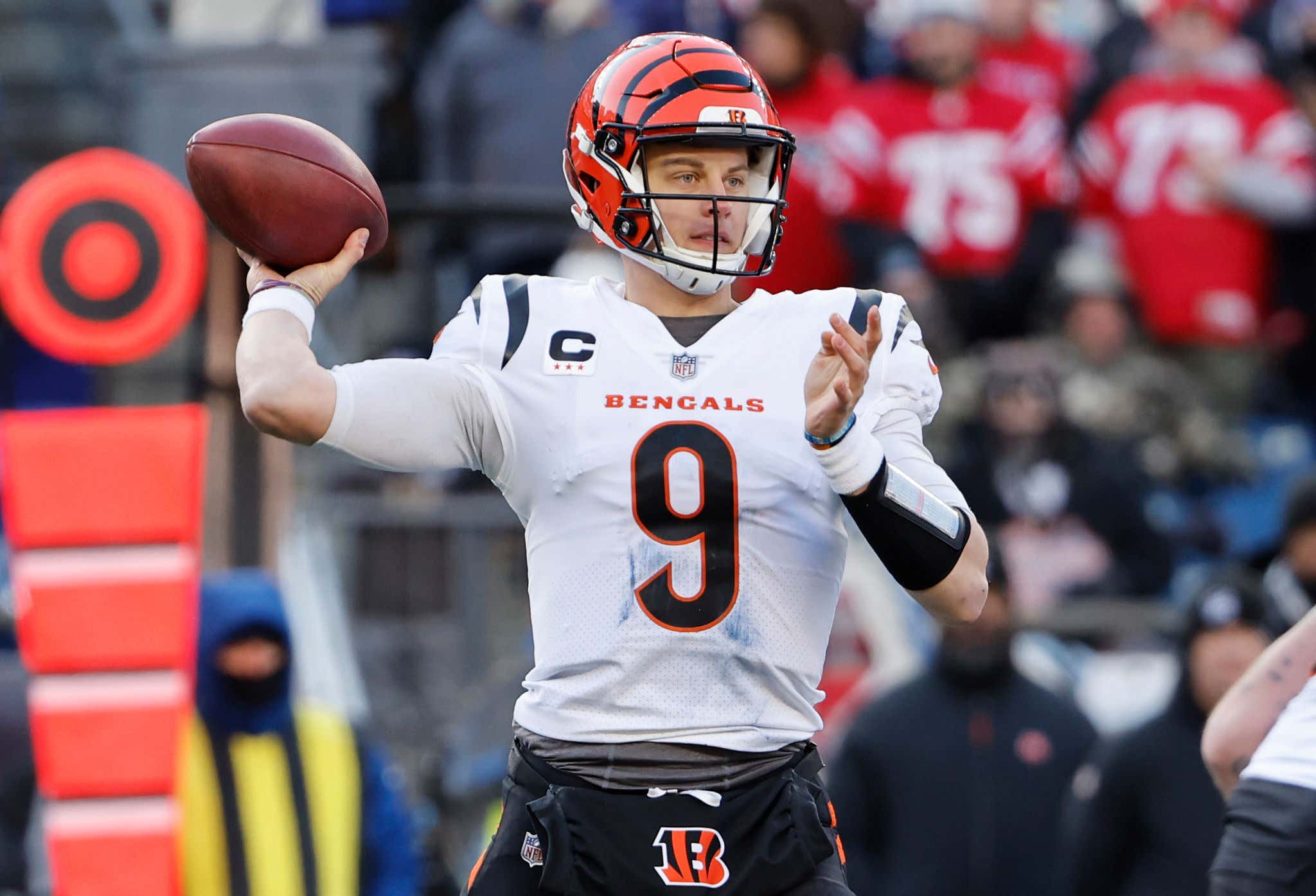 OK, Week 17 NFL power rankings…we're almost to the playoffs!! Some would-be contenders are sustaining heavy losses amid the gridiron's perpetual war of attrition. On the other hand, the team who leads this blog's headline is healing up and possibly peaking at the perfect time.

In case you tuned out of Monday Night Football, please enjoy this frozen rope from Justin Herbert to springboard you into the rest of the article:

The Race To The Bottom Tier

Because the Texans almost beat the Cowboys and Chiefs, followed by a win over the Titans, I have to give them the nod over Chicago. They should absolutely cease trying the final two games, though. They're in danger of handing the Bears the No. 1 overall pick. On the other hand, that only really matters if Houston doesn't select a quarterback atop the draft.

Let's just rattle through this hot mess gaggle of teams really quickly, shall we? Indy: Still gonna employ Chris Ballard as GM. Luck with that. Still too soon for that pain-inducing pun?

Skipping over the Broncos so I can more organically plug my recent blog below it. Moving on to Arizona: Good for them forcing the shitty Bucs to overtime. Kliff Kingsbury did a fine job getting third-string QB Trace McSorley up for that one. Who knew he could almost "outduel" Tom Brady? Well done, Kliff. Maybe you're not fired after all.

Thank goodness we don't have to see smug-ass Arthur Smith and the Falcons claim the NFC South. They're a quarterback and then some away. I will credit Smith for at least getting more out of this roster than most men could.

Cleveland: Scumbags. The Raiders: Another week, another blown lead. And I think Derek Carr really is broken this time.

Ooooooh the Denver Broncos to cap this thing off. They flat-out quit on Nathaniel Hackett. He was fired the next day. Russell Wilson is looking like the worst trade ever. BUT…the Broncos aren't as fucked as you think. Please read below.

The Way Too Little, Way Too Late Tier

BAKER MAYFIELD FROM THE TOP ROPE! We all know the Baker Cycle by now, right? Play shitty…call out haters in the media…play reasonably well…get expectations up…play shitty again. Like clockwork.

I'm just kidding for the most part. I believe Baker has found a great match in Sean McVay, whose system is similar to the Kevin Stefanski offense Baker orchestrated during the Browns' last playoff run. The Rams are likely to start Matthew Stafford under center in 2023. They also return an exceptional defense. If I were Baker, I'd be QB2 behind Stafford and bide my time. No starting opportunity around the league will be a good or sustainable one.

Mike Vrabel's extraordinary coaching efforts aside, Tennessee is just devastated by injuries. Every year I feel like I have questions about the Titans' collective talent level. Now their lack of depth is being exposed. Ryan Tannehill is out. Fans in Nashville should be grateful Vrabel steered the ship well enough to play for the AFC South crown in Week 18.

Then there's New Orleans. Woof, man. No. Just no. Even with the lovable Andy Dalton leading the way. No thank you. Give me TB12 or the upstart Panthers. Speaking of Carolina…Full disclosure: Maybe I have more than a passing interest in them…

THIS is the Panthers team I thought I'd be getting all year!!!! I just didn't think it'd be Sam Freaking Darnold leading their late-season charge for the division title. Credit Darnold for persevering through a preseason injury, dealing with life as a third-stringer, dealing with Ben McAdoo as his play-caller and then coming on strong as a 3-1 starting QB with zero interceptions.

Someone explain to me how this is possible (you can't):

On Pittsburgh: Mike Tomlin. Sheesh, my guy. You just won't go down, will you? My go-to talking point about the Steelers is how Tomlin hasn't had a losing season. Seemed like that streak was destined to end. Nope. Here we are in late December and Tomlin can go 9-8 by winning the last two. Un-fucking-believable.

The Lions and Seahawks have great offenses but uhh can't stop a nosebleed. That's kind of important this time of year. Quite the opposite is the case for the New York Jets, who are at least getting a somewhat-healed Mike White back to lead their passing "attack".

Pretty sure most of us NFL-following folk left the Packers for dead a while ago. "WIN OUT AND MAKE THE PLAYOFFS, YEAH RIGHT!" Three consecutive victories later, and Aaron Rodgers has Green Bay legitimately gunning for a Wild Card spot.

Is there a more deplorable, insufferable QB-OC pairing than Mac Jones and Matt Patricia? Kyler Murray and Kliff Kingsbury technically count even though Kliff is the head coach I guess. Otherwise, I don't think anyone comes close. The Patriots play like a high school offense, so I get Mac's frustration. Mac is also a little dirty-playing prick.

Part of me will never stop being intrigued by whatever Tom Brady is doing. At this point, I'm over this current iteration of the Buccaneers. They BLOW. Oh well. Assuming Brady can best Sam Darnold this Sunday, looks like Tampa will win the division again and get curb-stomped by the Cowboys in the first round.

Both these NFC East teams are in the playoffs right now, yet I can't stop thinking what the possibilities might be if Lamar Jackson winds up with one of them in 2023. Although Daniel Jones has been fine for the G-Men, just imagine for a second Lamar and Saquon Barkley putting defenses in conflict at the mesh point on read-option plays. TERRIFYING. New York also has the Ravens' old defensive coordinator in Wink Martindale, so he has a great feel for who Lamar is. That can only help.

As for Washington, the skill position talent is off the charts. Dunking Lamar in that offense with that supporting cast is a tantalizing proposition and could mark a revolutionary, watershed moment in the franchise's history. Talk about expelling the stench of Dan Snyder's ownership tenure.

Seriously, if the Ravens slap the non-exclusive franchise tag on Lamar, two first-round picks is well worth the price. The Giants and Commanders making the playoffs this year means they're way ahead of schedule in terms of rebuilding. Someone like Lamar would lift either of them from hanging-by-a-thread postseason team to that esteemed Super Bowl-caliber stratosphere.

The House Is On Fire Tier

Four straight losses. Concussion protocol again for Tua Tagovailoa. I love me some Mike McDaniel, but damn are the wheels falling off in Miami. I just hope the Dolphins do the right thing here regarding Tua's well-being. Miami has to hope Teddy Bridgewater can get them to the dance and maybe win once. Otherwise, safe to say the Fins aren't making a deep run given Tua's health.

The One Year Away Tier

Given how well Trevor Lawrence is playing, there's no question the jags can win a home playoff game after wresting the AFC South away from Tennessee in Week 18. There's a fair chance they'll face the embattled Ravens, who they knocked off in dramatic fashion to spark their ascent to postseason contention. Otherwise, it might be a matchup with the Chargers. Justin Herbert against Trevor Lawrence on Wild Card Weekend? Please sign me up.

The reasons I have the Ravens here are my default respect for their organization, how excellent their defense is and the assumption that Lamar Jackson should be available for the playoffs. They're built to win when the temperature drops with an elite rushing attack and stout D. I just wonder if the Lamar contract debacle is too much for them to collectively overcome.

Don't look now, but here come the Chargers. I swear I'm not jinxing them. Unlike weirdos who feel compelled to prove JUSTIN HERBERT >>>>> JOE BURROW or vice versa, I choose to appreciate Justin Herbert for who he is. The Bolts are getting healthier at the perfect time. My question is: Will head coach Brandon Staley and offensive coordinator Joe Lombardi hold Herbert back? With apologies to KenJac, I'm leaning "YES" on that.

We all know what the situation is with the Vikings. All they do is keep winning close games. For that reason, they're just on the edge of teams who I believe without much doubt can win the Super Bowl.

That Eagles-Cowboys game was a thriller and a big statement for Dak Prescott IMO. He was sacked six times, got less than three yards per carry on 25 totes from Dallas' tailbacks and still hung 40 points on Philly's vaunted defense. You can't deny how impressive that is. Would love to see those teams square off one more time, hopefully with Eagles MVP contender Jalen Hurts healthy.

I'll probably bump the Bills up to second in the power rankings if they go into Cincinnati and knock off the Bengals on Monday night. I'm just not convinced that's going to happen. Joe Burrow and Co. haven't played a complete, 60-minute game all season, started 0-2 and are still 11-4.

If you look at the Bills' schedule, it's been pretty easy. Can't wait for the showdown that caps Week 17.

The 49ers and Chiefs could very well meet in the Super Bowl. Again, Cincinnati is 3-0 of late against Kansas City and is, in fact, the defending AFC champion, hence why they're No. 2. Aaaaaaand Brock Purdy is an awesome story and all HOWEVER…he's the reason San Francisco is third. I can't know what he'll do in the playoffs at this point. Need to see more.