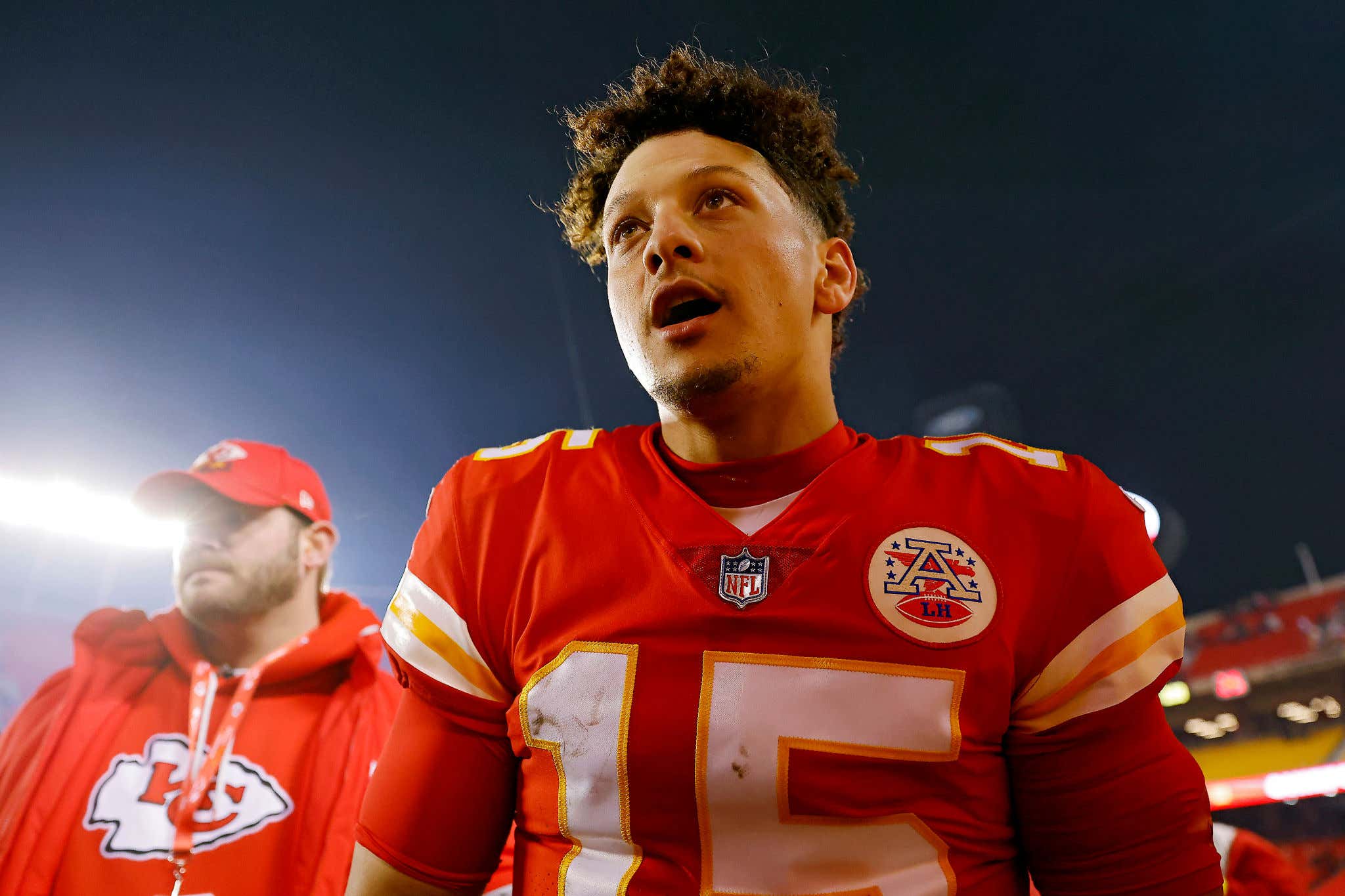 I don't recall getting this deep into an NFL season and genuinely believing that almost a quarter of the league's teams have a real chance at lifting the Lombardi Trophy at the end of the playoffs. Here we are.

We're seeing another brutal reality play out in real time, though. Pursuing a championship at all costs comes at…well, a cost.

The wording of that last sentence reminds me of this classic line that I think I've used in GIF form before on a blog.

Mortgaging the future to acquire Russell Wilson was supposed to be the move that put the quarterback-starved Broncos over the hump. They followed the Rams' "fuck them picks" blueprint after LA traded for Matthew Stafford and won a Super Bowl in his first season under center.

Both those acquisitions have backfired spectacularly. Denver is trapped with Wilson's albatross of a contract, while the Rams' multiple years of sacrificing premium draft assets and constructing a top-heavy roster finally backfired on them in a big way.

Speaking of similar-minded front offices, Mickey Loomis and the Saints have performed dizzying salary cap gymnastics in recent years just to keep their veteran core together. Unfortunately, once Drew Brees retired, they had zero viable succession plans. Now they're floundering in a big way.

You could argue some teams are actually worse than these three, but look at the upcoming draft order if the season ended today:

The "It Behooves Us To Lose" Tier

Once Lovie Smith benched signal-caller Davis Mills — who happens to be GM Nick Caserio's first draft pick with the Texans — it felt like Lovie situated himself to be the second straight one-and-done coach in Houston. Just throw in the towel, guys. Get your young players some reps, except maybe rest Dameon Pierce and just…lock up that No. 1 overall pick for a new QB or Will Anderson.

Chicago is in good shape. Tons of cap room coming up in 2023. Justin Fields is hurt. By no means should you let him play. Shut it down. SHUT IT DOWN. DO YOU HEAR ME!? FOR THE LOVE OF ALL THAT IS HOLY, SHUT IT DOWN.

Oh the Panthers…Sam Darnold looked better in that win over the Broncos than I think I've ever seen him look in the NFL. Is Carolina about to go on a run? Would prefer if they don't, just in case they somehow come out on top in that ass NFC South division.

Were I the Packers, I'd play Jordan Love, especially since Aaron Rodgers is dealing with a broken throwing thumb and now an injury to his ribs. See what you have in Love.

Looking at Indianapolis, they actually haven't played that bad under Jeff Saturday. Your ceiling is just limited because Matt Ryan is a turnover machine. Sit Jonathan Taylor to preserve his health. Lose out. The ultimate underdog interim coach Saturday is the perfect fall guy. Get yourself in a better spot to challenge for the trashy AFC South next season and beyond.

So many close games for the Falcons. They keep inventing new ways to lose. Never been the same since that 28-3 blown Super Bowl lead. I think we all know that. I really don't want to see Atlanta sneak into a No. 4 seed by winning the NFC South. Let's hope Tampa Bay doesn't let that happen. Nobody wants Marcus Mariota hosting a playoff game.

The Steelers are hanging on by a thread and were lucky Indianapolis had a fumble right near the goal line. Otherwise, I doubt they win that Monday night contest. At 4-7 and with two far more intriguing teams in the AFC North, Pittsburgh should just soft tank for a higher draft pick the rest of the way.

Arizona is an unmitigated disaster and somehow aren't the biggest circus in the NFC West. When Kliff Kingsbury inevitably gets fired, good luck to the coach who has to rein in Kyler Murray. Kingsbury was Kyler's guy. I'd argue no coach on Earth was a better fit for him. Nightmare fuel in the desert.

The Spunky But Unlikable Tier

The Spunky And Likable Tier

I'm not going to die on the hill of the Raiders making the playoffs even though I picked them to do so before the season, and even though they're 4-7 with three losses in which they blew insanely large leads and should most definitely be 7-4 right now. Whatevs. No big deal. I'm not bitter about Las Vegas' inability to slam the door earlier in the season. Not at all.

The Lovable Lions almost beat Buffalo on Thanksgiving. In classic Lions fashion, couldn't quite close the deal. Everyone said that outcome boiled down to Jared Goff panicking and not having an answer against Cover Zero, whereas Josh Allen fired an absolute missile to set up the winning field goal after that. I don't think it's that simple. Detroit needs to play almost flawless football from here on in to make a Cinderella run to the postseason. Can't 100% dismiss them.

Aaaaaand speaking of teams who can't close the deal, Jacksonville flipped the script in a stunning rally to upset the Ravens this past Sunday. Trevor Lawrence played lights-out in the fourth quarter save for a sack fumble that the Jags recovered. Like the Raiders, there's no reason Jacksonville shouldn't have a winning record to this point. Alas…it might take running the table to backdoor into the playoffs.

To reiterate from last week, these teams are pretenders. We're already seeing the G-Men and Seahawks lose steam. New York's lack of pass-catching weaponry and Seattle's defense is pretty awful outside of rookie phenom Tariq Woolen at cornerback. Those flaws can only be masked for so long. That said, Geno Smith is still one of the best stories in all of football.

In the Commanders' case, spunky backup QB Taylor Heinicke leads the NFL in rate of turnover-worthy plays with a staggering 6.1% clip, per PFF. The dam is going to break at some point. Heinicke is due for a three-INT outing any time now.

Finally, we all know the issues with the Chargers. They squeaked out a victory over the Cardinals in Week 12, are injured as fuck, have a defensive head coach who can't get his defense to execute, and Justin Herbert is prone to untimely miscues (not all his fault). Not buying the Bolts, sorry.

The Can’t Count Them Out Tier

Let's start this subsection with Mike White. Holy hell, what a performance in a driving rainstorm. Haters will say it was against the Bears and is therefore negligible. Tell me when Zach Wilson has looked anywhere close to as good as White did. All the Jets players were so hyped for him in a way they've never shown support for Wilson. If White keeps playing like this, Gang Green is very, very dangerous. I'm just tempering my expectations because White needs to sustain his high level of play, and the Jets also play in the brutal AFC East.

The Bucs and Pats are here for the second straight week simply because of Tom Brady and Bill Belichick. They're both leading unspectacular football teams that might still find a way into the postseason. I'm waiting for New England and Tampa to hit their stride. Don't we all know by now not to doubt TB12 and The Hoodie regardless of the circumstances? Also…they might be reuniting so that's cool.

I was wrong about the Vikings. I thought New England was going to undress them on Thanksgiving and while Pats QB Mac Jones had maybe the best start of his young career, Kirk Cousins rose to the prime-time occasion and moved the ball at will on New England despite a lackluster rushing attack to support him. Impressive 33-26 win.

Seems like the pressure is getting to Lamar Jackson a little bit as he bets on himself for that massive second contract. Doesn't help that Baltimore's passing schemes aren't the best and that tight end Mark Andrews is Jackson's only surefire target to lean on. So much is at stake for the Ravens and Jackson during the home stretch. Titillating stuff.

As long as Mike Vrabel and Derrick Henry have a pulse, the Titans should be winning the AFC South or at least in the Wild Card mix. Nobody wants any part of them, ever. They're nasty and physical on both sides of the ball. Sadly for Ryan Tannehill, Tennessee has awful pass protection, a beat-up o-line and not enough skill position talent to hang with the NFL's elite.

I doubt there's a head coach-QB combo more driven to shut everyone the fuck up than Mike McCarthy and Dak Prescott. That's something the Cowboys can rally around. Well, that and runaway Defensive Player of the Year Micah Parsons.

Buffalo is banged up at two of their most pivotal spots. Josh Allen isn't 100%. At some point, all the hits he takes as a runner are liable to catch up to him. Losing Von Miller to a knee injury is brutal, too. Those ominous developments notwithstanding, the Bills are still 8-3 with everything in front of them.

We'll learn a lot more about Miami and San Francisco when they square off this weekend. Outside of the Bengals-Chiefs matchup, that's easily my most anticipated one. I feel like Mike McDaniel can outfox Kyle Shanahan in terms of scheming. The question is, can the Fins' electric offense overcome the Niners' elite defense?

Philly just designated mammoth rookie defensive tackle Jordan Davis to return from IR, which is such a big boon for their rotation up front. No question the Eagles are in an ideal spot with a 10-1 mark and an inside track to the No. 1 seed.

Aaaaaaand I still put the Chiefs atop the NFL power rankings. Just don't be surprised if they lose their third straight meeting with the Bengals in Cincinnati on Sunday. Sorry to bury some of my objectivity for the last couple sentences but WHO DEYYYYYYYY.