Unless you were hiding under a rock this past weekend, you should be well aware of the fraud that took place. I saw it all with my very own eyes. Hucksters profiting from overhyping their true value and tricking people into buying-in and getting their hopes up based solely on a number backed by nothing but pure speculation. I'm of course talking about the Minnesota Vikings.

The Vikings beat the Super Bowl favorite Buffalo Bills on their home turf Sunday after trailing by 17 toward the end of the third quarter. Sure, the comeback was nice and all but I don't buy it. It's easy to be the guy to call out a team as a fraud when they lose - but it takes cajones to do so after a statement victory like the Vikings had Sunday. Like Jordan said: "when you're ahead, it's easy to talk trash". And I know what I'm getting myself into. I've lived in Minnesota for a year so I know how ferocious Minnesotans can get. I'm ready for all the mean-spirited "I respectfully disagree!" tweets.

8-1 certainly makes the Vikings a good team. That's not an argument. But to say they are what their record says they are would be an absolute farse not backed by the numbers nor their leader Kirk Daniel Cousins (KDC). I did my due diligence to see KDC for what he truly is - a basic quarterback. Just like he always has been. Just like he always will be.

But let's start with the team overall. You might think 8-1 speaks for itself, but out of 73 teams with an 8-1 record since the merger, the Vikings have the second worst point differential: 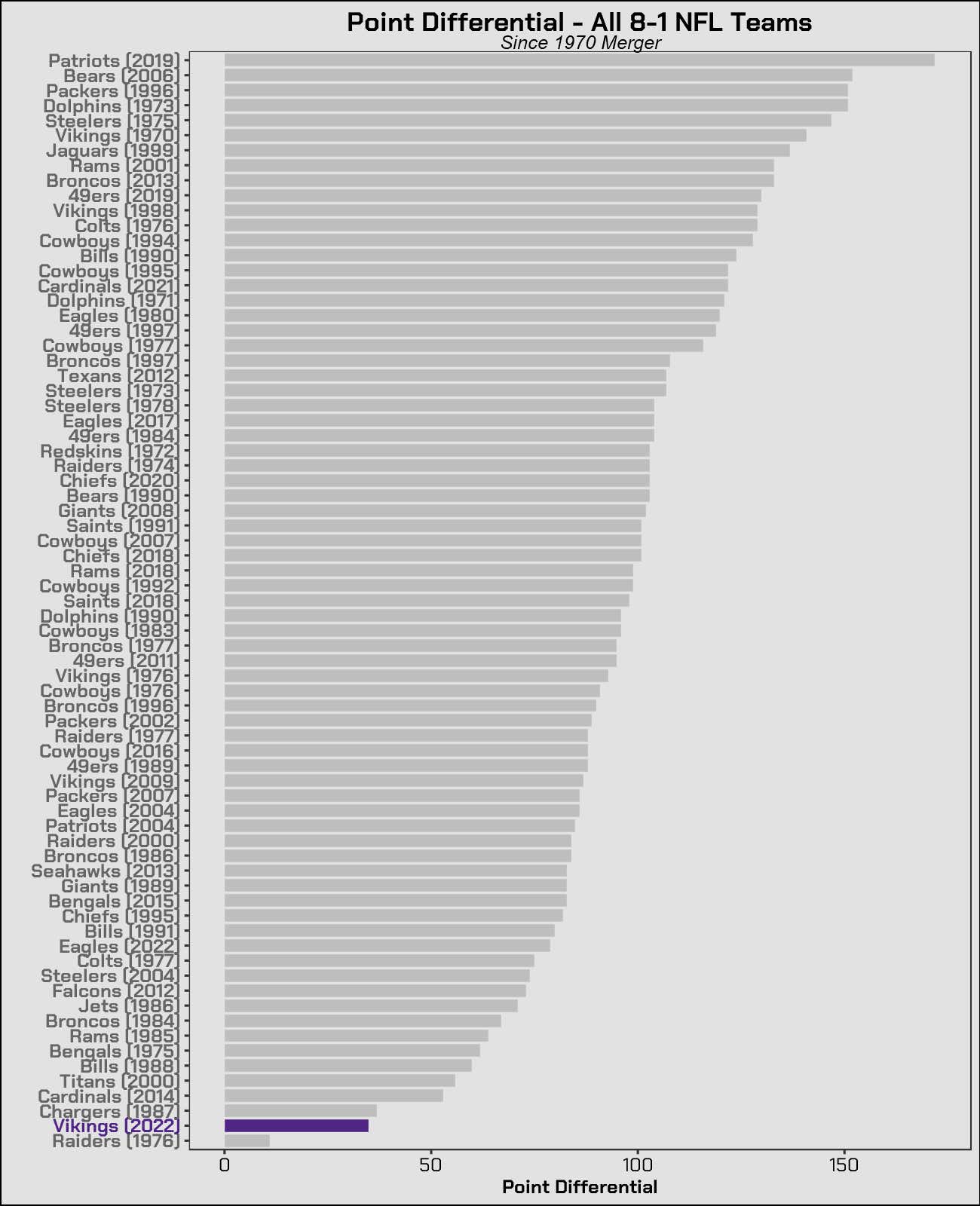 I'm well aware that the 1976 Raiders won the Super Bowl but let's not compare a first year coach with the GOAT, John Madden. The fact of the matter is the Vikings are just a quality team who will certainly make the playoffs and be competitive until the big dogs turn up when the moment matters.

Let's talk KDC. You see, before Kirk Thuggins started acting like the Wolf of Wallstreet on the team plane, KDC has been a middle of the road fund-manager like he's always been no matter how you dice the numbers. Here's some quick 2022 KDC facts: he's only 11th in yards per game, 19th in completion percentage, 19th in QBR, and 16th in QB Rating. And get this: he's 23rd in yards per attempt barely outdueling the likes of Baker Mayfield. And it's not like they have the 2000 Ravens defense here either as they rank 13th in points given up. Everything about this team including the region of the country they live in is mid - except their fraudulent record.

I'd have been open to this team being for real if I saw any appreciable production value from KDC. But the fact is he hasn't improved on ANYTHING this year to help explain this team's current 8-1 valuation. It's all make believe. Below are a couple of graphs showing a rolling three-game average across KDC's career games for touchdowns and passing yards. After becoming adequate after his first couple years he's basically flattened out all around. 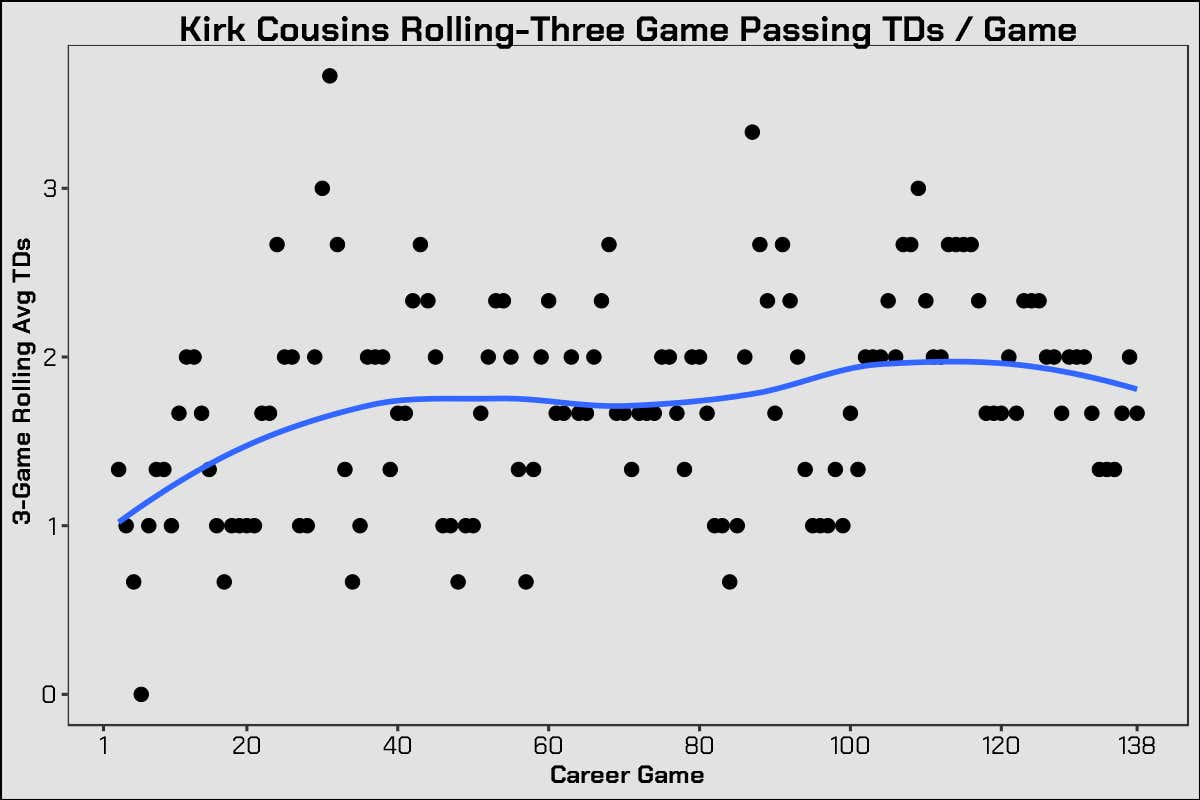 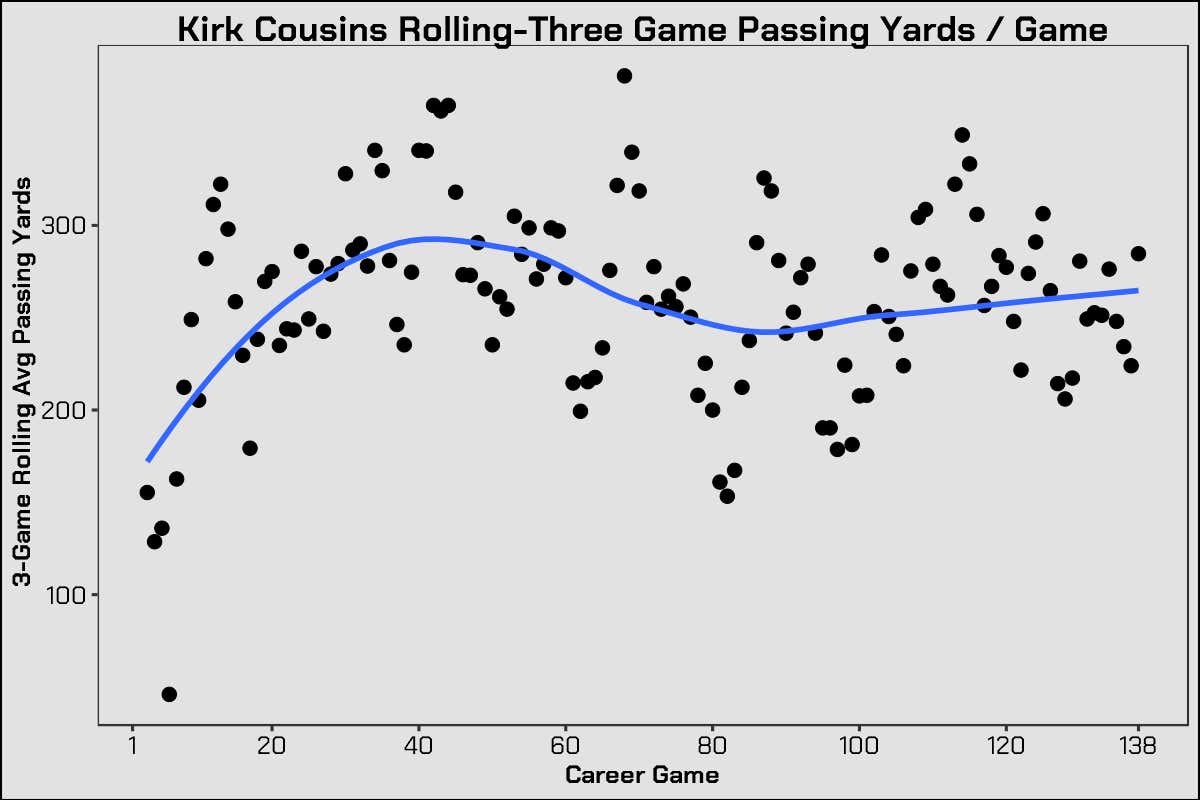 And finally, here's the same for yards per attempt which is one of the more respected quarterback stats. Sometimes the data just screams at you to connect the dots of truth. And as you can see he's recently taken a nose dive to finish drawing out the blue "m" for mid trendline. 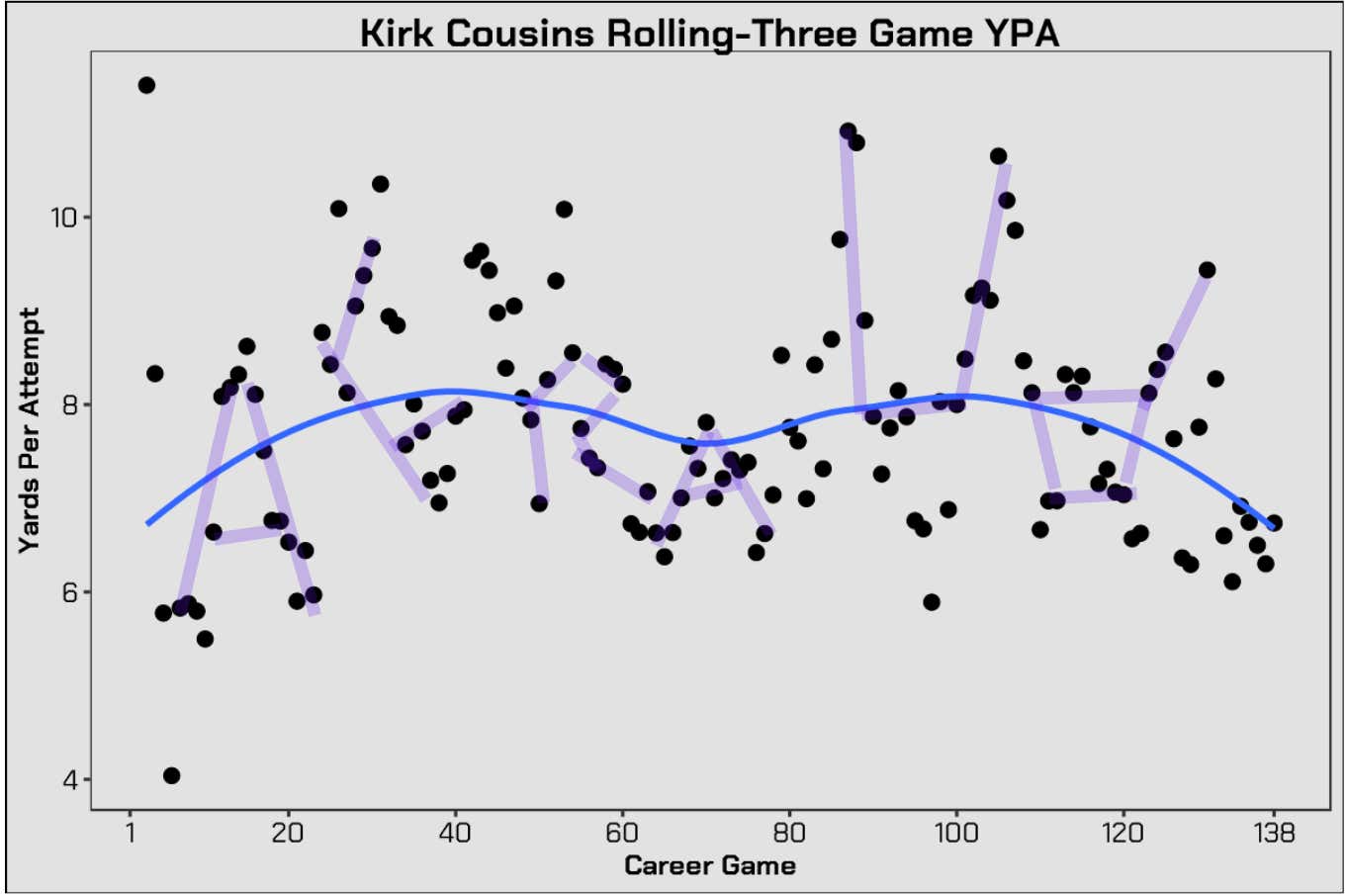 This Vikings team has "one playoff win and get clobbered the following week by 17" vibes. They are fraudulent and I can't let the good people of Minnesota have their hearts crushed in January. Just know you've been warned. If I'm wrong, I look forward to your barbarous mean-spirited "looks like you were mistaken, ay?" replies.