I hate to be the bearer of bad news, especially as the leader of the #SonsOfUribe clan, but it appears as though #FrankWasRight. The Mets are exactly who we thought they were - the Mets. An organization that constantly fucks up, chokes, has to constantly deal with bad PR situations, and especially doesn't win. At least they haven't won shit. Not yet they haven't.

And that's exactly my point. The Mets haven't won DICK yet like your boy KFC would have lead you to believe in July. Sure, they still might win it all, rendering this whole blog pointless. But they haven't, and we've seen this movie before. We'll get to all that in a moment.

Now, I will state that I am VERY on the record as saying that baseball needs more Steve Cohens and less Jerry Reinsdorfs. That in order for baseball to really, truly be at its best that there needs to be 30 owners that are hellbent on nothing but victory and treat their organizations like toys like Cohen does instead of business ventures like Reinsdorf does. That's how you get parity - by having 30 teams competing for the best free agents and not the same 4-5.

But like I said, until the Mets win it all... they're still the Mets. As a White Sox fan, nobody knows that more than me other than Mets fans. Mets fans should know that they root for a cursed franchise. A franchise that's 2nd in its own town and that constantly fucks up no matter how talented the roster is, how good of a front office they have, or how sharp their manager is. The Mets do Mets things. Always have, always will. The White Sox sold their souls for 2005, the Mets sold their souls for 1986.

That's just how it is.

Nobody should fuck with that, either. Especially not your boy KFC, who turned into the COCKIEST fucking dude on earth this summer. Doesn't matter that the Mets were like 1,000,000/1 favorites to win the East at a few separate points this summer:

He should know how this works at this point. I mean, this guy hasn't seen a championship out of ANY team he roots for. Not ever. 1986 doesn't count because I assume he can't remember it. If anyone should know that the Mets are the Mets, it should be KFC. Doesn't matter that Uncle Stevie bought the team to save the day.

What matters is this: KFC is fucking with the black magic that is Jerry Reinsdorf. Come mid-Summer, KFC kept going off about "The Curse of Reinsdorf:

Look, Kevin, nobody hates Jerry Reinsdorf more than White Sox fans. He ruins our lives. He's been good for a playoff run like 1 season out of every 8 since he's been the chairman. But we know as White Sox fans we are stuck with him. As far as I'm aware, he's immortal and will own the White Sox the entirety of my life.

But you are stuck with him now too. You think Steve Cohen is some magician because he's got a big check book? Oh no no no no no kimosabe!!! There is NOTHING more powerful than Jerry Reinsdorf's black magic. You fuck with that, and you will be smited by the baseball gods, the juju lords and most of all, Jerry Reinsdorf's black magic for the rest of eternity. Uncle Stevie even told you this himself!!! 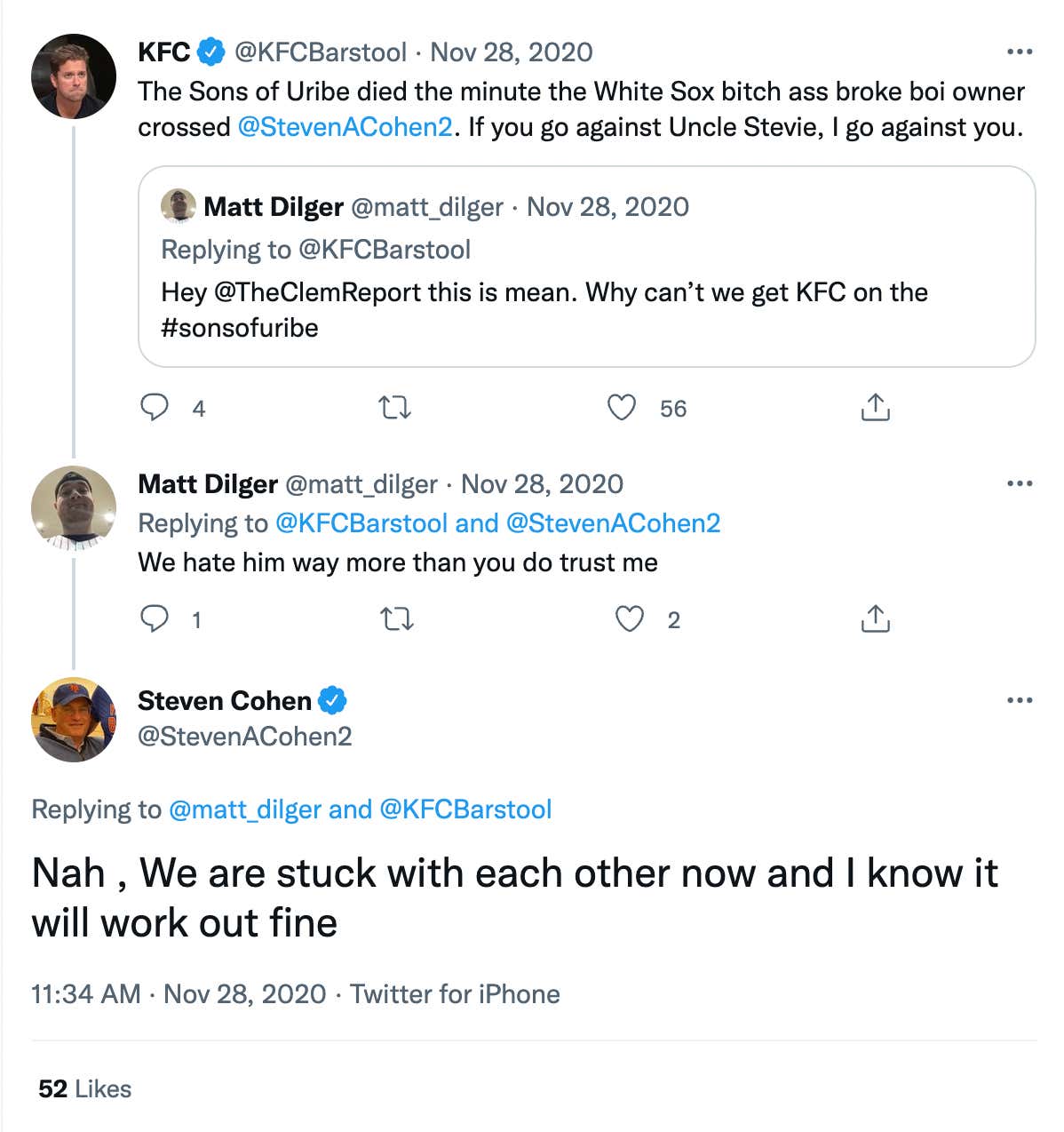 Not even a 10.5 game division lead in the 2nd half of the season is a good enough shield. If anyone is to be blamed for the Mets blowing that big of a lead, it's not management, or injuries, or lack of offense, or anything else. It's you opening your mouth and inviting Jerry Reinsdorf to rub his stink on your team. Call him out if you'd like - all you're doing is opening a portal into the hellscape that is Jerry Reinsdorf's vengeful brain. He didn't want Cohen because he knew Cohen would want to win baseball games, which is OUT OF THE QUESTION in Jerry Reinsdorf's league and what Jerry says, goes.

Moral of the story is this: don't ever fuck with Jerry Reinsdorf's black magic if you don't have to. You do NOT want to be in those crosshairs, and Kevin is a complete doofus for it. If anyone wants to blame the Mets collapse, blame him. He did this. Nobody else did.