^^^We break the entire thing down on an emergency podcast episode^^^

I implore you to watch the full hand above. From start to finish, it makes no sense.

If you are new to poker, Garrett (Gman) is one of the best players in the world. He's very level-headed, almost to a fault. Nothing sets him off, ever. He's as cool, calm, and collected at the poker table as possible.

The lady, Robbi, is very new to poker. She is quite rich, and has been playing on these streams...to the best of her ability. While Gman is world class, Robbi is as amateur as they get.

Here is the full hand history in case you can't watch the video above:

When the 3h hit on the turn, the wackiness began despite neither player improving their hand. Adelstein bet again, this time for $10,000 before his opponent min-raised it to $20,000. The Los Angeles high-stakes poker legend then went for a three-bet all in shove, making it $109,000 for Lew to call.

With no draw and just jack-high and only one card to come, there wasn't much for her to do but fold. Well, one would think. She instead opted to make the call, and the players agreed to run it twice. Both run-outs were bricks, and Adelstein knew there was no way he could win with eight-high. He smiled and was clearly ready to accept defeat until he saw her hand, and then sat there in disbelief before some drama ensued.

She called with Jack high, no draw.

Garrett, who never tilts, was understandably confused. And Robbi didn't really do a good job of defending herself or her call, claiming she called with Jack high because she thought Garrett had Ace high…which obviously makes no sense.

And this is when things get even weirder:

According to Garrett, the two of them spoke with the founder of the stream and Robbi then decided to GIVE HIM THE MONEY BACK. 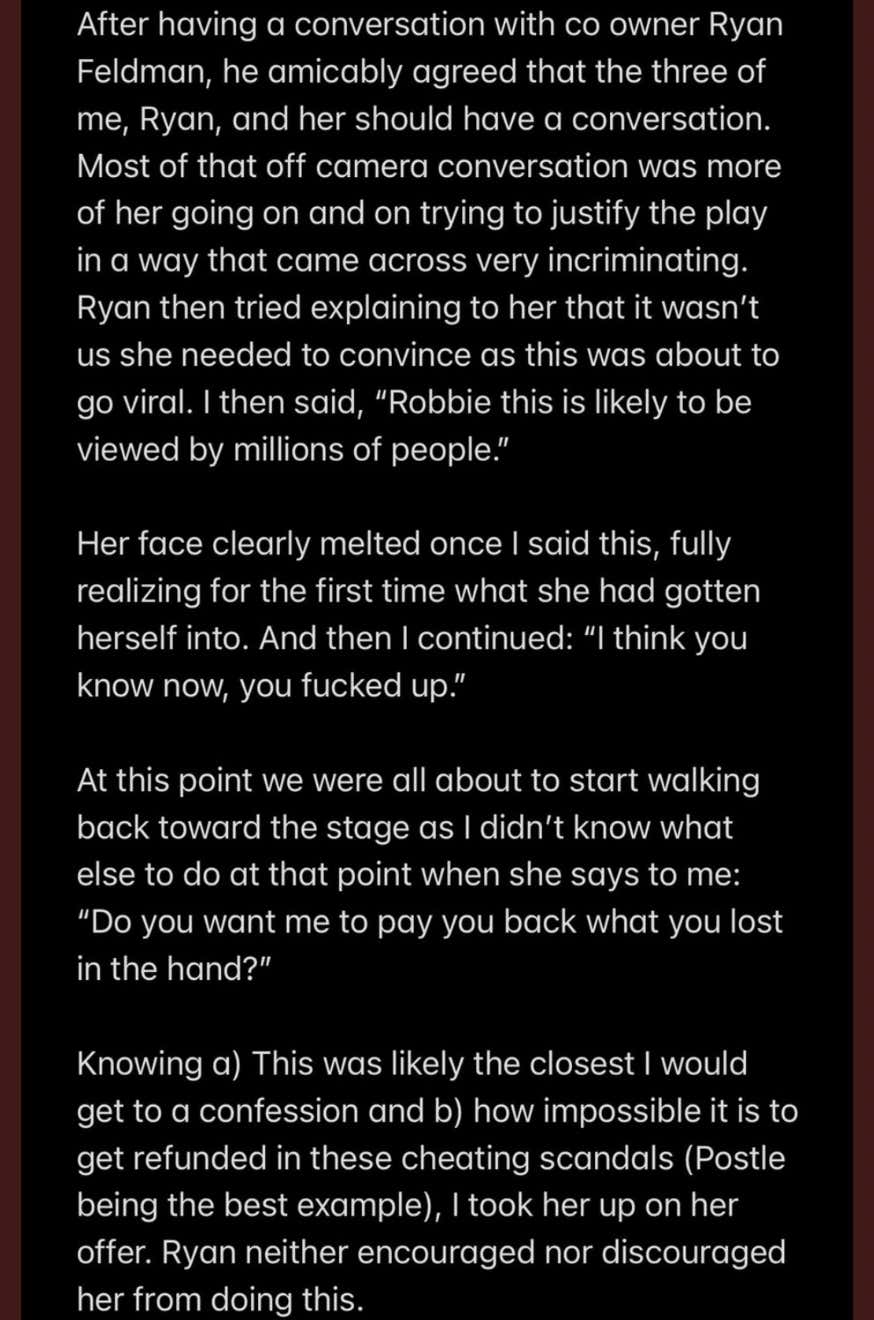 Why would she pay him the money back? Is that an admission of guilt? Or was she simply trying to make the drama end? Did she feel threatened or bullied by Garrett? And if so, is that reason enough to pay someone back $135,000? If you feel you earned that money, would you ever give it back because someone is upset with how you got it? 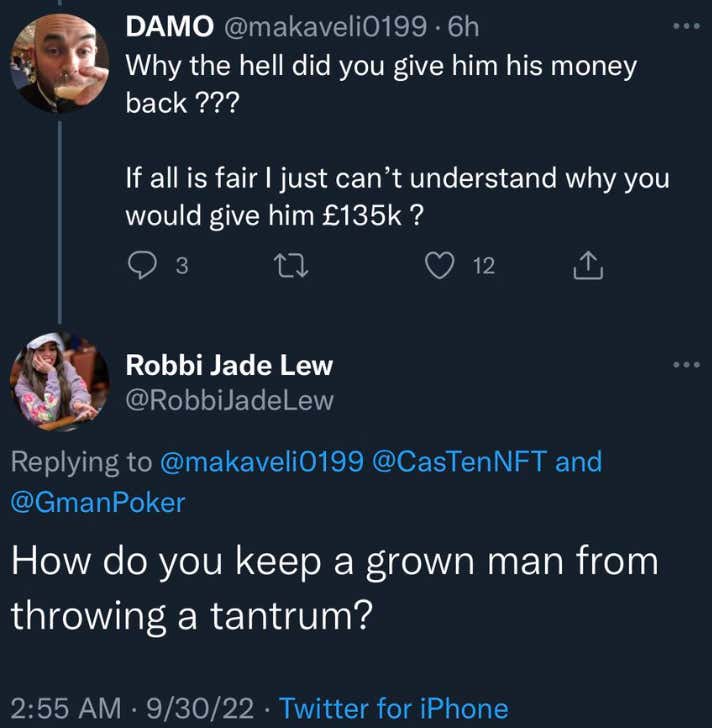 So odd. So weird.

And then on the other side of the argument, how is Garrett SO SURE he was cheated? 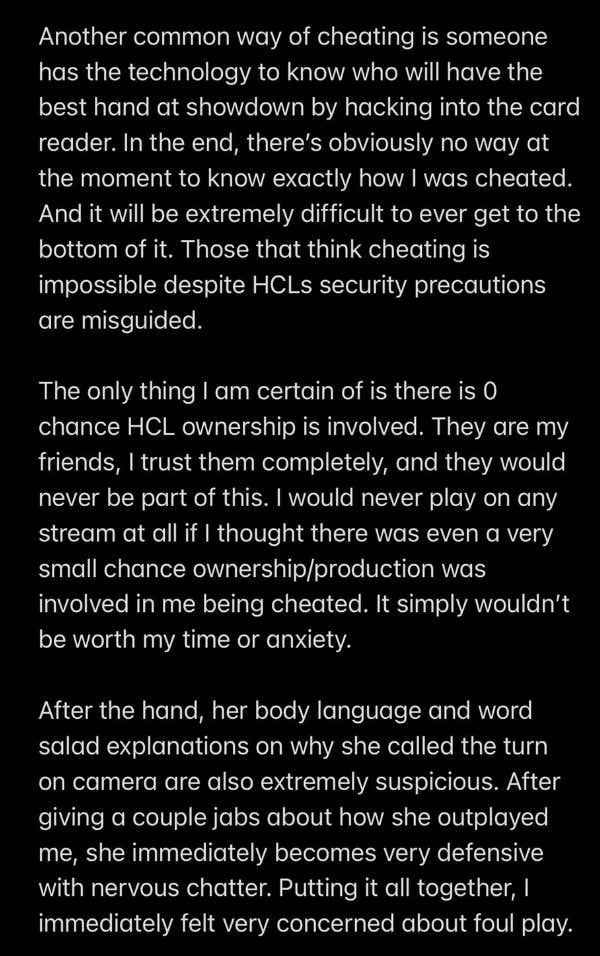 And then come more questions- why would she choose THAT HAND to cheat with? There's so many less conspicuous spots to cheat in, this one would make no sense. But then why would she offer him a refund? That's odd too. And then her story changed like 5 different times. First she said she had a 3, but then said she misremembered her hand, then she decided to fully double down and be like "I rule you drool".

If she said this from the very beginning "I know I played it poorly but just wanted to try and get lucky", everyone would say "okay". But she tried to save face and tried to use poker logic, and none of it made sense. There's also the chance she was flustered and wanted to look like a great player, which she's not, but didn't want her image to be shitty. So she tried to pretend she was some genius, when in reality it makes much more sense if she was like "yeah I don't know what I'm doing".

Garrett was rightfully confused and angry. None of his hand makes sense. There is still a chance he was cheated, for sure. I am not ruling that out.

Robbi handled this pretty poorly. There is also the fact her business partner was at the table with her. That's a whole other wrinkle. Very odd.

And then there are things we might not even know about. Let's say she was cheating- who was in on it? Maybe it's like something out of a movie, when a waitress yells "cocktails!" Robbi knows to make the call. I can get deeper and deeper into conspiracies, it's always fun to speculate on the "how".

At the end of the day, it would be a really stupid spot to cheat. It's such a weird situation- Garrett so positive he was cheated, her giving back the money but denying any wrongdoing, and it all being on stream, now with millions of views across all platforms. What benefit would she have to cheat in that spot? And why would someone with as much money as Garrett (a lot of money!) freak out over this one hand unless he was so positive something shady was up? It's all so, so, so strange.

Hustler is launching a full investigation:

I do not think they will find any wrongdoing. I am interested in Garrett's next move, however. Will he walk it back? Or will he maintain he was wronged? Or has he been right this whole time? The thing with Garrett is he is rarely wrong about things like this. He would not make cheating allegations lightly. It's just another reason this situation is so fascinating.

We will be recording a bonus episode of Cracking Aces at noon to discuss all of this (now up!). So make sure to check that out.

Additionally, it was a great week for the podcast, as co-host Jake won a tournament for $50k. So that was neat. And Rampage called in to talk about his $200,000 score.