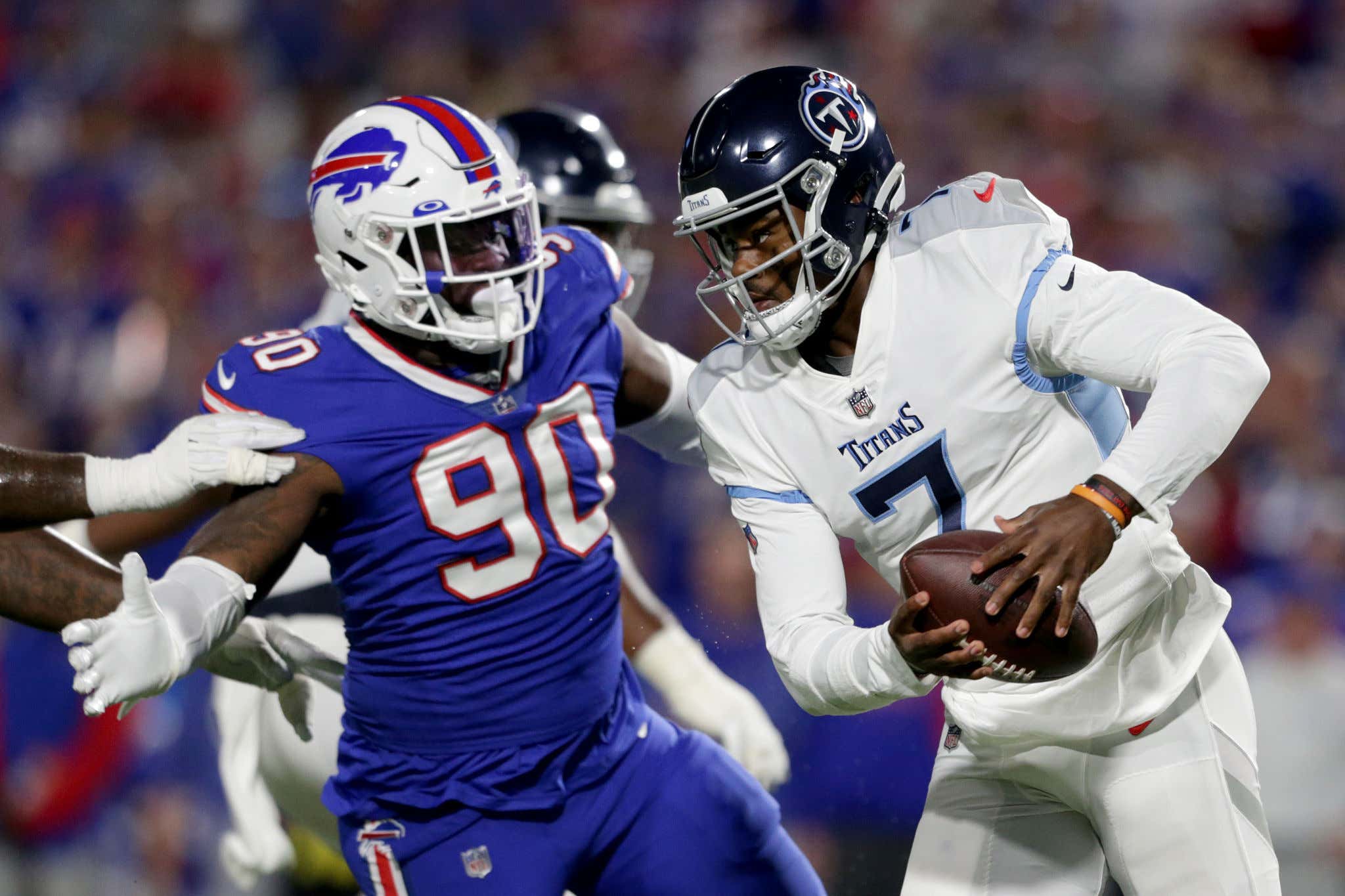 The question posed in that headline is slightly mischievous and a means to rile up the Tennessee Titans fan base, but it's not entirely without merit. I'm not saying Malik Willis is anywhere near ready to be a franchise quarterback. He's a raw, third-round rookie who played at Liberty. What I am saying is, based on how swiftly Ryan Tannehill got yanked following this pick-six…

…Maybe Mike Vrabel is sending a message. In some form or fashion, it could be, "Uh yeah Ryan buddy guess what? Your job isn't guaranteed, fam."

Alternatively and more likely, the reigning Coach of the Year is using this as a dual motivational and preservation tactic to snap Tannehill out of his funk. Frankly, after blowing a home AFC Divisional Round game against the Bengals with three INTs as the No. 1 seed, I'm not sure Tannehill will ever be the same.

I said before the draft I thought Willis' ceiling as a prospect was about 85% of Bills QB Josh Allen. That may have been overselling it, not because of any potential Willis lacks, but because of how much better Allen keeps getting. Dude is a MONSTER.

Even an eventual 75% of Allen must sound great to Vrabel based on his general state of mind on Monday night. Although it's unclear if Willis can provide that caliber of play someday, this is the body language of a coach who realizes his current guy ain't nowhere near:

Don't shoot the messenger here. It seems at least one local, verified Nashville radio personality is among those who believe, yes, this will at least be perceived as the beginning of the end for Tannehill's tenure:

I'm not going to sit here and pretend Willis is better than Tannehill. He completed one of four passes for six yards, carried the ball four times for 16 yards and lost a fumble. Almost threw a pick on his first attempt, too. The young gun is not the polished passer his veteran superior is. Nor can he read a defense the way Tannehill can.

Additionally, the Buffalo Bills are an absolute buzzsaw. They shut down Derrick Henry all night, and very few QBs, much less Tannehill, can beat a quality team on the road with no running game and a dearth of viable wide receivers to work with.

Tennessee may at least consider giving Willis some kind of role in the offense. Starting him over Tannehill is out of the question and would be such a knee-jerk overreaction post-Week 2. Tannehill can only elevate a lackluster cast of pass-catchers so much, so the Titans could decide to run some Willis-centric packages of college-style concepts to capitalize on his dual-threat skill set.

Tannehill is an excellent athlete in his own right, yet he doesn't have the juice, acceleration or field-stretching arm Willis boasts. You could present defenses with serious problems at the mesh point of read-option/RPO plays with Willis and Derrick Henry next to each other. The AFC South may wind up being the shittiest division of all-time at this rate. I imagine any edge Tennessee can get to defend the divisional crown following a 0-2 start would be welcomed with open arms.

Ryan Tannehill reading any remote suggestion that he won't be the unquestioned starter playing 100% of snaps at QB going forward: