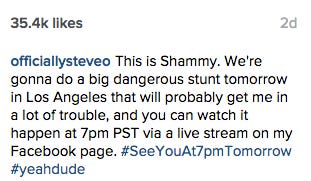 “Jackass” star Steve-O was released on bail Monday after an anti-SeaWorld stunt atop a construction crane in Hollywood landed him in jail. Just before he was arrested Sunday night, the stunt performer, whose real name is Stephen Glover, asked his Facebook followers, “Anyone wanna bail me out of jail?” He was taken into custody on suspicion of trespassing, said Los Angeles police Officer Jack Richter. Glover was released at 10:50 a.m. Monday on $5,000 bail. He is scheduled to appear in court Aug. 31. The stunt drew more than 80 firefighters and dozens of Los Angeles police officers to the 8000 block of West Selma Avenue about 8 p.m. following reports of a possible suicide attempt after a man was spotted on the crane. Firefighters prepared an air cushion, but the comedian and television personality star had other plans. As Glover, 41, filmed the entire stunt, posting photographs and video on Facebook, he carried an inflatable orca and wore a “Blackfish” T-shirt as he scaled the crane. “Blackfish” is a documentary on orcas on captivity. 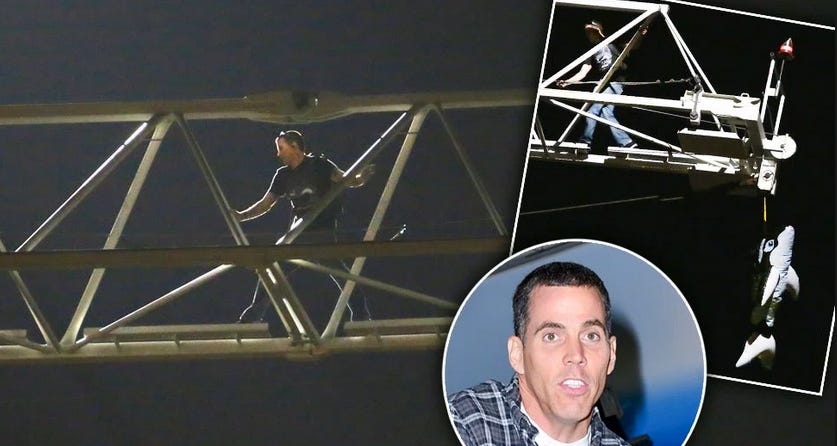 When it comes to Steve-O, there’s not such thing as bad news. Every day he’s alive, we’re alive. Because this dude was on the verge of death every day for probably a good 10 years. When it comes to people who sneaky were big parts of every mid-20’s male childhood, Steve-O and the guys from Jackass are sorely overlooked. I mean the shit they did for our entertainment is insane. Doesn’t Johnny Knoxville have a broken dick or something like that? Steve-O put so many things up his asshole to make us laugh he deserves a Purple Heart. So to see him stay in the news for protesting Sea World, more power to him. I support whatever Steve-O supports. And round of applause for not jumping off the crane into a baby pool full of cow shit. That’s what old Steve-O would do. New Steve-O just climbs 100 foot cranes without ropes and dangles an inflatable whale. That’s called progress, folks.

PS: This picture has been making the rounds on Facebook the last 2 weeks or so. Kinda depressing, kinda makes you think a bit. (The red is the parking lot, the green is where giant Orcas spend their entire lives) 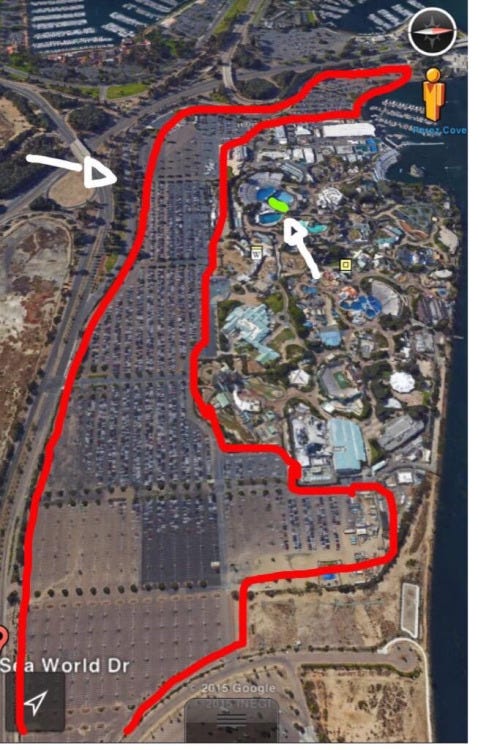