Pro Football Talk- The grass at Soldier Field is in rough shape today, just an hour before the Bears’ preseason opener against the Chiefs.

Pictures on social media show the grass with divots and pockmarks, with the field in the kind of condition that often leads players to complain — and sometimes leads to injuries.

There’s a famous saying that goes “how you do anything is how you do everything.” Which means even the small stuff you don’t necessarily think has an impact in the grand scheme of things does. And how you do those small things equates to how you do the big things.

The turf at Soldier Field is the epitome of the Chicago Bears.

Humans have been planting grass for hundreds of years. It started as a flex by aristocrats to rub in the peasants faces they had so much money and land they could afford to “waste” with just grass rather than plants for food production. It was a status symbol.

Players, coaches, and fans bitching about Soldier Field’s playing surface is nothing new.

Bears kicker Cairo Santos just last week was criticizing its upkeep, and pointing out that its durability was kind of important to the notion of field goal kicking.

“Especially Week 1, our first game of the season,” Santos said, via Jason Leiser of the Chicago Sun-Times. “I’ve seen better. It’s just what we have to deal with. The less of a problem you make it in your mind, it helps you overcome it and just go.”

The NFL’s worst field conditions are so bad that Santos said he practices on poorly maintained public parks in Florida to prepare him for what he faces at Soldier Field.

“I was going to a turf field at a high school, which was perfect,” Santos said. “It was almost like, ‘OK, I’m getting too comfortable.’ So in my neighborhood, there’s a soccer field, and the grass is a Bermuda grass. It’s real long. I was like, ‘OK. This is more like it.’

“The ball flies different. It’s not super even all the time. . . . It’s important to put yourself in that situation.”

That is just so laughable it’s sad.

I wrote a blog last season after Adam Schefter tore his knee up slipping on Soldier Field calling it the worst playing conditions in pro sports.

Washington fans were quick to jump at that claim and defend their shit hole stadium, FedEx Field, saying they in fact had the worst field in sports. (I guess when you suck that bad you’ll take any title you can). But I still maintain Soldier Is worse.

I mean we’re talking preseason game 1 here. The only action this turf has seen this summer has been a few friendly soccer matches and an Elton John concert. Yet the field looks like Riggs and Trent just played 36 on it. Pathetic. 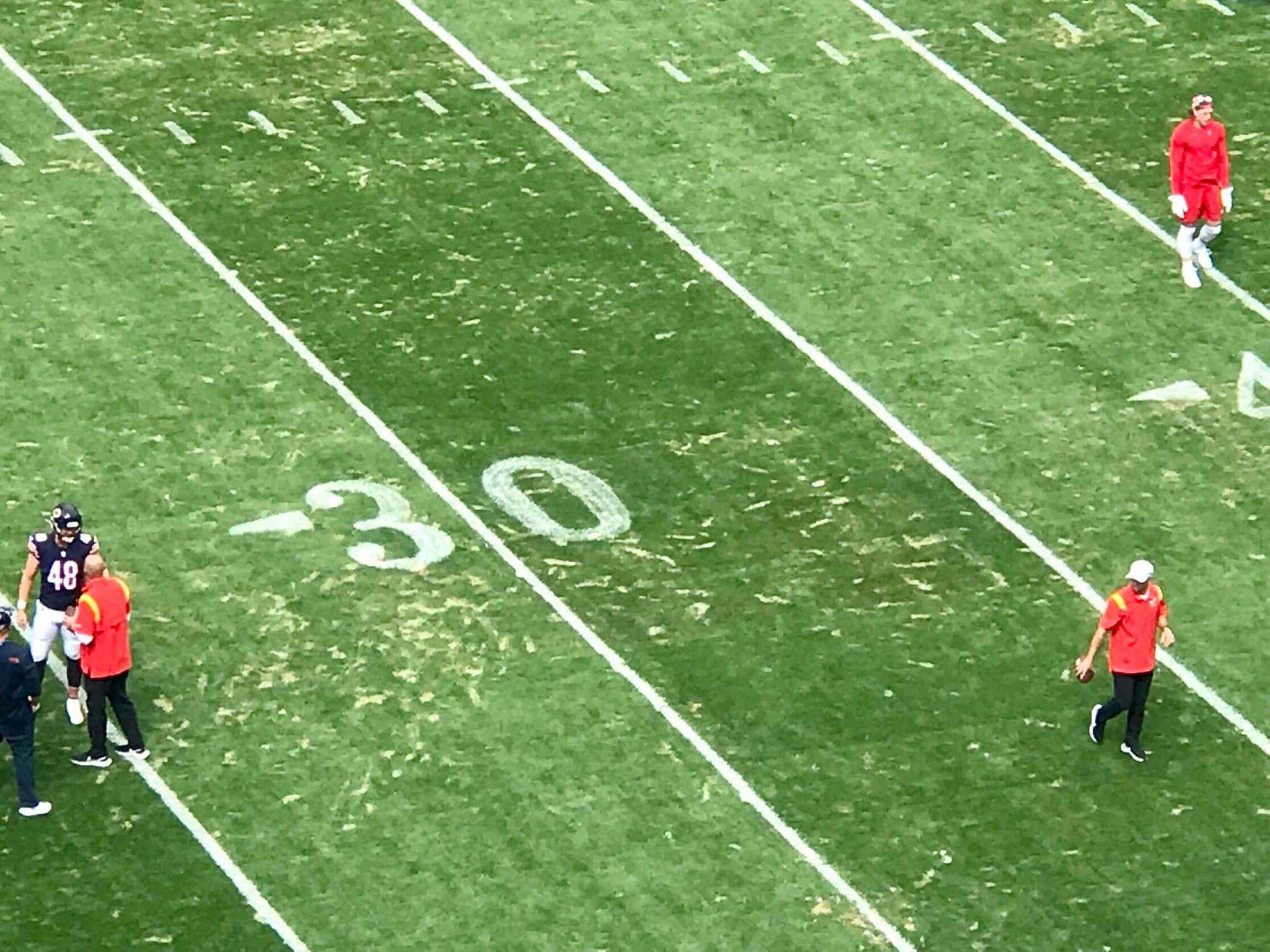 These are just some of the luxuries you are afforded as a member of the Chicago Bears.  You get to play 8 games a season on sod maintained by city workers of the Chicago Parks District (true story). Just another reason the McCaskey’s are high-tailing it the fuck out of this dumpster fire.

I know it’d never happen because football players are football tough, but if I’m the Chiefs, or anybody worth a shit on the Bears, I’m taking one look at this field and saying “yah, no thanks. We’re not playing on that.” Make a real statement and get the Bears/city of Chicago to clean up its act.

Public shaming on twitter and on the stool isn’t doing anything.

p.s.- I feel annoying always tying things into the Patriots but I met Roosevelt Colvin once at a post-game party and was shooting the shit with him about coming from Chicago to Foxboro. He said it was culture shock that took him months to get used to. Everything from how practices were handled (zero time wasted, he said the Patriots got more done and accomplished more in a single practice than his Bears defenses could in a week). He said Tuesday meetings in New England felt “presidential,” and everybody knew when they walked into the room phones were off, conversations ended, and everybody was there to work. I asked how that was different than Halas Hall and he just laughed and said night and day. Just as a fish rots from the head down, it all starts at the top. Clown owners hire clown front offices, which hire clown head coaches, etc, etc. All this city wants is a successful football team. Chicago is a Bears town. When the Bears are just decent this place comes alive and is electric. Bears fans have been through hell for decades and deserve much, much much better.