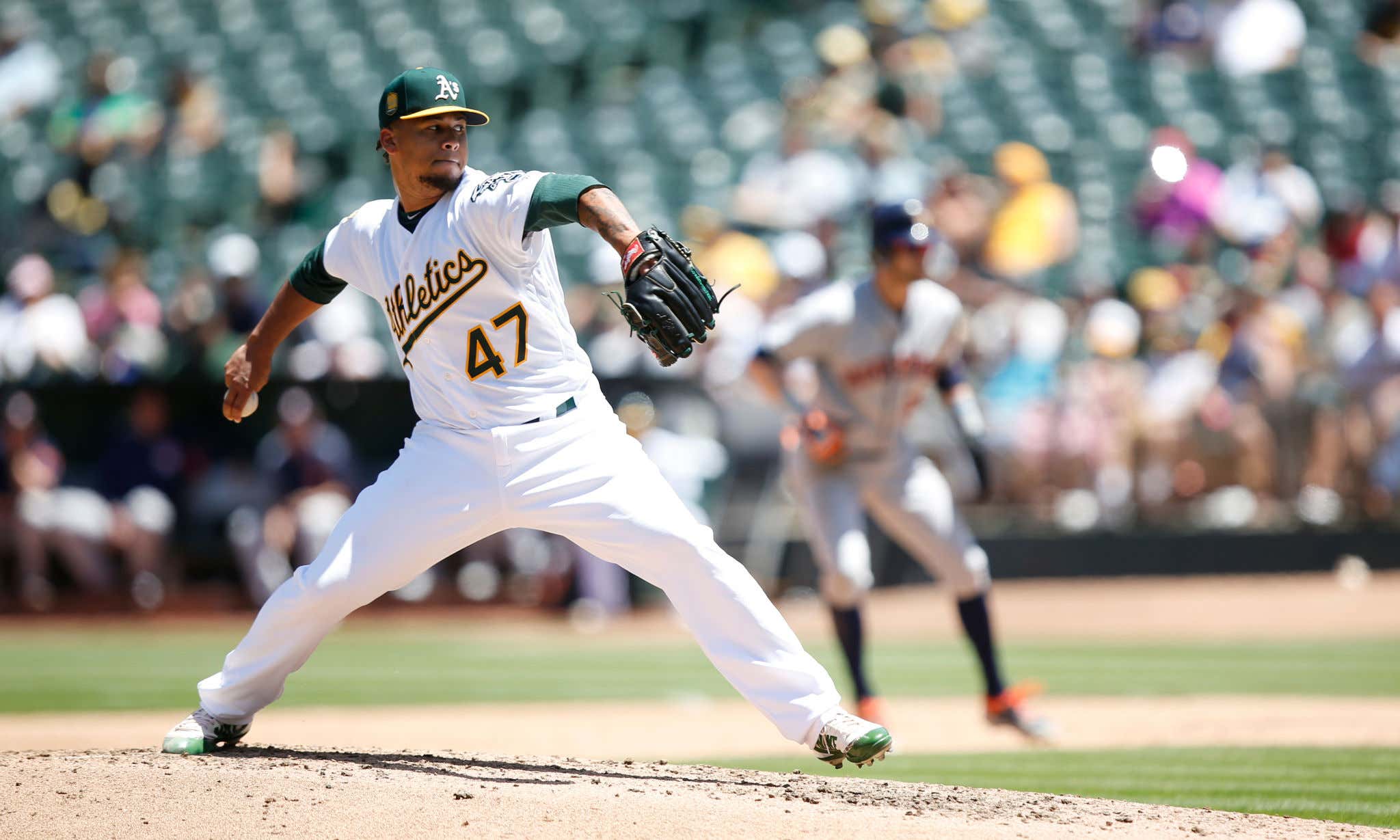 LETS GO!!! The Yankees had a few holes to fill at the trade deadline this year with none bigger than top of the line starting pitching. Last week they went out and got outfielder Andrew Benintendi. Earlier today they traded for Cubs side-arm reliever Scott Effross and just now they got their SP in Frankie Montas from the A's. Along with Montas they're getting reliever Lou Trivino to help bolster the pen. Let's dive into what we got here and what the haul was.

Luis Castillo was the Yankees number one target this deadline, but after Seattle went nuts with their haul, Cashman decided to look elsewhere. Usually I'm against prospect hugging when chasing a big fish like that, but you would have had to send both Volpe and Dominguez to top that offer. Not happening. Nope, Cash turned to Oakland and cooked up this deal for Frankie Montas. My immediate reaction? I'm more relieved than excited at first glance because getting this caliber of a pitcher was so important for the Yankees WS chances. You absolutely needed an arm like Montas behind Cole and they got it done.

The part of this trade I'm shocked about is that it didn't cost the Yankees their prized infield prospect Oswald Peraza. I thought for sure he was going to be in this deal, but instead it's headlined by the team's 5th ranked prospect and top pitcher Ken Waldichuk. Waldy is gonna be very good once he reaches the majors, but he can't help this team right now. Cashman had to be aggressive and get a legit no. 2 behind Cole and he did just that. Montas is a front line pitcher and someone you can comfortably slot behind Cole in October. After finishing in the top 10 of Cy Young voting last year the right hander followed that up with a very nice 2022, posting a 3.18 ERA over 19 starts. He's got a great splitter and good velocity on his fastball with good numbers all over the place. There are a few question marks that come along with him. For starters he just missed time dealing with shoulder inflammation although the Yankees are clearly comfortable it to go through with this. Montas has never thrown over 190 innings which could become a factor down the stretch here and into the playoffs. There's also a concerning home/road split (2.36 ERA vs. 5.01 ERA). Not a lot of his starts have come on the road, however, so that issue may just be an illusion.

There's also the little tidbit that Montas has a 6-3 record with an ERA of 2.77 and 52 strikeouts in 9 appearances versus the Astros since 2020. Had to wash down some of the bad with a stat like that to feel better.

So what was the haul? Well, it was nothing close to what Seattle gave up for Castillo. That being said, Castillo is a better pitcher than Montas so that makes sense. For what the Yankees surrendered here though, you gotta be on board if you're a fan of the Bronx Bombers. Not giving up Oswald Peraza is incredible here. Waldichuk leaves and that hurts, but to get a premier big league talent you gotta let go of some good chips. JP Sears had some nice success in the big league this year and will be a good add for Oakland. Cooper Bowman was the Yankees 21st ranked prospect in the organization. He's a second baseman that was in High A before the trade. Luis Medina was ranked 10th in the org and has all the tools to become a scary pitcher if he can harness in control. His fastball explodes out of his hand, but walks and missed spots have plagued him in his development. It's a solid haul for Oakland, but nothing I'm gonna lose sleep over.

I also see Yankees pitching coach Matt Blake toying around with Lou Trivino a bit and fixing some of his issues has was having over in Oakland. There's a belief with a better defense behind him, the BABIP bad luck he was having will turn around in his favor considering his high ground ball rate.

Unless Cashman has another surprise up his sleeve I would think that does it for the Yankees trade deadline in terms of splashes. They still need to unload Gallo and clear up a few 40 man roster spots, but overall getting Benintendi, Montas, Effross, and Trivino and only giving up one top 5 prospect is pretty fucking good for Cashman.

Now the question I have is do they call up Oswald Peraza? The Yankees no. 2 prospect is a fantastic fielder and has been raking in the past month +. Translation? He's an immediate upgrade to IKF. If you're not trading him I don't understand not bringing him up and giving him a real shot. Do it and give this team the best chance to win in October. I can't have routine ground balls not be made into outs because of IKF's shotty defense. Bring me Peraza and let's cook.