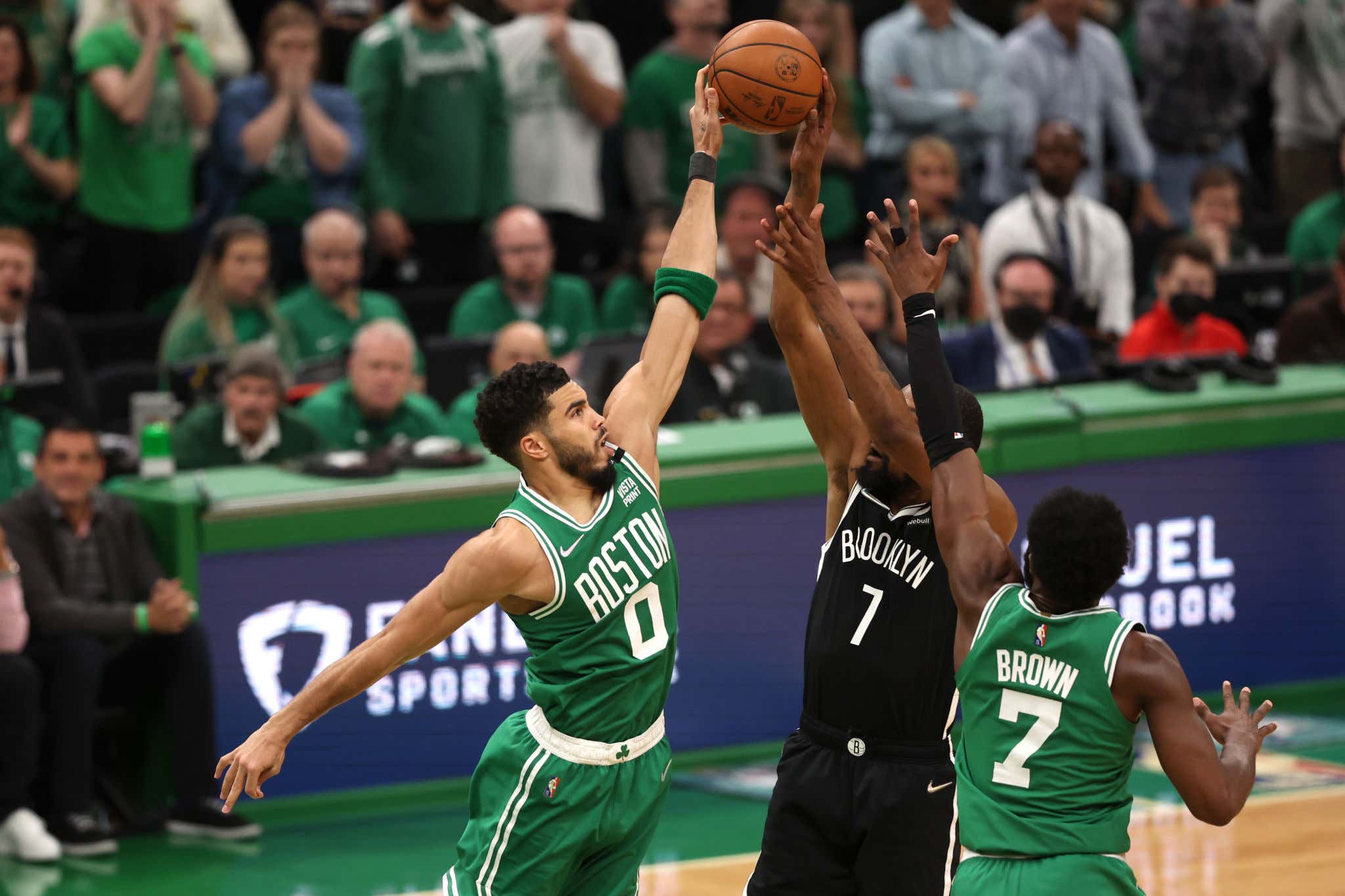 Ah yes, the Anonymous GM! Not to be confused with "Anonymous League Executive" that you often get whenever one of these morons wants to say something moronic and not put their name to it. OK Sean Marks, we get it. You're trying to increase the market value of Jaylen Brown and it's not working.

Let's get past that for a second. Let's say we live in a world where the Nets were also able to trade Ben Simmons. It's already a stupid enough idea to trade Jaylen Brown and pieces for a 34 year old Kevin Durnant. Do I really need to explain to you why it's even more moronic to trade JAYSON TATUM for KD? 24 year old Jayson Tatum? This guy?

I get it, Tatum probably ruined this GMs life by dominating the team he runs. Happens all the time. It would make sense why that person would want the Celts to get rid of a 24 year old who hasn't even entered his prime and is already an 1st team All NBA talent for an aging KD. That shortens the Celts window by about a billion years, so it makes sense. This guy clearly cannot beat Tatum and the Celtics, so he wants them broken up. Sad really, just be better. Compete. It's not mine or Brad's problem your team stinks.

What gets lost in all this KD drama and debate is the fact that nobody is arguing how fucking incredible KD is and still will be at basketball for the immediate future. He's an all time great. Someone should trade for him. I think when you say that you don't want to do a KD deal, people think you're saying KD stinks. It couldn't be further from the truth. Everyone knows KD is awesome. There's just no need for the Celtics to do EITHER of these deals. They are already contending as is. They are the Vegas favorites right now…as is. They addressed two of their needs with summer to a team that already made the Finals without gutting their team of important rotation players OR shortening their window. Where they are in their development, now is not the time to put all your eggs in the basket for an aging player who could very well decide he's not happy and just demand a trade next year. He did it with 4 years left on his deal and clearly that meant nothing so why should I think it will mean something now that he's out of Brooklyn?

Let's also point out something in regards to that quote. If this guy is trying to make it seem like Jaylen and Tatum aren't all that far apart, well then that makes it even CLEARER to me that Brad shouldn't do shit!

Seems like having multiple guys at this level and at this age would be something almost every team in the league would want? What a wild concept!

Sean Mark's goal of creating a certain narrative around the price of KD is clearly working. We're now talking  about guys like Tatum/Brown/Barnes etc, for KD. Is that his true market value? I dunno, if it was how come there hasn't been a trade yet? But those are the players being talked about on TV and on the internet in terms of a KD deal. That's why Marks leaked all that shit to Shams/Woj a few weeks ago. It's how you generate buzz just to help publicly set a market that probably doesn't exist. Now you have "Anonymous GMs" talking about trading probably the 2nd best under 25 player in the entire NBA for an aging Durant. That is so outrageous I almost feel like I'm being trolled.

If you need a quick reminder, there is not a trade combination that I would accept for Kevin Durant as long as Jaylen or Tatum are included. Let us not forget

No thanks. Good luck to whoever does, but I've waited a long time to get to this spot with this core and the Celts are right in the beginning stages of truly contending. I'll ride with what got me here thank you very much.