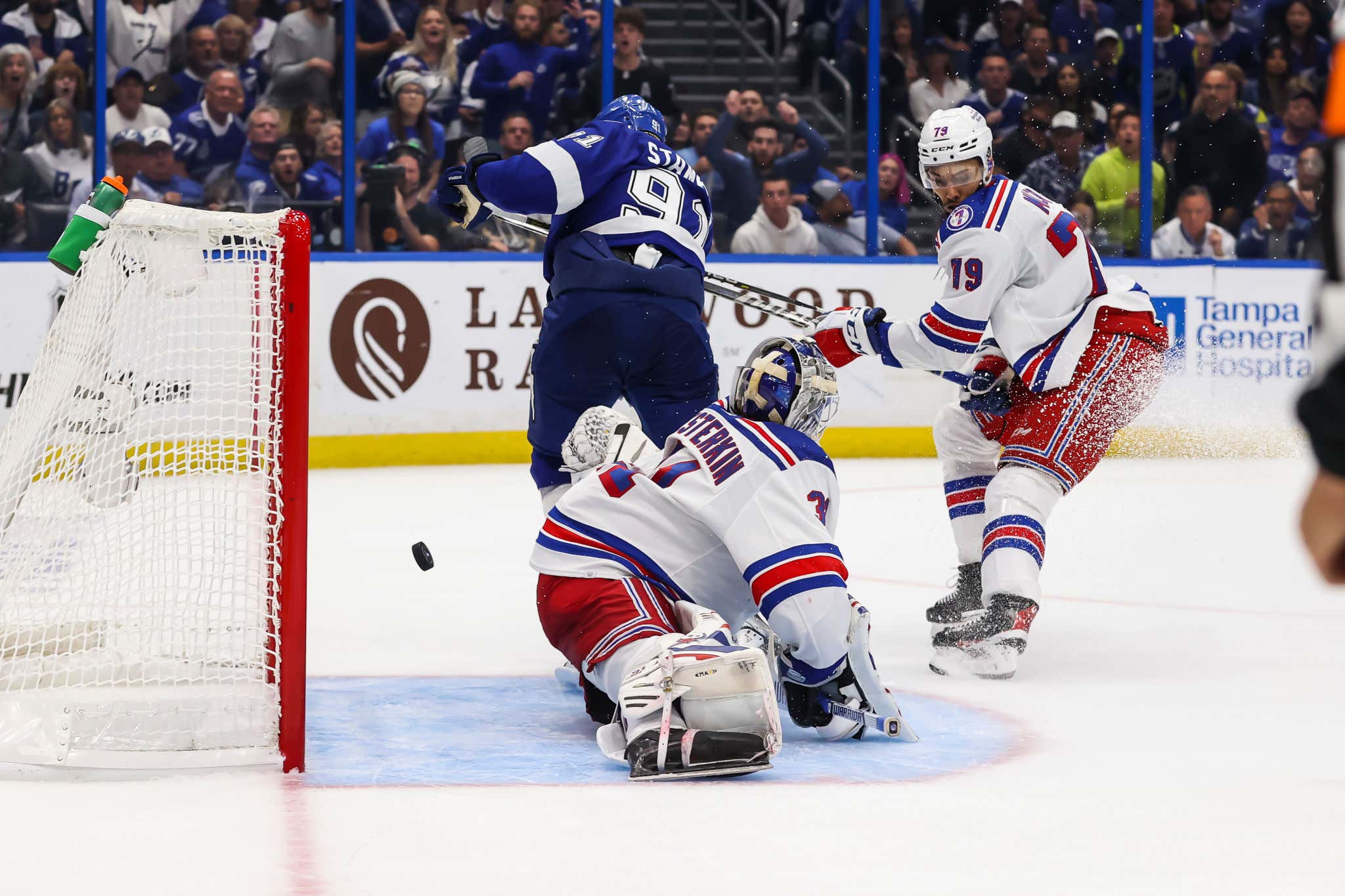 These Tampa Bay Lightning are unbelievable.

The Rangers tried everything. Hell, Gallant went all mad scientist jumbling the lines together and making a very questionable call to scratch Kaapo Kakko yet leave in a clearly hampered Ryan Strome who could barely make it through half the game. It did nothing to spark a group clearly feeling the effects of all the grinding, desperate hockey they've played. The Bolts just dominated throughout. Were a step quicker, a bit stronger and flat out better - not just tonight but a majority of the series. Igor Shesterkin was the only reason the Blueshirts had a shred of hope to send this to a Game 7.

Igor was incredible. Arguably his best performance all playoffs and that's saying something. The Lightning tripled up New York in high danger chances but the soon-to-be Vezina winner made highlight save after highlight save. He was finally beaten far post by Stamkos (surprise) and with the Rangers not able to generate a damn thing it felt like it was a wrap midway through the second. Down one in the third there was still no real reason to be positive other than "it's only one!" - especially after the Blueshirts were handed a powerplay TB shut down with a slew of shot blocks and impenetrable zone entry defense. But another opportunity knotted the game after Vatrano hammered home a faceoff win with under 7 minutes to go and all of a sudden it was anybody's contest.

Stamkos blew by Trouba to create a 2-on-1 with Kucherov, who feathered a pass Stammer fired into Shesterkin's glove he couldn't hang onto. In typical, grimy playoff fashion the puck flies forward only to bounce off Stamkos' pants and in. Some were clamoring for interference but it's a good goal. A dirty goal. A lucky goal. But a goal nonetheless that ended up being the one to send the Bolts to their third straight SCF. A goal elite teams usually find a way to score. A goal that eluded the Rangers too many times for them to take down the champs.

It's a tough pill to swallow, but big picture this season was a tremendous success. I'll get into that another time though. Right now, all I can say is that there's zero doubt the Blueshirts left whatever they had on the ice. Lindgren, Strome, Chytil, Panarin top the list of players battling injuries and there's always surprises that come after a team that's gone this far are finally eliminated. Fox & Miller were leaned on an insane amount and while they had awesome postseasons it's impossible to think they had much left in their tanks after playing the most hockey they've ever played. Even Shesterkin who still looked in peak form has gotta be drained from all the work he had to put in for his squad to make it this far.

No shame in getting outclassed by the best of the best in an Eastern Conference Final absolutely zero expected the Rangers to participate in before this season began. Especially after all the work it took to get there.

It was an unexpected but unbelievable ride. Simply ran out of gas and into the two-time defending Cup champs playing peak championship hockey - but these #NYR have a bright, bright future.

Sucks now but the payoff is coming. Sooner than we thought. pic.twitter.com/lrrmgdAhO6