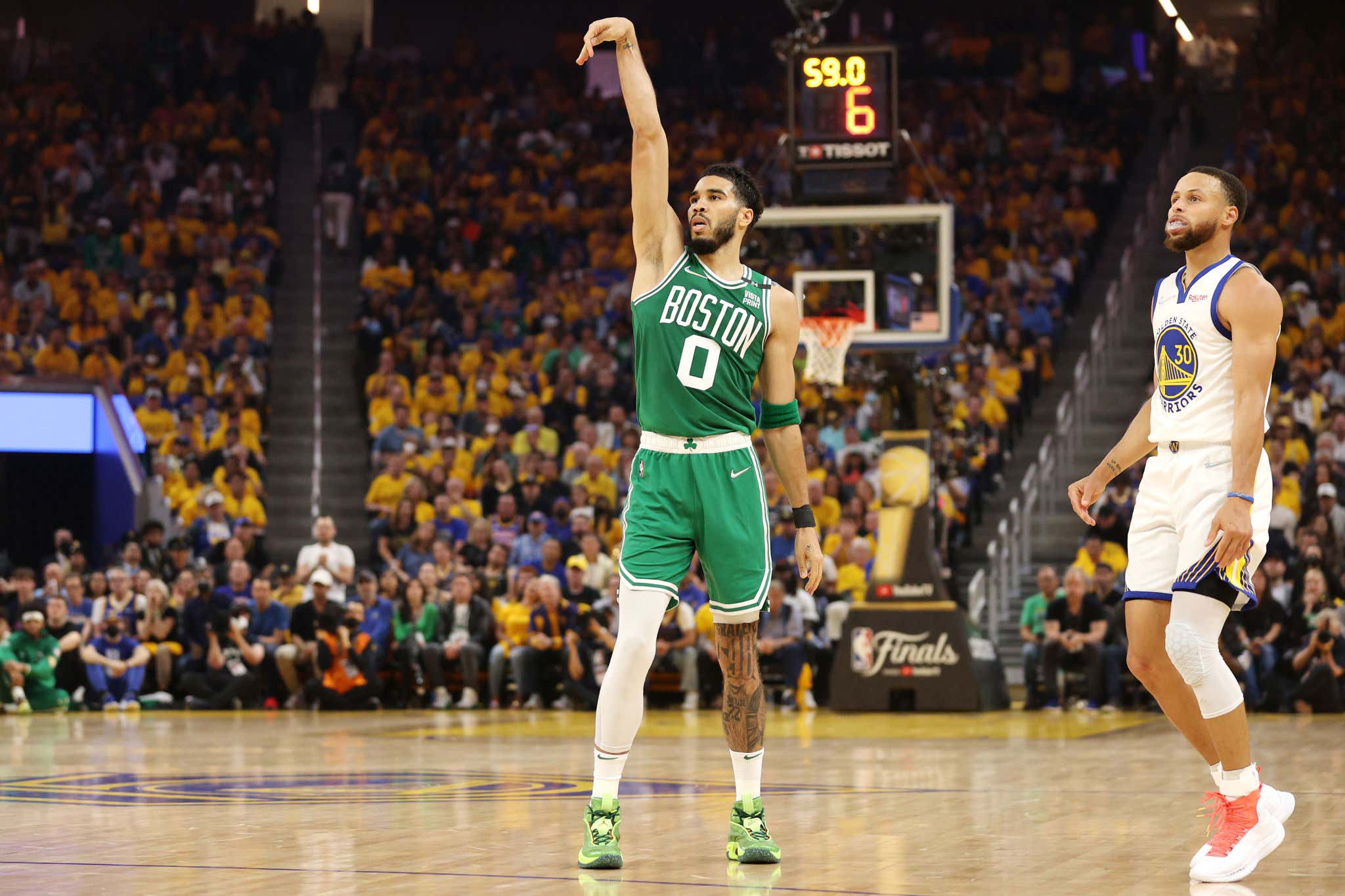 I'm not above admitting it...when Boston roared back in the fourth quarter in Game 1, I wasn't sure what to expect. I felt like it was crazy to say the Celtics wouldn't cover the next time out due to how great they've been away from home. People were ANGRY at me when I wrote Steph Curry was coming for Finals MVP off his 21-point opening quarter, only to see the Warriors lose to start the 2022 NBA Finals.

Then of course Golden State did what championship teams do in Game 2. They answered in a huge way, blowing out the C's 107-88. More focus on the defensive end, a huge post-halftime run that allowed Curry to sit the entire final 12 minutes, and overall, a thoroughly dominant performance in a must-win situation.

So what gives for Wednesday's Game 3? Time to break it all down and make some betting picks.

Boston has been brutal in the third quarter

Not to kick a team while they're down, but damn, the Celtics have gotten their asses handed to them in third quarters so far. I feel like head coach Ime Udoka has done an excellent job making adjustments, particularly for his first lead gig. It's

It just so happens that Udoka is up against a formidable counterpart in Steve Kerr who has multiple years of destroying folks following the midway intermission.

The first two games of the 2022 NBA Finals presented a fascinating subplot that I don't think has been fully discussed yet. To start things off, Jayson Tatum (OU 27.5 points) went 3-for-17 shooting, only for Boston to still claim victory 120-108 in San Francisco. Klay Thompson (OU 18.5 points) misfired on 15 of his 19 field goal attempts in Game 2 and hit only one of eight from 3-point range. Golden State still won by 19.

Here's the difference between those two and why it should concern the Celtics: Tatum found a way to have a massive impact despite an off shooting performance. He had 13 assists to two turnovers. The number of dimes was at seven north of his playoff average, and the lack of giveaways was uncharacteristic.

When Thompson isn't on a hot shooting streak, at least for now, he struggles to make a huge difference in other areas. that's not a knock on him. Dude is coming off a torn ACL and ruptured Achilles. Two full seasons away. We've seen Vintage Klay in flashes throughout the playoffs. There's a fairly obvious tweak the Warriors can make in their half-court sets to set Thompson up for success — or they could push the pace and have some spot-up transition treys.

The Celtics are nothing if not resilient

Following each of their past seven losses, Boston (-3.5/-150 ML) has not only won the next contest outright, but also covered the spread. You have to give them credit for how well they collectively respond to adversity. Nobody flinches. The problem is, a lot of these defeats have been on their own court. They lost twice at home to both the Bucks and Heat in the previous two rounds.

Even though the Celtics are favored, and have a strong track record of rebounding from setbacks in this year's playoffs, they also haven't faced an opponent with type of championship mettle and experience the Warriors have.

I swear I'm not writing this whole preview to deliberately counter Greenie's impassioned fandom, or to be a contrarian to all you Boston loyalists. I have a hard time figuring out where the Celtics have a clear advantage. Then again, that's precisely what has made the C's so dangerous throughout their sensational run to the Finals.

Scott Foster is the most visible, controversial referee crew chief in recent memory. He's overseen 14 consecutive playoff losses in games he's called with Chris Paul on the court. Celtics fans may be relieved to know that their team has gone 3-1 in the 2022 postseason with Foster on the call.

I had a front-row, in-person seat at NYC HQ this week when El Pres went on a tirade against Draymond Green allegedly murdering guys on the court on The Rundown. I mean, I can't say our fearless leader was terribly wrong in his assessment, Boston bias aside — and even though the most generous whistles on the Celtics' side would've done little to sway the final outcome.

By nature of tonight's showdown being at TD Garden, not to mention Foster's personal record officiating for Boston, I imagine there will be more calls going the Celtics' way. Again, I don't want to make too much of a referee, yet tonight's crew is going to have a huge influence on the course of the rest of these NBA Finals. Worth knowing Foster's latest history and the context of what transpired in Game 2.

Considering Boston has shot a mere 45% as a team at home during the playoffs, the hosts could use a few extra whistles and easy points at the free throw line. Foster is nicknamed "The Equalizer" by conspiracy-minded NBA fans who think he rigs outcomes to prolong series. So heck, maybe he'll go full heel be on the Warriors' side tonight. Who knows?

PS: In related Draymond news, here's a fun exclusive from Dave for Game 3:

Off to a rough start personally on Finals plays. Again, I was shaken by Game 1, not gonna lie. Felt a little embarrassed by the "CURRY FOR MVP" article, but then again, it was written in the moment, and the Warriors did have a double-digit lead at the end of the third quarter of the first matchup.

Anyway, going back to Golden State here. The Celtics have been too inconsistent, poor-shooting and overall shaky at home. They were playing with house money in a way on the road, and have a wealth of confidence to draw on based on how great they've been in that setting of late. Now all the pressure is on Boston to hold home court. I feel like, if anywhere, that's where their inexperience on this stage could start to come through.

Both teams ratcheted up the defensive intensity in Game 2. I expect that to continue and lead to another Under hit this evening. That's the type of slugfest the Celtics want to get into anyway against the more finesse Warriors.

Poole's assist prop may seem somewhat arbitrary and out of nowhere. However, he's had at least three dimes in 10 of his last 11 road games. There's more vig on the Under, so you might as well ride Poole's trend since he has a 4.3 assists average in the playoffs. I also expect the Warriors to make an adjustment and feed Klay more catch-and-shoot chances, which means more driving and dishing for Poole in all likelihood.