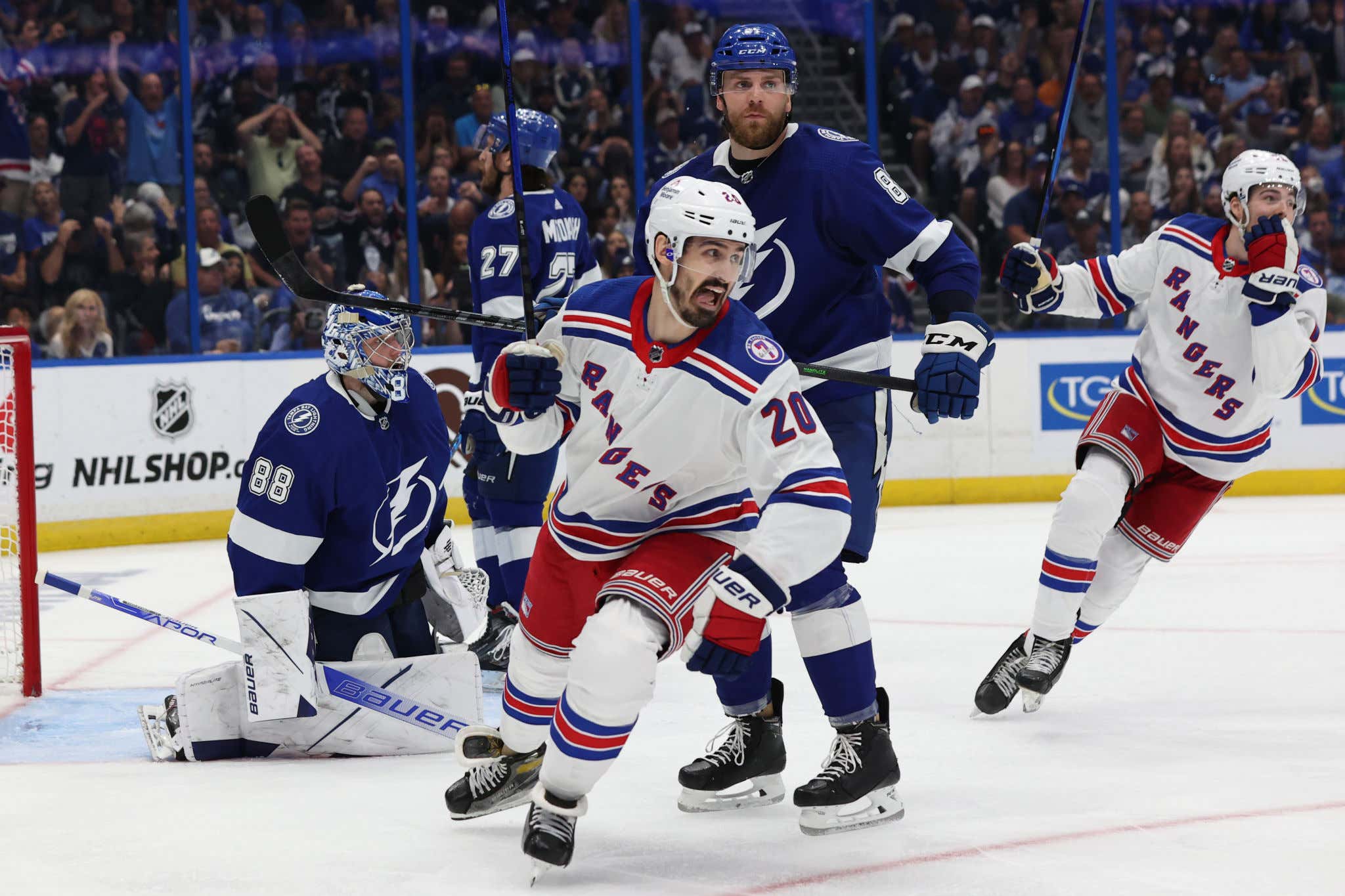 The start of Sunday's Eastern Conference Final Game 3 between the Rangers and Lightning in Tampa went as everyone suspected the series would go beforehand. Bolts netminder Andrei Vasilevskiy did everything but stand on his head, and his Blueshirts counterpart Igor Shesterkin had a brilliant first period and a half-ish of his own amid a scoreless deadlock.

Thanks to an Oscar-worthy acting job by Shesterkin after Corey Perry whacked him in the mask with his stick — reading that back, that sounds wrong but bear with me — so began a thrilling sequence that saw New York light the lamp twice on the power play before the Lightning responded with a goal of their own.

Anyway, Perry was in the wrong. Shesterkin did flop, but hey, it was a penal play. Mika Zibanejad had not one, but two cracks at a one-timer with the man advantage and made the Lightning pay the second time, set up ONCE AGAIN by Adam Fox:

Seemed like Tampa Bay didn't know what else to do at that point other than physically attack Shesterkin, because the two-time defending Stanley Cup champions were having no success scoring on him. Moments after this, Riley Nash crashed into Shesterkin to draw an interference penalty. Zibanejad wound up and fired from the left slot once again, and Chris Kreider was right on the doorstep to put the rebound in:

Kreider made some franchise history in the process, by the way.

At that point…was really looking like a 0-3 deficit staring the Lightning in the face, but we should all know better when Nikita Kucherov is involved. Jacob Trouba's trip to the sin bin wound up breaking the Bolts' scoreless spell, courtesy of Kucherov with a one-timer of his own:

Some electrifying, well-executed offense by both these clubs, capitalizing on critical mistakes. I'm a fan of elite goalie play as much as anyone, yet it was nice to get a reprieve from that to show that Vasilevskiy and Shesterkin are indeed human. Seriously though, Vasilevskiy is having a tough go of it against the Rangers, with 11 goals allowed now. His blocker side is a particular weakness, exploited by Zibanejad once again to begin the scoring.

Things are looking pretty good for the Blueshirts…I'll say no more for fear of a jinx.

UPDATE: Near the start of the third period Steven Stamkos SCORED on the … you guessed it … power play.