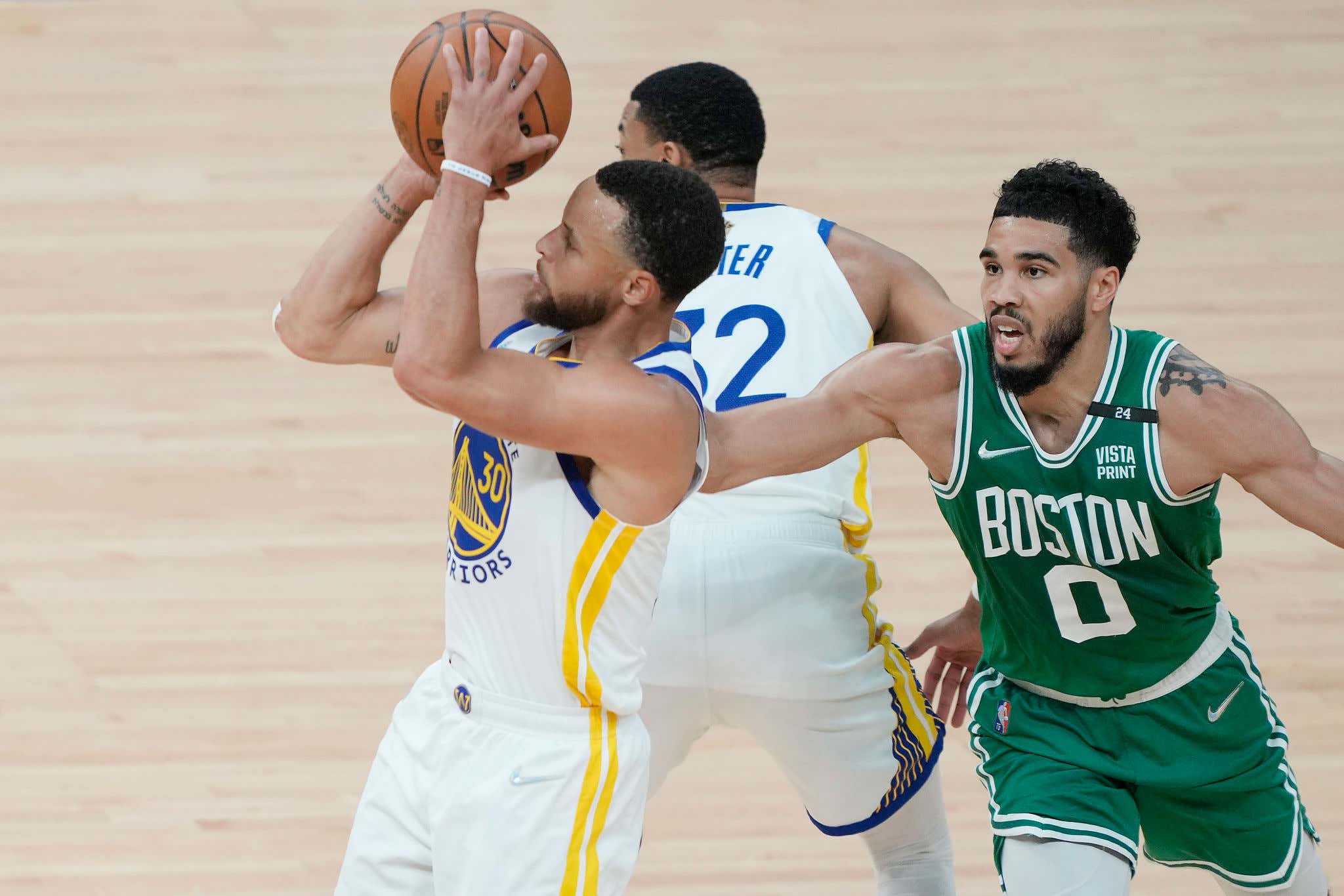 If the Boston Celtics proceed to win the 2022 NBA Finals, they'll have their historically great road record to thank, along with an unprecedented rally in their first matchup with the Golden State Warriors.

And when I say "unprecedented", that's what it was. Congrats to Celtics fans everywhere, or anyone who bet them live down the stretch.

I was one of the fools who believed the Dubs would win Game 1, and folks were ANGRY at me when I wrote a "Stephen Curry is coming for his first Finals MVP" once he'd hit six 3-pointers in the opening quarter. I mean, Curry did lead all scorers with 34, and the Warriors did have a double-digit lead entering the fourth. It's OK. I can take it. Props to Boston for that sick comeback.

Golden State is a 4.5-point favorite in Sunday's Game 2, which makes sense, because they can't leave the Bay Area down 0-2 if they want any hope of hoisting the Larry O'Brien Trophy.

Jayson Tatum post-Game 1 narrative is overblown, but worth riding

Anyone who doesn't hammer Jayson Tatum to score over 27.5 points and believes a second consecutive abysmal shooting performance is in store is a bolder forecaster than me.

There's this prevailing notion that Tatum couldn't have played worse in Game 1, and the assumption is, therefore, that if he plays to his capacity tonight, the Warriors have zero chance of winning. Well, yeah, Tatum sucked as a shooter in the Finals opener (3-for-17), but he averaged about 5.5 assists over the prior two rounds…and had 13 dimes on Thursday.

Think about that for a second. Let's be generous, round up and say Tatum accounted for seven more made baskets than usual. In essence, when you add in those seven extra field goals he was responsible for, that 3-for-17 becomes 10-for-24. Galaxy brain math, I know. Let's chill the fuck out about how awful Tatum was in his last start. He found a way to have a massive impact on the outcome, just not as a scorer this time.

Tatum's OU assist line is 5.5, with the Over juiced to -134. That's pretty steep, because I'm thinking he'll look to score early and often. A better play at this juncture is probably Tatum to win Finals MVP at +110, as he's now the favorite over Curry (+150).

Look, again, how much weight do you put into Boston's flurry of treys in the final quarter of Game 1? Before then, it was a highly competitive contest that Golden State looked poised to win. The Celtics punched them in the mouth, and ultimately, got a combined 15 3-pointers from Al Horford, Marcus Smart and Derrick White.

This postseason has been so fucking weird that I won't put it past that trio to do that again. Still, not holding my breath that it'll happen. I think to myself, "Is that more likely to occur once more, or is Draymond Green bricking 10 of 12 shots in a game?" I'm inclined to say Green won't be so bad going forward, because he, Curry and Klay Thompson are three-time NBA champions who know how to make adjustments in the Finals and succeed. Curry has faith this group in particular can respond.

As phenomenal as Boston has been on the road with an 8-2 SU mark in the postseason, it's not like the Warriors are a slouch at Chase Center. They'd won 11 straight in their own arena before Game 1's 120-108 loss. Their average point differential is in the double digits. The Celtics (+150) can take solace in the fact that underdogs have won six straight Warriors NBA Finals games. That trend feels destined to end soon.

C's need to clean the glass to stay competitive

A low-key issue for Boston of late has been its 70.7% defensive rebound success rate in the last eight playoff contests, which would've been bottom-five in the NBA during the regular season. The Warriors have logged a 78.4% rate in that category. Kevon Looney (OU 8.5 rebounds) pulled down six offensive boards in Game 1 for Golden State, which is pretty shocking in light of the depth and length the Celtics have in their frontcourt rotation.

When it comes to this key element of the action and what follows in the next subsection, Robert Williams' presence is huge. He's going to be questionable with that nagging, sore left knee every on every single Finals injury report. Multiple days of rest only work in Williams' favor. It's still worth keeping an eye on how he holds up the longer this series goes.

Golden State must attack the paint more often in Game 2

Again, not trying to take any credit away from the Celtics here. They played sound defense, and the referees swallowed their whistles for much of Game 1, which led to the Warriors managing only 26 points in the paint to Boston's 34. In the 2022 playoffs, though, Golden State averages 46.4 PITP to the Celtics' 38.5.

With how great Curry and Jordan Poole are at attacking the lane and craftily finishing around the rim, it'd behoove the hosts if they're more aggressive in that regard this evening, even knowing Robert Williams and Horford are excellent interior defenders.

Poole did have four free throw attempts on Thursday. Still, five of his seven field goals were from beyond the arc. The talented 23-year-old has been very streaky throughout the postseason. When Poole is on, the Dubs are tough to beat. Poole's Over 13.5 points isn't a bad flier to take. He ought to be more involved based on the expected tweaks Steve Kerr makes to Golden State's tactics.

The bigger-picture trends suggest the Under is due to hit, but based on how many 3-pointers were attempted in Game 1 (86), how much better I expect the Warriors to collectively be around Curry on Sunday and how Tatum should have a much better showing as a scorer, it's hard not to bet the Over.

All my instincts are telling me to go with Golden State. However, the -182 moneyline and spread are too much to take a plunge on. Boston's spread feels like the way to go, because even if the Warriors win, it should be really close. As for the second quarter, the Celtics have won it in their past seven as underdogs. I could see the Dubs starting hot and the C's responding before halftime.