Every now and then a headline comes across the timeline that makes even the most seasoned, hardened internet veteran stop scrolling and say: "....huh."  Where a seemingly random collection of nouns and verbs come together in a way that you've never seen before, mostly irrelevant parts combining to form a whole that is nothing short of a work of modern art.  The most recent example of this phenomenon came this weekend when, logging on just to quickly check some scores and news, I was confronted with the following amalgamation of words: 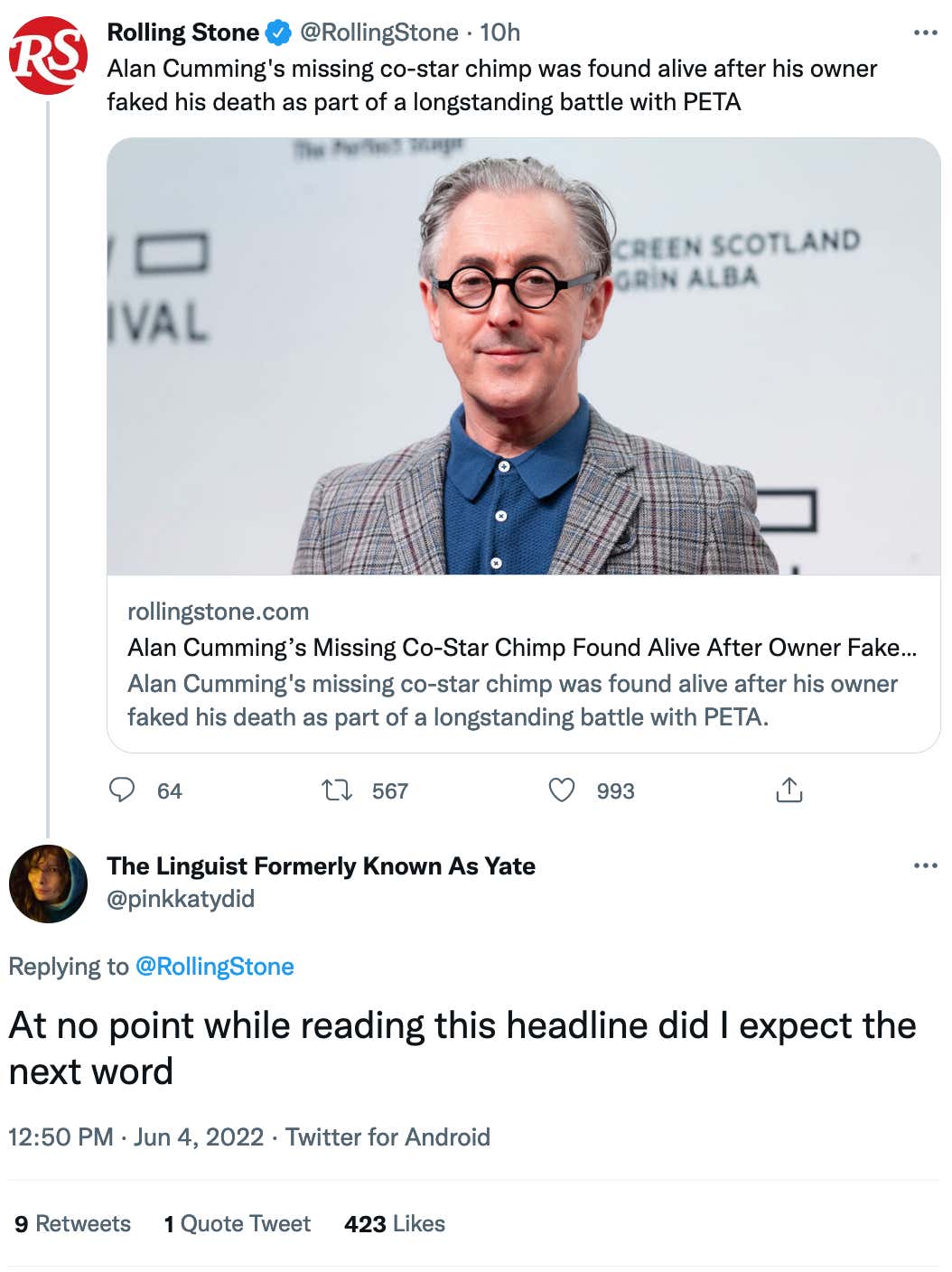 To state the obvious: I clicked.

The chimp had recently suffered a stroke and died from heart failure, his owner Tonia Haddix claimed, submitting a declaration and court documents to a Missouri judge that detailed how the animal’s body was burned in a fire pit.

But this week, Tonka was found alive, secretly hidden away for the past year in Haddix’s Sunrise Beach, Missouri home where he had a 60-inch TV, an interactive iPad-like touch device, and had celebrated St. Patrick’s Day among a few of Haddix’s close friends.

…authorities searched her home as part of an emergency court order obtained by PETA, whom she has been battling in a heated lawsuit since 2018. Faking Tonka’s death was a last-ditch effort by Haddix to keep her beloved chimp after a judge ordered her to turn over Tonka to the Center for Great Apes sanctuary in Wauchula, Florida.

Before we get to the central conflict, some immediate questions came to mind upon reading the intro:

A question I DON'T have is whether Tonia Haddix is guilty or not of lying about Tonka's death. Don't get me wrong, I have the utmost respect for the American legal system and its founding principle of presuming innocence.  It's just that I weighed the evidence and it was convincing:

With officials still on her property as of Friday, Haddix admits to Rolling Stone that she had lied about Tonka’s death, saying he’s been with her the whole time. “Oh absolutely, 100 percent,” she says. “In my house, yes.”

You're probably thinking, well, clearly Tonia Haddix did what she had to do out of love, for the good of Tonka.  But be careful about making the same assumption I did.  I mean I'm sure your initial reaction to seeing the acronym PETA was the same as mine, to assume they are the bad guy. It's understandable. That instinctual gut reaction is most likely the result of a lifetime spent having eyes and ears and being alive in the same world in which PETA exists.  The most counter-productive organization perhaps ever, who took up a cause that is supported by virtually everyone on Earth — treating animals well — and somehow, almost impossibly, earned the hatred of virtually everyone on Earth.

But that doesn't necessarily mean we are Team Tonia.  Not if there's even a little credibility to PETA's accusations:

The organization claims that when Tonka was found, he was being kept in a small cage nailed to the floor of Haddix’s basement. He was reportedly overweight, wasn’t allowed outside, and had no companionship with other chimpanzees — something crucial for chimps, according to the animals rights group.

Despite keeping Tonka hidden away for the past year, Haddix was finally busted by a recording of a phone call that PETA said it had received where the exotic animal breeder “confessed that [Tonka] was still alive but would be euthanized on June 2.”

…According to a 10-page transcript of the recorded phone call that PETA received that Rolling Stone has reviewed, Haddix was on the phone with someone who appeared to be from the documentary crew, discussing potential interviews with family members and updates about Tonka’s health condition, including seemingly confirming plans to euthanize Tonka.

Those claims aside, it's Tonia's own words straight from her own mouth that probably do the heaviest damage. I'm not a licensed psychologist but in my armchair opinion, when it comes to things like "mental stability" and "sanity,"  there are certainly some significant red flags raised here about whether Tonia Haddix has any, at all, of either:

These are the statements of a functionally insane person.  I'm not slandering or libeling anyone here, like I said I'm not a medical professional nor am I aware of anyone in this story's clinical history of sanity or lack thereof. I'm just saying these comments are objectively those of someone who is multiple sandwiches short of a picnic.

And, is now one kidnapped mistreated movie-star monkey short of having any friends. Because, while the courts and asylums sort all that out, Tonka will — fingers crossed — live out the rest of his days at a beautiful sanctuary, out in nature where apes are meant to be — or at least, where apes used to be meant to be, before they, apparently, according to Tonia, evolved to prefer being chained in isolation in a Missouri basement to provide companionship to some lunatic who thinks she is too good for 90-105 cats like every normal crazy old lady.

“After months of searching, Tonka has finally been found and help is on the way,” PETA’s attorney Jared Goodman said in a statement. “He has endured nearly a year of isolation and likely needs urgent care, but if all goes well, PETA will soon arrange for him to be moved to a lush sanctuary where he’ll have a chance for a real life at last.”

Okay, as I was saying. 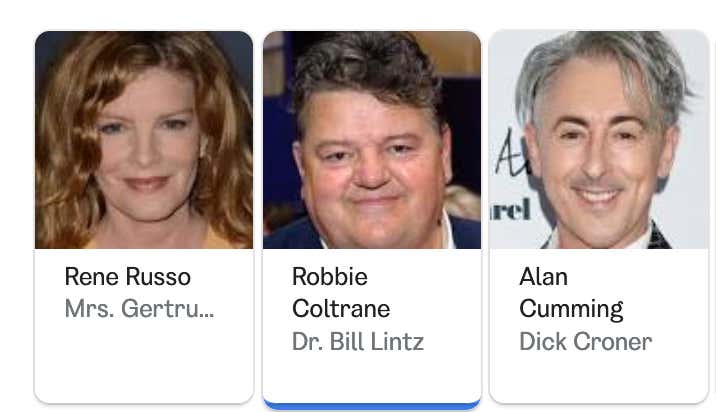 Another way of putting that is, in a movie centered around a romantic couple, the leading role of loving husband went to the guy best known as the fat magic mountainman at Hogwarts, and Cumming's sTaRrInG RoLe was to clean up the poop of the ape they adopted.

You know who never got mistaken for a fucking butler?

Literally, of the Jungle.