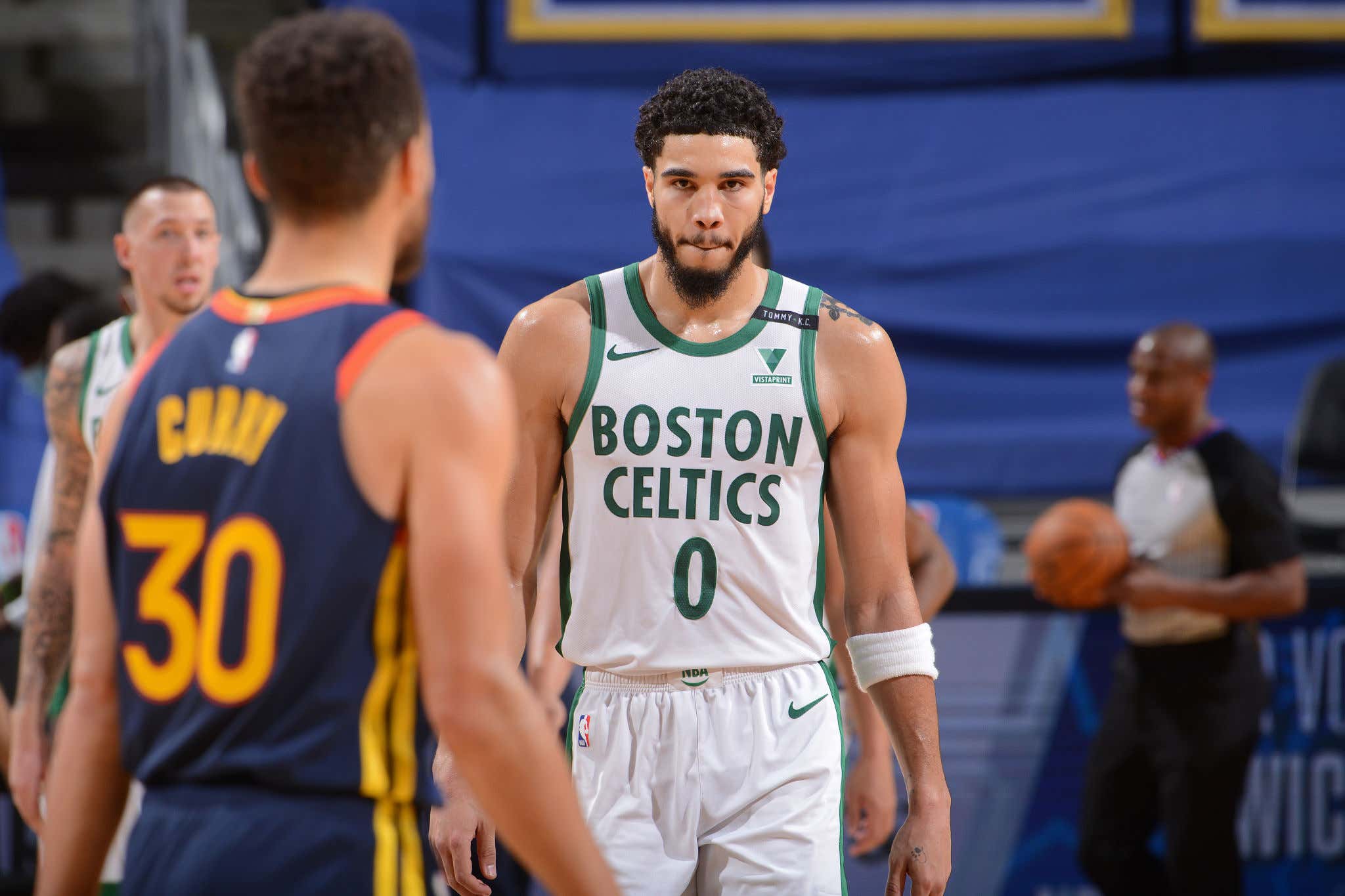 Sometimes when you're looking at betting trends, it's easy to get caught up in a big sample size and ill-advisedly use that as a proper gauge to judge how two teams match up. In the case of the Boston Celtics and Golden State Warriors, their stable organizational structures and solid continuity in recent years don't make that exercise a fool's errand.

If we stretch back to November 2017, when Celtics superstar Jayson Tatum was a rookie, Jaylen Brown was in Year 2, and Al Horford was in the midst of his first stint in Boston, there have been 10 meetings between the C's and Warriors. That marked the first season in which Kevin Durant was on Golden State, too, so the Dubs were even better than this newly invigorated iteration.

Funny aside: KD must be feeling weird that the Warriors made it back to the Finals without him, and his Brooklyn teammate, ex-Celtic Kyrie Irving, is also watching the NBA's grand finale from his couch. Or maybe he's levitating above the Earth's atmosphere in a spacesuit because, you know, the planet is flat according to him, etc...

Boston has gotten the best of the Warriors lately

I've not-so-smoothly transitioned away from the intro and have said all that expository information to set up the following key tidbits: Despite the fact that the Warriors are 3.5-point favorites in Thursday's Game 1, and are a -159 bet to win the 2022 NBA Finals at Barstool Sportsbook, recent head-to-head history is on the Celtics' side. Boston (+138 Game 1 ML) has gone 7-3 SU and 7-2-1 ATS against the Dubs in the last 10 matchups.

What has often gone right for the Celtics is their ability to keep the Warriors in relative check on defense. Both these squads have been exceptional on that end of the court this season. The Under (213 at -108) is 8-2 of late in Celtics-Dubs games.

Smart is Celtics' secret sauce — and can stop Chef Curry

It's no secret that from an intangibles/leadership/competitive fire standpoint, nobody brings the fucking heat quite like Marcus Smart does for Boston. Perhaps no one benefits from the longer rests between NBA Finals games than Smart. The Celtics get some rest coming into this series, but he's dealing with a mid-foot sprain and a sprained ankle. Smart had to gut through those injuries during the Eastern Conference Finals and has missed multiple contests this postseason. He'll is going to be fresher than he's been, which is a scary prospect for Golden State.

But what I'm getting at here transcends all that. The NBA Defensive Player of the Year an absolute key cog to stopping Stephen Curry (OU 27.5 points) and the Warriors' dynamic offense.

Curry is the Finals MVP favorite at -125 over Tatum (+180), yet is trailing -114 to +140 to be the Finals' lead scorer. Much of that is due to Smart anchoring Boston's perimeter defense. Beyond THAT, when Smart can pitch in as a proficient distributor and even a barely-average shooter, the Celtics' ceiling goes up by several levels. While you may not want to count on Smart's scoring, he's due to hit his Over assists prop (5.5 at -134). It's heavily juice for a reason, as Smart has hit the Under in his last four starts.

A hot scoring streak by Smart is perpetually unexpected, so when it happens, Boston gets an injection of life that's impossible for any single other player to replicate. There's almost a collective holding of the breath every time Smart raises up to hoist a shot. Based on how brutal he is as a shooter, just about any Smart field goal attempt feels reckless. When he's getting buckets with any consistency whatsoever, Boston is almost impossible to beat.

Draymond Green is the elite-defending counter to Smart and the Celtics' size advantage in the paint. Green can guard any position on the floor. Whether it's switching onto Tatum or Brown, or bodying the likes of Horford, Robert Williams and Grant Williams inside, Green can get the job done as a free-roaming Swiss Army knife to take some interior burden off Kevon Looney. In fact, Curry and Green have both played exceptional defense throughout the postseason.

There isn't a much better subplot in pro basketball than Klay Thompson's comeback. Two full missed seasons due to major injuries later, he more or less looks like Vintage Klay in flashes. Even with the understanding that he's knocking some rust off, Thompson has had two lethal close-out performances in a row, scoring 30 in Game 6's KO of the Grizzlies and 32 to finish off the Mavs after being rather quiet throughout the Conference Finals before then.

Given how hot Klay can get from beyond the arc, and how much attention Curry will be attracting with his indefatigable off-ball movement and sick handles, I could see a lot of clean looks for the other Splash Brother tonight. That said, 20.5 points seems like a high mark for Thompson to eclipse.

Something must give as Golden State hosts road warriors

If you want to be the contrarian/maximum-value bettor and take a shot on Boston tonight, or to ultimately seize the Larry O'Brien Trophy, that's commendable and at least within the realm of possibility. One reason for that is how well the Celtics have consistently played away from home this season, putting up a +7.4 point differential outside of TD Garden. They just won three times in Miami, including a Game 7 to get here, and hold a 33-16-1 ATS road record.

With all the chips down now, though, I'd be worried if I were a Boston fan about the inability to protect home court. Those road victories were made easier by how in-shambles the Nets were, the fact that Milwaukee was without Khris Middleton and the injury to Heat Sixth Man of the Year Tyler Herro.

By the same token, Golden State dodged a true challenge in Round 1 as Denver's Nikola Jokic didn't have a healthy Jamal Murray or Michael Porter Jr. competing alongside him. The Dubs got to face Memphis three times without Ja Morant, and benefited from a Suns choke job/potential lingering injuries to Chris Paul and Devin Booker to face the Luka Doncic-and-few-other-viable-players Mavs in the last round.

Bottom line: Both teams are dealing with the best opponents they've faced. That's less of a "DUH! IT'S THE NBA FINALS!" statement than you'd typically encounter most years. Injuries have played a huge part in these NBA playoffs, and to their credit, the Celtics and Warriors stayed healthy enough and played the highest-quality basketball to get to this point.

I'll say this: If you don't bet the Warriors in Game 1, realize you're going against a team who's won 11 straight at Chase Center, has a +10.7 point differential at home and has a tradition of historic excellence built by its foundational core trio.

So last round, I had the Heat moneyline at +200 in Game 3, and picked the spread and Over/Under for all the rest of the Conference Finals. Came one point away from hitting the Over for Celtics-Heat Game 7 to go 10-2 vs. the total points line, and wound up 8-3 ATS plus the +200 Miami win. Player props have been much more of a 50-50 situation for me. Data just seems to lie, and the frequent blowouts of these NBA playoffs make those even trickier. So for purposes of this exercise, you can deduce what I've written in the sections above as prop play endorsements, and I'll stick to the main betting lines here at least for Game 1.

Anyway, I'm going to ride the predominant Under trend that's gone on between these squads when they've met, but still take Golden State to win a rather close one. A low-scoring battle seemingly favors Boston, whose road brilliance is nothing to scoff at. This is the NBA Finals, though. The Dubs' experience and electrifying home-court advantage should be enough to pull off a two-possession victory.