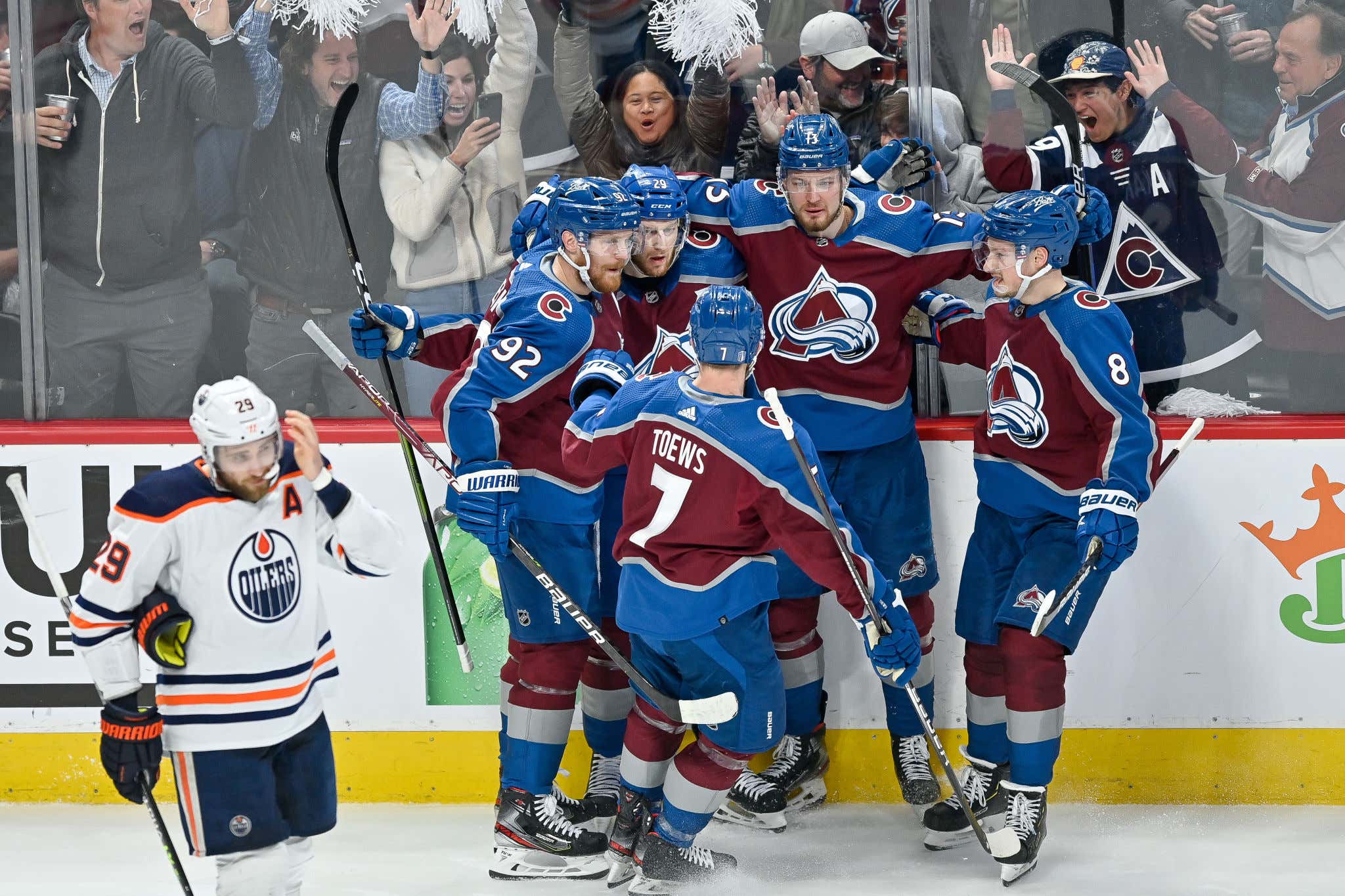 The Edmonton Oilers and Colorado Avalanche are two of the NHL's most electrifying clubs. For clear proof of this, look no further than Tuesday's Game 1 of the Western Conference Final, when they combined for five goals in the first period alone, and wound up with an 8-6 final score in Colorado's favor.

Not sure where to even begin discussing this one. Chief did a fine job recapping the action-packed opening period in which Nathan MacKinnon scored a sick goal, but perhaps the biggest sequence of the night came just before that intermission. Edmonton's Zach Hyman scored in his sixth consecutive outing for Edmonton to knot the score at two with only 23 seconds left in the first period, but a mere nine seconds later, Avs star defenseman Cale Makar pounced on the puck in the neutral zone as the Oilers got lazy before the final whistle. He streaked into Edmonton's zone and zinged a shot past goalie Mike Smith to give the Avs a 3-2 lead.

Valeri Nichushkin had CLEARLY not gotten past the blue line in Edmonton's end, yet even after the officiating crew reviewed Makar's goal, it was confirmed to be good. The reason? Nichushkin didn't play the puck, and Makar didn't touch it until Nichushkin had cleared the zone. Look how close this shit was. You can't underestimate how much momentum this generated for the hosts.

Makar's second absolute bazooka of a shot, however, was a no-doubter and chased Smith out of the crease after it was deflected in by J.T. Compher for the Avs' sixth goal of the evening:

It wasn't long before Avs starting netminder Darcy Kuemper got subbed out for as well. Unfortunately, it was an upper body injury that took Kuemper off the ice, and the hope is he's healthy going forward. You want to see both these phenomenal teams as close to full strength as possible at this late juncture of the Stanley Cup playoffs.

Anyway, back to all the goal-scoring and what not: Compher's aforementioned goal marked his second of Game 1. It was one of three unanswered Colorado scored in the second before Connor McDavid finally answered for the visitors:

McDavid was instrumental in pulling the Oilers within just one goal in the third period. He and Leon Draisaitl set up Ryan Nugent-Hopkins for a one-timer to cut their deficit to 7-6 on one of the most beautifully executed power plays you'll ever see:

Edmonton sent on an extra attacker, but their bid for an equalizer was denied after the Avs got gutsy, blocked a couple key shots in front of second-string goalie Pavel Francouz, and then Gabriel Landeskog tacked on an empty-netter to make the final score a little more lopsided. I mean hey, why not pile on another damn goal just for good measure?

This was seriously an all-timer of a Game 1 to the 2022 Western Conference Final. SHEESH. Turns out, this is exactly what Tuesday's road team is accustomed to historically. I guess that'll happen you have icons like Wayne Gretzky, Mark Messier and others rolling through your franchise and winning Cups and shit.

The Oilers have to feel pretty good about themselves. They lost in similar fashion to begin their last series, a 9-6 defeat in Calgary, and proceeded to win the next four to advance to this stage for the first time in the McDavid-Draisaitl era. That experience clearly emboldened Edmonton not to back down in the Mile High City when that offside non-call didn't go their way, not to mention once the Avs had stretched their lead as far as 7-3.

Playoff hockey is fucking sick this year. If you're not tuned in, you're missing out. INJECT OILERS-AVS GAME 2 INTO MY VEIIIIINS!!!