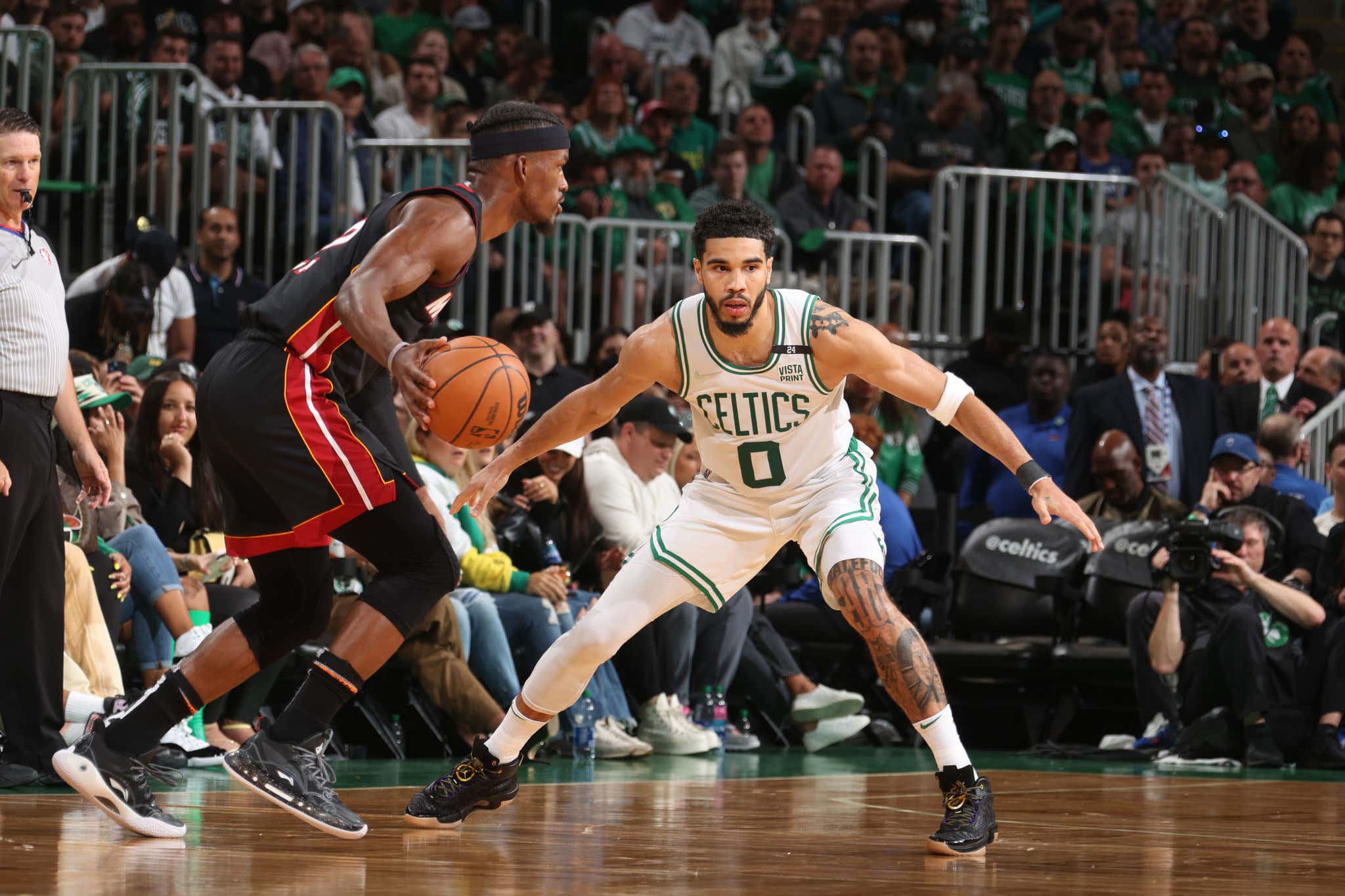 It could happen tonight! We may have our 2022 NBA Finals matchup! The Boston Celtics are on the precipice of eliminating the Miami Heat in the Eastern Conference Finals and are massive, 8.5-point favorites to do just that.

Should Boston fans be worried? Will El Prez and Greenie be utterly enraged to begin the long weekend? Well, the Heat are nothing if not a tough group, but the Celtics have the grit and a clear edge in star power. It's time to break down Game 6 through a betting lens. Hope you're ready.

It's doubtful Miami's offense can possibly get any worse

Jimmy Butler has regressed from Jimmy Buckets to Jimmy Bricks. Much of that seems due to a nagging sore knee he can't seem to get right. Hard to thrive on the hardwood if you have a bad wheel. From a purely objective standpoint, it sucks that we're no longer seeing the 2020 bubble Butler who willed the Heat to the NBA Finals and dominated at times during this postseason, too.

The face of the franchise and of "Heat Culture" isn't going to admit to any sort of physical vulnerability. You can credit the Celtics' tenacious defense all you want. They do deserve their praise. That said, Butler is clearly not himself. It's painfully obvious in the most basic stats and his lack of scoring production.

Miami's horrendous offense over the last two contests goes beyond Butler, though. In Game 5's humiliating 93-80 home loss, the Heat's starting backcourt of Kyle Lowry and Max Strus combined to misfire on all 15 of their field goal attempts. Lowry has a hamstring injury that's plagued him throughout the playoffs. So while Butler is the catalyst, everyone needs to play better for Miami to stay alive.

Pretty straightforward here. The past four times the Celtics have led a series 3-2, they've lost Game 6. I like to cite the Law of Averages on occasion. If you operate under the reasonable assumption that Miami gets anywhere near average proficiency on offense simply due to the fact that they do have actual professional basketball players on their roster, that +320 Heat moneyline suddenly looks quite enticing.

Derrick White, who contributed 14 key points in the last low-scoring slugfest, is at least publicly projecting the right mentality.

Across this series, the Celtics are averaging 29.2 free throw attempts a night compared to only 19.6 for Miami. Boston has benefitted from exceptional defense, particularly on the interior from five-time All-Star Al Horford, elite rim protector Robert Williams, and even Grant Williams. Really, everyone on the C's has stepped up on that end of the court all season long.

To be able to beat the Heat 102-82 in Game 4 without Defensive Player of the Year Marcus Smart is a testament to the hard-nosed identity head coach Ime Udoka has helped cultivate. A slow start to the season didn't stop Boston from buying in. It's really paying dividends now. Defending this well without fouling nearly as much as their opponent gives the Celtics a distinct advantage — especially when you factor in how whistles are liable to go in their favor at TD Garden.

The last time these teams played in Boston, the Heat only shot 14 free throws to the Celtics' 38.

Can Jayson Tatum take over?

If Jayson Tatum (OU 39.5 pts, reb, ast) wants to establish himself as a legitimately elite player, this is his chance to be the aggressor, make like Jimmy Butler, grab this Game 6 bull by the horns and DOMINATE.

For all the deserved acclaim Tatum has drawn at times for leading Boston to this point, he's low-key had a shaky past couple of series. Outside of a sensational 46-point performance in his last Game 6 in a win over the Bucks, he struggled against Milwaukee, with a shooting percentage of 42.1% across seven starts to average 27.6 points.

Tatum has seen his scoring average fall to 23.8 vs. Miami, with a 43.1% clip from the field and a 28.5% split from 3-point range on 7.4 attempts from deep per contest. He's averaging 5.8 assists, but also 4.8 turnovers. Some of that is due to sheer playoff intensity and how much responsibility Tatum is taking on defensively.

Still, Friday marks a pivotal, potential turning point in Tatum's career and in the Celtics' celebrated franchise history. If he can submit a signature performance, we may see Tatum springboard into an eventual NBA Finals MVP, where he's listed as the No. 2 favorite (+200) behind only Warriors legend Stephen Curry (+110).

Props have been so brutal to me lately that I'm self-fading and riding Jimmy Buckets. I don't think he'll ever have a lower scoring prop Over/Under than he does tonight. It's a do-or-die scenario. This man is going to give every last ounce of energy he has. I'm almost convinced Butler is playing some sort of long con and will resurface to stick it to the C's in front of their own fans. Only half-kidding about that. Robert Williams has scored 9+ points in 12 of his last 13 at home, so I'm riding his Over as well.

As for the spread and total points line, I'm on a good run with those. Hit the Warriors -7 on Thursday, missed my first OU of the Conference Finals. Because bookmakers are making this Heat-Celts line so low, I have to take a flier on the Over. My gut tells me Miami coach Erik Spoelstra has a couple more schematic tricks up his sleeve to at least make this one close in the face of elimination. Bear in mind, Spo has never lost a Conference Finals series.