I'm not sure if you guys are paying attention to this but Trevor Story just put up the most powerful week of the season with a .760 ISO. We talked a little last week about that but it's essentially a measure of how often you hit for extra bases. MLB average is .114. MLB career record is like .350. The equivalent would be a guy hitting .800 for a week. Like to me that's just as impressive as a .760 ISO and I don't care who tells me that's stupid. Shoutout Trevor Story for putting the Red Sox on his back. 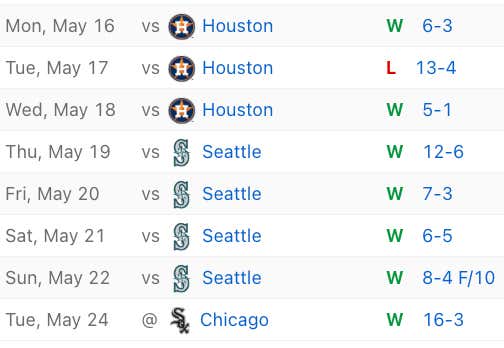 And again, I know I was wrong to say the Red Sox were dead. I already admitted that.

So don't come shitting down my throat now that they're hot. As I transition into the national baseball scene, it would be swell if you gave me some space to calibrate. Not everything is a finished product.

On that front, we got a big show coming out tomorrow morning with Kevin Guasman. I am absolutely jumping out of my shorts right now for the interview to drop because it's honestly and simply that good. Two guys that know how dominate the shit out of the pitching rubber just going back and forth and then obviously nice to have Jake sit in on it too.

We have another 24 hours before it goes out. To get ready I highly recommend jumping into Tuesday morning's show. We're doing shorter episodes early in the week to kinda get you guys up and running from the weekend. And then we're coming back Thursdays with longer and deeper conversations with baseball guys. Miles Teller. Joe West. And now Kevin Gausman. The guest list is shaping up nicely and I know the next couple weeks will match that.

So go check out Tuesday's show to keep the momentum going. Some highlights:

- Weekly Awards to talk about the hottest guys in baseball

- Jake's son is getting recruited to national travel teams. He's 10.

- WE GOT MERCHANDISE COMING

Check out the show and we''ll keep getting it better. That's a fair trade off.

Shane Victorino wins bald guy of the week. I meant to say this earlier but we're already deep here guys so just work with me. We give Shane the award because he's a sweet dude who is super bald and he also commented on our IG posts last week. So it was just a real solid opportunity to recognize a bald guy in the community and give him so love. So we did just that, and then he turns around and invites us to Hawaii to hang out and play golf. On behalf of you guys, I said yes. I know the flight is long and I am not too comfortable in perfect weather on perfect beaches. But I'll suck it up and do my best to make decent content golfing with Shane Victorino in Hawaii. Somebody has to do it and it might as well be me.

The merch drop is going to be interesting. I might be the first blogger at Barstool to serve as an official intermediary between MLB players and our merch team. I'm happy to be that guy. Don't miss the Kevin Gausman episode. I'll just say that.