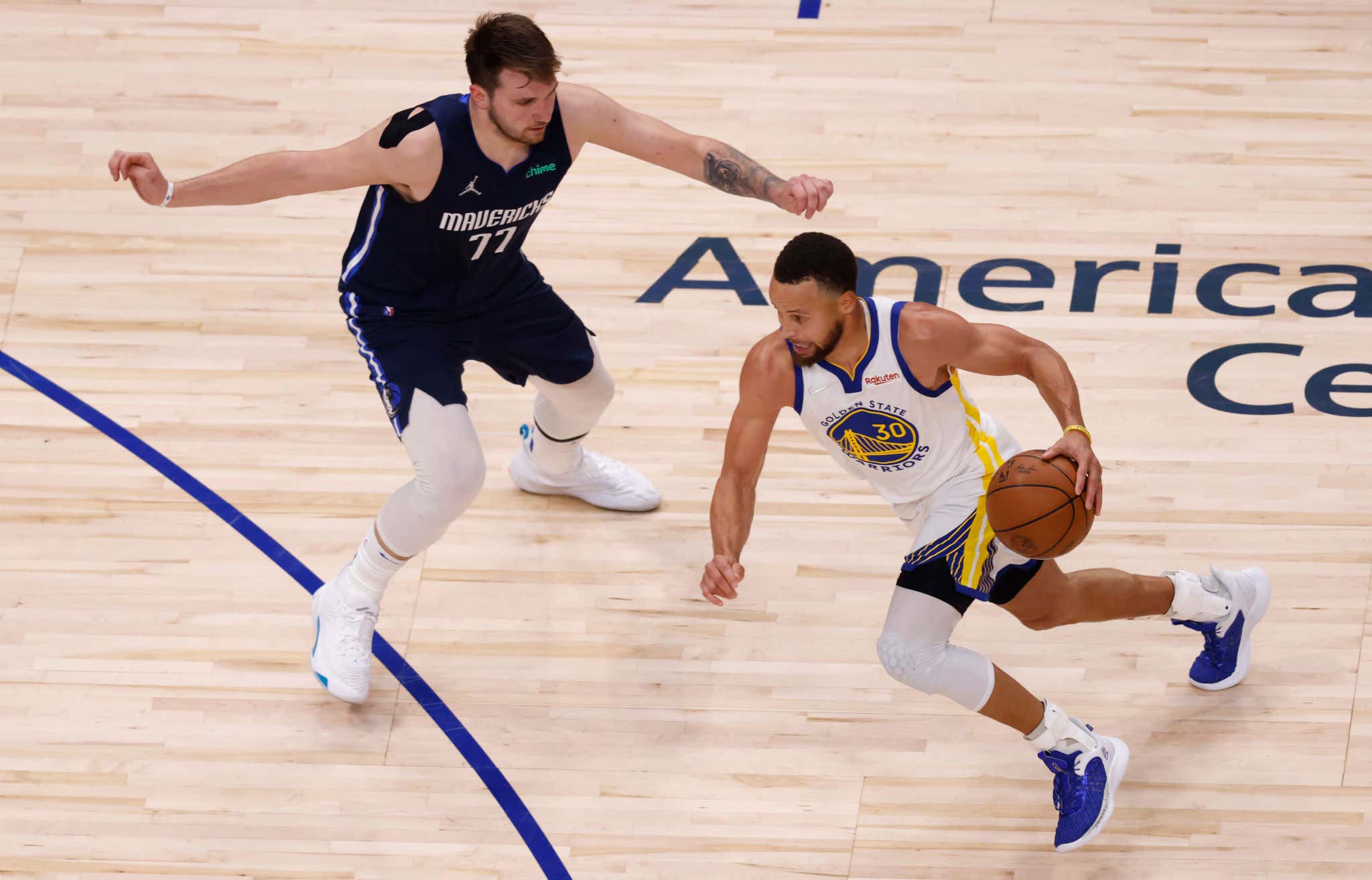 On my own volition last night I was wearing out the NBA trade simulations trying to figure out how the hell to help out Luka Doncic. No simple solutions there. The Dallas Mavericks superstar clearly needs more support around him to knock off a complete, championship-caliber team like the Golden State Warriors. That's painfully obvious in the midst of these Western Conference Finals as the Dubs hold a commanding 3-0 lead.

Pride is about all that's preventing Luka and the Mavs (-1) from laying down tonight and succumbing to elimination. If the last matchup wasn't enough of a desperate situation to get a win, maybe it's just not in the cards for Dallas.

Anyway, on to Tuesday's betting preview. I may or may not be quietly rooting for a sweep, if only so that we can get one step closer to the NBA Finals and the Mavs can further justify changes to this roster in the summer.

Since coming out flat in Game 1, Luka Doncic (OU 51.5 pts, reb, ast) has been phenomenal, with back-to-back 40-point scoring efforts. Unfortunately, Dallas lost both those contests by nine points. Because of all the energy Luka is expending to pick up the offensive slack where his teammates have been lacking, his already-pedestrian defense has predictably suffered. The Warriors made 11 of 15 shots in Luka's vicinity in Game 3. Not great. However, Luka's defensive struggles are a little bit sensationalized in the mass media.

Luka and Spencer Dinwiddie did combine for 25 free throw attempts the last time out, and Jalen Brunson has shown out, yet it might be too little, too late, as Golden State's well-established, 12 ppg edge in points in the paint is still a trend that's defined these Conference Finals. Not like the Mavs guards were frequently sprinting out in the open court to get to the rim, either. Those opportunities predominantly came through languid, unimaginative half-court sets.

In five of their six halves of this series, the Mavs haven't been able to hit the ocean from the beach as far a 3-point shooting is concerned. They're so reliant on trey bombs and don't seem willing to adjust that strategy enough to make the Western Conference Finals competitive. Dallas has drained just 32.6% of 3-pointers against the Warriors, while Golden State is hitting at a 39.3% clip.

The former No. 1 overall pick put Luka on a poster with one of the best dunks I've ever seen in Game 3. Andrew Wiggins (OU 16.5 points) is really asserting himself as a worthy NBA champion. Marooned for the start of his career on a floundering Timberwolves franchise, he's found a home in the Bay Area that really suits him. I know plus-minus is a team stat but look at this:

Raise your hand if you called Andrew Wiggins being the leading plus-minus guy in the 2022 NBA playoffs this late in the proceedings. Yeah no one could've seen this coming. Wiggins has tapped into more of a killer instinct and aggressive mentality, unleashing the fuller potential he only showed flashes of in Minnesota.

With all those good things said about Wiggins — and even with Otto Porter Jr. out injured to create even more minutes for him on the wing —  I'm not sure I trust him to continue on this trajectory. The far larger sample size of Wiggins' career suggests he'll go into another lull soon enough. That could create an opportunity for Jordan Poole in Game 4 after he attempted only four shots in Sunday's 109-100 win.

Would it kill Dallas to pick up the pace?!

The exclamation point is warranted. All series long, the pace has actually favored the way the Mavs like to operate, which is to say slow as fuck. I don't know if Jason Kidd is asleep on the sidelines or if he's following what's happening on the court. Either way, there have been so many times where Dallas players have had wide-open looks early in the shot clock and pass up those attempts. What happens from there is either a clear-out for Luka, or a ton of extra, frivolous passes that lead to a more contested, often missed shot.

I really do not understand. Luka is an absolute tank when driving to the rim. Dinwiddie can drive effectively. So can Brunson. Dorian Finney-Smith and Reggie Bullock are excellent, springy athletes who should be cutting to the paint more often to get close-range looks instead of pitching tents on the 3-point arc.

MORE OF THIS PLEASE, for sheer entertainment's sake!!

Little to no effort is put into pushing the pace for transition offense before the Warriors' defense is set. Some credit goes to Golden State for getting back. Nevertheless, these Warriors are a much older team for the most part. Why not take the fight to them? Bang around Stephen Curry and Klay Thompson on your way to the rim. Don't back down from Kevon Looney. Stick Draymond Green's foot in his mouth for once. The Mavs are getting absolutely steamrolled and seemingly no one outside of Luka wants to do anything about it. That or the coaching staff is shellshocked and incapable of making noticeable adjustments.

Push the tempo. Get more quality, close-range looks by catching the Warriors off guard. Seriously. It's brutal to watch this Dallas offense mindlessly squander the majority of their possessions waiting for seconds to tick off the clock. Nothing to really lose at this point down 0-3. Have some fucking heart.

Golden State (-103) has a huge rebounding edge, with 47 per game over the last three to Dallas' 32.7 average. Hell, Steph is even crashing the boards to pull down 8.3 of them a night. Some of that's about effort and hustle. Perhaps more of it is about the Mavs' love affair with long-range shots that seldom fall.

Playing Dwight Powell more doesn't seem like a viable option the Mavs are interested in exploring. Maxi Kleber is a good floor-spacing frontcourt guy, but his confidence is completely shot at the moment. I don't know how or if Dallas can fix this. Who do they call on? MARQUESE CHRISS!? Idk. It really does come down to outgunning the Warriors in a track meet. Even then, winning Game 4 and then getting eliminated seems like the Mavs' best-case scenario with that strategy.

Thank you for this by the way, Jeremy Lin.

Dallas has a 35-12-1 record at home vs. the Under, but I'm thinking this will turn into a shootout if the Mavs have any sense and push the pace. Thus, I'm expecting quite a few players to hit their Over scoring props. I might be succumbing to recency bias in picking Dinwiddie to score more than Poole. Oh well. Seems like a reasonable flier at plus money. Curry is one of the best closers in the NBA. He'll do his best to take Game 4 over and try to get his team some extra rest before yet another NBA Finals.

I changed this at the last minute. The whole write-up I was thinking, "Dubs in 4." I do think the Mavs find a way to prolong this series, agitate the Warriors and force a Game 5 back in San Francisco. Golden State will be pressing for the sweep. All the pressure is off Dallas. One last ride with Luka. LFG.