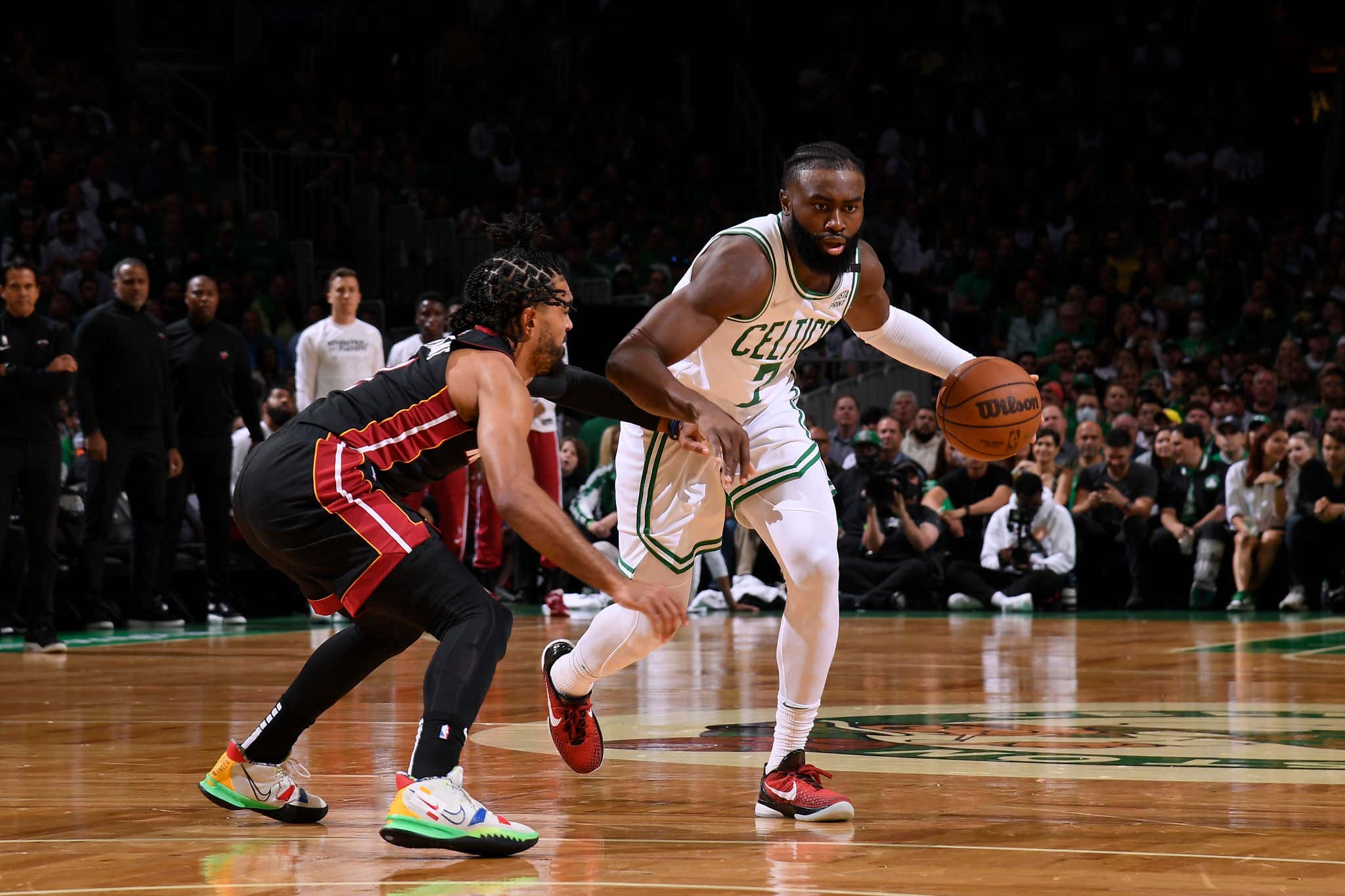 I'll continue to say this for anyone who'll read: NBA playoff injury reports SUCK. They're hyperbolic out of an abundance of caution I presume, and especially when you're trying to get your early work done on a Monday, they're a nightmare. Case(s) in point:

"Questionable" is supposed to equate to a 50-50 chance a player suits up. That's what all the Heat players are listed as outside of Tyler Herro, who's out. If we go by that logic, at least two key Miami contributors could be out of action for Game 4. It's also possible Boston is without either Marcus Smart or Robert Williams. Or both? On the other hand, it wouldn't surprise me in the least if ALL of these dudes play because, well, it's the Eastern Conference Finals.

So there you go. The Celtics are seven-point favorites tonight, even though they lost 109-103 in Game 3 as Miami played the entire second half without Jimmy Butler.

That has a nice ring to it, and it rings true. Heat coach Erik Spoelstra has never lost a Conference Finals series. Once it was revealed Butler wouldn't return after Game 3's halftime break, I was almost certain Boston would pull off a huge comeback and win. Instead, Spoelstra did what the fuck Spoelstra always does: He adjusted the rotation, guys stepped up, and Miami stole one in TD Garden.

Game 2 was a masterstroke by Udoka when he realized going small was the way to even the series. He subbed out Robert Williams for Grant Williams, and the Celtics went on a run where they outscored the Heat by 30. Now Udoka might be without Robert Williams and Defensive Player of the Year Marcus Smart in a must-win situation.

We've seen Grant Williams and Payton Prichard step up in big moments for Boston. Udoka has had counters for every bit of adversity that's come the Celtics' way. As much respect as I have for him, a seven-point spread seems extremely generous given how dangerous Spoelstra has proven to be time and again in these situations. Sometimes it's simpler than adjusting schemes, according to Udoka's own assessment:

Well THERE Bam Adebayo is!!

In my last preview, I pondered aloud (and then typed out) what the fuck was going on with Bam Adebayo. The man seemed to forget how much of an X-factor he was offensively. That changed in Game 3. Even before Butler went down with knee soreness, Miami wisely fed Bam early and often. He responded with a MONSTER performance of 31 points, 10 boards, six dimes, four steals and a block with just one turnover.

Where has this Bam been? And can he be counted on to deliver anywhere near this level going forward? If those two enigmas can be adequately answered, Miami may have unlocked a solution to advancing to its second NBA Finals in three years. Adebayo is likely to be closer to what we saw in Game 3 than the awful form he showed for much of the playoffs before then. He was +255 to record a double-double before the last contest, and as of my last checkup, Adebayo was at +170 for Game 4.

One Jay's pain is another Jay's opportunity

I'm quietly hating myself for writing that subheading. Doesn't mean it isn't accurate. Jayson Tatum (OU 39.5 pts, reb, ast) suffered some sort of stinger after a collision with Victor Oladipo, who by the way, played lights-out defense in Game 3 and had four steals. Jaylen Brown (OU 24.5 points) took it upon himself to try to spark a Boston rally the last time out and had 40 points.

Unfortunately, Brown also contributed to the rampant turnover problem the C's had, contributing seven of the team's 24 giveaways. Brown's ball-handling skills and playmaking ability, let's just say, isn't on the level of Tatum.

With Smart hobbled by a mid-foot sprain and a sprained ankle, he can't really be counted on to distribute. Brown has four postseason games where he's had 5+ assists, and will not only need to make the right plays passing the ball, but will need to come up big again as a scorer for the Celtics to optimize their chances of evening the series at two apiece.

Having said all that, if you're a Boston fan, you have to feel pretty good about losing by only six while committing so many turnovers.

Thanks to how deep Miami is, it's no surprise that even when they're shorthanded and being counted out, they manage to still compete at a high level. As underdogs, the Heat (+7/+235 ML) have the best SU and ATS records in the NBA at 16-11 and 19-8 respectively.

All postseason long, Kyle Lowry has been a shell of himself and has only appeared in six games as he's dealt with a nagging hamstring issue. Lowry returned in Game 4 and despite some obvious shooting rust, he had six assists to only two turnovers and had four steals. Oladipo has emerged as a not-so-secret weapon and, for my money, is the most underrated single storyline in the entire NBA playoffs.

Beyond Lowry and Oladipo, Miami has Gabe Vincent, Max Strus, $90 million man Duncan Robinson…it's actually kinda crazy how many capable role players are available for the Heat to call on at any given time — even with Tyler Herro out. Meanwhile, on Boston's side, you have the recently-ascended Pritchard and Derrick White, who's shooting 33.8% in the postseason and 23.7% from 3-point range.

I have a lot more faith in who the Heat can trot out in their guard rotation — even as so many of them are ailing — than whatever the Celtics have behind Brown and Smart.

Tough night last night. Only hit the Under in the Warriors-Mavs Game 3. Did say Luka would get a double-double, but Dallas didn't win. I thought it was obvious that the Mavs would rebound and find a way to grind out a victory last night. Instead, Golden State showed the separation between a true championship-caliber team and one built around a single superstar.

So I can't really create a one-to-one comparison between those events and this series, because Miami and Boston both play brilliantly as a unit. Due to Tatum's lingering shoulder issue and inconsistency in big spots, I can't in good conscience believe in a Celtics blowout. I think the Heat find a way to at least cover, even with Brown probably going for 30+ points again. I had Miami winning Game 3 with the +200 pre-tip moneyline. Not going that far here because of their massive injury report, even though they've won four of five as underdogs vs. Boston.

With this many guys banged up on both sides, I'm thinking the Under is gonna hit. The Over is 10-3 in the last 13 matchups. We're past due for a low-scoring grindfest many would expect from these stout defensive squads.