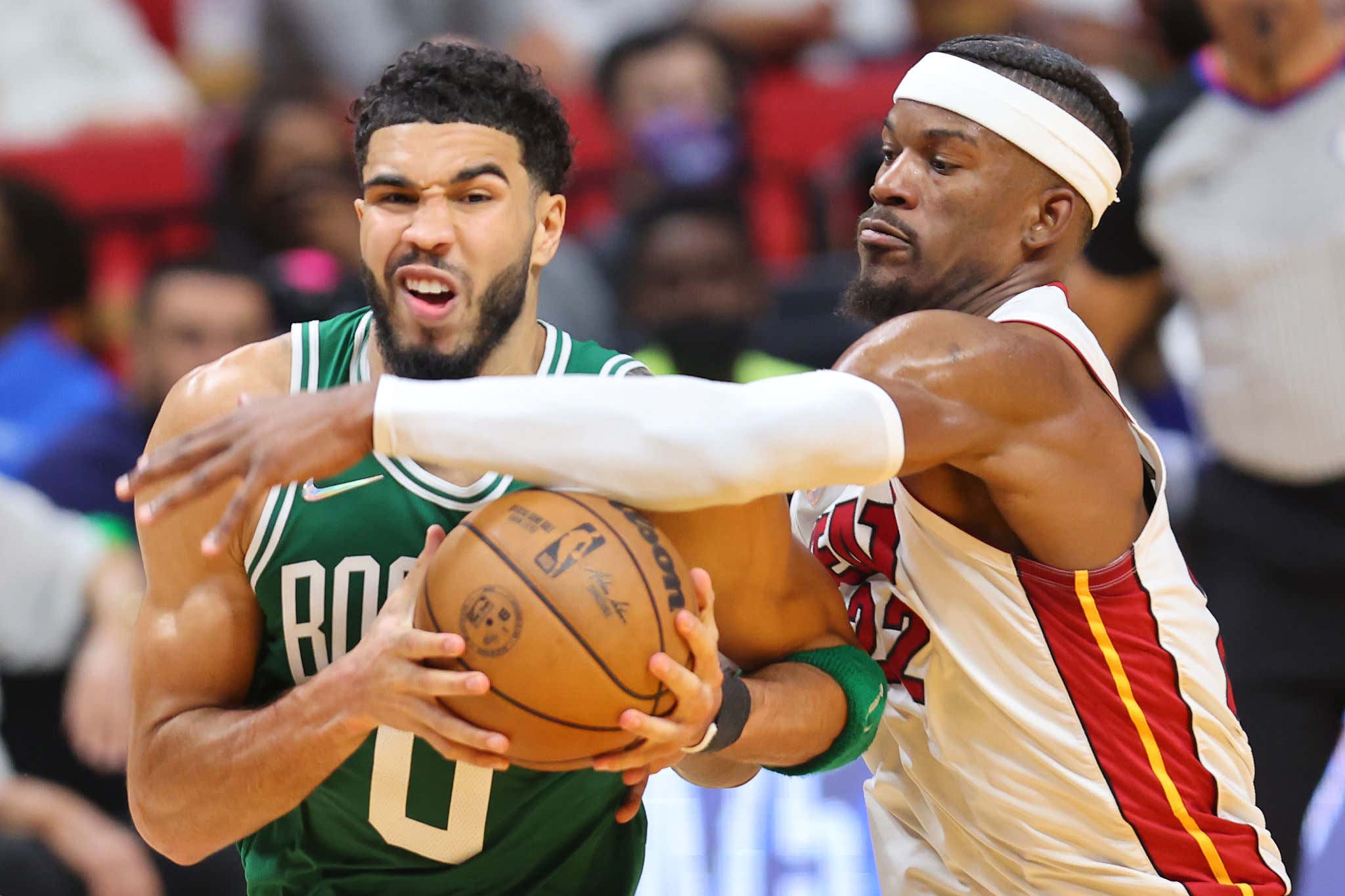 Despite the best individual efforts of Jimmy Butler, the Miami Heat let home-court advantage slip through their fingers and lost for the first time in 11 contests at FTX Arena in Thursday's 127-102 rout. Because of how convincing that victory was for the road-warrior Boston Celtics, they're six-point favorites in Game 3, and have -250 odds to advance in the latest Eastern Conference Finals series market. You can also get them at -130 at -1.5 games.

Looks like the bookmakers are bracing for a Celtics-Dubs NBA Finals. Maybe they're right. Or maybe Miami will have something to say about that. Anyway, here's Saturday's betting preview for what should be a phenomenal showdown at TD Garden.

WTF is up with Bam Adebayo?

This isn't being discussed enough. Bam Adebayo (OU 24.5 pts, reb ast) was a double-double machine in the regular season who averaged 19 and 10, not to mention a legit Defensive Player of the Year candidate, only to lose out to Marcus Smart. In the playoffs, Adebayo has been a completely different dude — and that's not a compliment.

Who would've thought Adebayo would be a +255 bet to get a double-double? I understand that the Celtics have an excellent defense, yet Adebayo's decline has predated this series. When he's firing on all cylinders, the Heat's center is not only a phenomenal, versatile defender, but also an impact scorer who can also handle the rock and distribute to the multitude of capable teammates he has on the perimeter.

You could argue that Butler's singular brilliance has contributed to a lower usage rate for Adebayo. Nevertheless, he's had plenty of opportunities to make an impact and has fallen well short of his typically high standards. I don't know what the hell has gotten into him. Adebayo did have four blocks in Game 1, which was a nice sign...it's just that his effort is far too inconsistent and he hasn't had a double-double since the second-round opener against Philadelphia.

Part of what makes Miami's smaller lineups so difficult to contend with is Adebayo's unique skill set. Without him at the top of his game, their ceiling is much more limited. We're finding that out quickly. Even more of a red flag for the Heat is how much success the Celtics had the last time out when they decided to fight fire with fire and go small themselves.

They swapped out Williamses in the middle of the first quarter, and proceeded to outscore Miami by 30 points leading into halftime. By then the outcome was all but decided. As valuable as Robert Williams is defensively, Grant Williams has been an absolute breakout stud for Boston.

This guy shot 25% on 96 3-point attempts as a rookie two seasons ago. Talk about player development. Jayson Tatum (OU 27.5 points) and Jaylen Brown will be the primary concerns for the Heat, but Williams is an X-factor who's only gaining confidence the deeper the C's go. The way Williams can spread the floor creates more lanes for Tatum, Brown and even Marcus Smart to attack, so Williams' impact in that regard can't be understated.

No one's a better underdog than Miami

In 11 of the last 16 meetings between these squads, the underdog has won. I don't know if I'm joking or not when I say this: If you're going to pick the Heat, you might as well take them to win at an alternate spread. The max at Barstool Sportsbook is Miami -7 at +500. That doesn't make any sense based on what happened in Game 2 and the fact that Boston is at home with all the momentum. Not sure it's the wrong play, though.

Consider this: In the past 14 playoff games counting last night, the average margin of victory is 21.6 points. The Warriors' crazy rally to top Dallas 126-117 was the second-closest matchup in that span. Blowouts have been rampant in the 2022 postseason. I don't recall seeing anything quite like it.

Circling back to the main premise of this subheading: The Heat (+6/+200 ML) are 20-11-1 ATS coming off a loss, 11-10 SU as a road underdog with an NBA-best +1.2 point differential, and 18-8 ATS/15-11 SU as a dog overall. That's a testament to the culture they've built, and how fantastic coach Erik Spoelstra is at making quick, savvy adjustments. Spo's counterpart, Ime Udoka, buried Miami with his small-ball power move in Game 2. Let's see how Spoelstra responds.

Heat Culture is for real, but so is Celtics' depth

It's wild that Miami shelled out a $90 million contract to Duncan Robinson, only to barely play him in the games that count most. Robinson had a mostly down season by his standards. The Heat will do anything to win, no matter the status of any given player on their roster. That's how Victor Oladipo has risen up in Kyle Lowry's injury-induced absence, and why former UDFAs Gabe Vincent and Max Strus are in the starting five.

Lowry is intent on playing in Game 3, according to Spoelstra. The former Raptor is a past NBA champion who could give the Heat the lift they need amid their latest bout of adversity. Having so many supporting cast members step up shows the type of sound organization that's humming in Miami, but a proven champ like Lowry adds a little something extra.

Something similar is brewing in Boston. Grant Williams has already been touched upon, and with Robert Williams questionable due to knee soreness for the C's, Grant has proven capable of stepping up in big spots. Just how bought-in is everyone in Year 1 of the Brad Stevens exec/Ime Udoka coach era? Read no further than this:

Boston also has a fantastic reserve guard in Payton Pritchard who's scored in double figures in each of the last three games while averaging four boards and three assists to boot. So yeah, the Celtics have depth in spades just like Miami does, along with a fantastic, true team effort on defense to match the Heat's trademark intensity in that department.

Finally did it yesterday! Had a 4-0 lineup of plays featuring Warriors -6, Steph and Luka hitting their Overs for points and the total points line going over as well. Going to go with a similar formula for tonight. I'm sure I'll now go 0-4. There I made the joke for you.

I thought Jimmy Buckets would hit the Under in Game 2. Now I've come to realize this dude will do anything and everything he can as a scorer to will the Heat to the NBA Finals for the second time in three years. His sheer volume of shots should lead to at least 27 points. As for Smart, he's not known for his offense. We all know this. So while I don't see him taking 22 shots like he did in his last appearance, Smart did have 12 assists in Game 2. He has at least eight dimes in four of his last five starts. Gonna ride that trend.

Odds favor the Celtics. Trends favor the Heat. I'm riding Miami here — precisely because it makes little sense. It's more like a self-fade of what my instincts are telling me will happen, aka recency bias. That's how this bizarre NBA postseason has generally been. The Over should also hit due to how many scoring threats both teams have, and how fast-paced and physical the action should be. I'm expecting LOTS of free throws to inflate the final score.