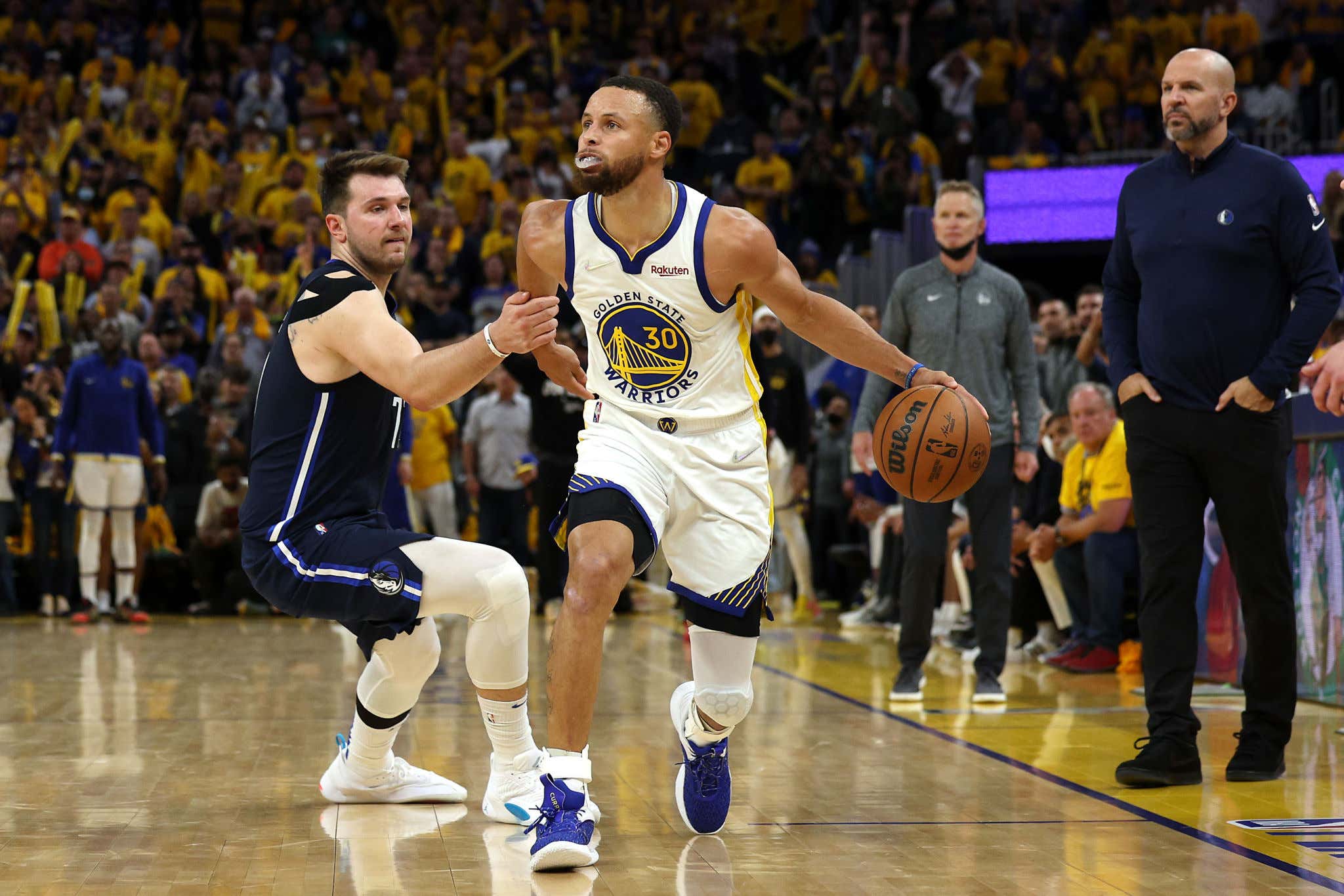 WHAT A COMEBACK. I wrote before that Luka Doncic would need to put up something near a 40-10-10 performance for the Dallas Mavericks to have any chance for a road win at Golden State. Well, Luka had 42-5-8 and three steals, but it wasn't enough.

Thanks to an absolute barrage of first-half 3-pointers, the Mavs were crushing the Warriors early and led by as many as 19. Luka was locked the fuck in, and even more impressively, his teammates were just CANNING treys left and right.

But this is the Golden State Warriors we're talking about. They were going to make halftime adjustments. Stephen Curry had 20 first-half points, so he was on enough to where you couldn't count the Dubs out. Dallas was putting its live-and-die-by-the-three philosophy to the ultimate test, and it was working in the early going. Jalen Brunson was hot as hell, too, and wound up with 31 on the night.

Then reality set in. The Warriors started changing up their defenses, increasing the physicality and intensity, bringing more swarming zone looks and did their best to front Luka with multiple defenders so he couldn't just clear out and either get his own shot or easily drive and dish to open shooters.

Although the Mavs still finished 21-for-45 from 3-point range, they only hit six 3-pointers after the break. Golden State is the team everyone associates with absolutely raining on opponents from downtown, but it was actually 38 points in the paint in the second half (62 total) that helped the Warriors get back in it. They were able to get easy buckets around the rim, dedicate more energy to the defensive end and ultimately prevail in the final quarter with a 43-point explosion.

Who was the MAN who sparked the Warriors' turnaround on both sides of the floor? Kevon MF Looney, that's who!! Looney had a career-high 21 points to go with 12 rebounds, as he continues to be a revelation in the Warriors' starting lineup.

Even crazier? Looney was a pivotal cog in Golden State's success while Draymond Green sat with five fouls. While Green was on the bench, the Warriors outscored the Mavs 34-15. WOW.

Draymond is an all-world defender. He was out of action during the majority of the hosts' comeback — though he did can a key shot before fouling out:

Curry led the Warriors with 32 points, mixing in a healthy dose of long-distance brilliance (6-for-10 from beyond the arc) and crafty finishes around the rim. Golden State's HIM also had the most badass celebration following a late, dagger three:

Jordan Poole came off the bench to add 23 points of his own. Only two triples for him, as Poole was able to contribute to the close-range barrage Golden State poured on Dallas.

So damn. I had Warriors -6, Steph Over 27.5 points, Luka Over 31.5 points, and the Over total points line to hit. A 4-0 night! LFG!!! But I was convinced the Mavs were going to at least cover when they were dominating early.

Welp, this series is headed back to Dallas. You might be saying, "That's a wrap. Teams who go up 2-0 in the Conference Finals are 71-6 all-time." Normally a safe assumption, except the Mavs were just in this situation last round against the Suns, and wound up winning in seven. That said, hard to imagine they can shake this one off and find a way to win four of the next five.