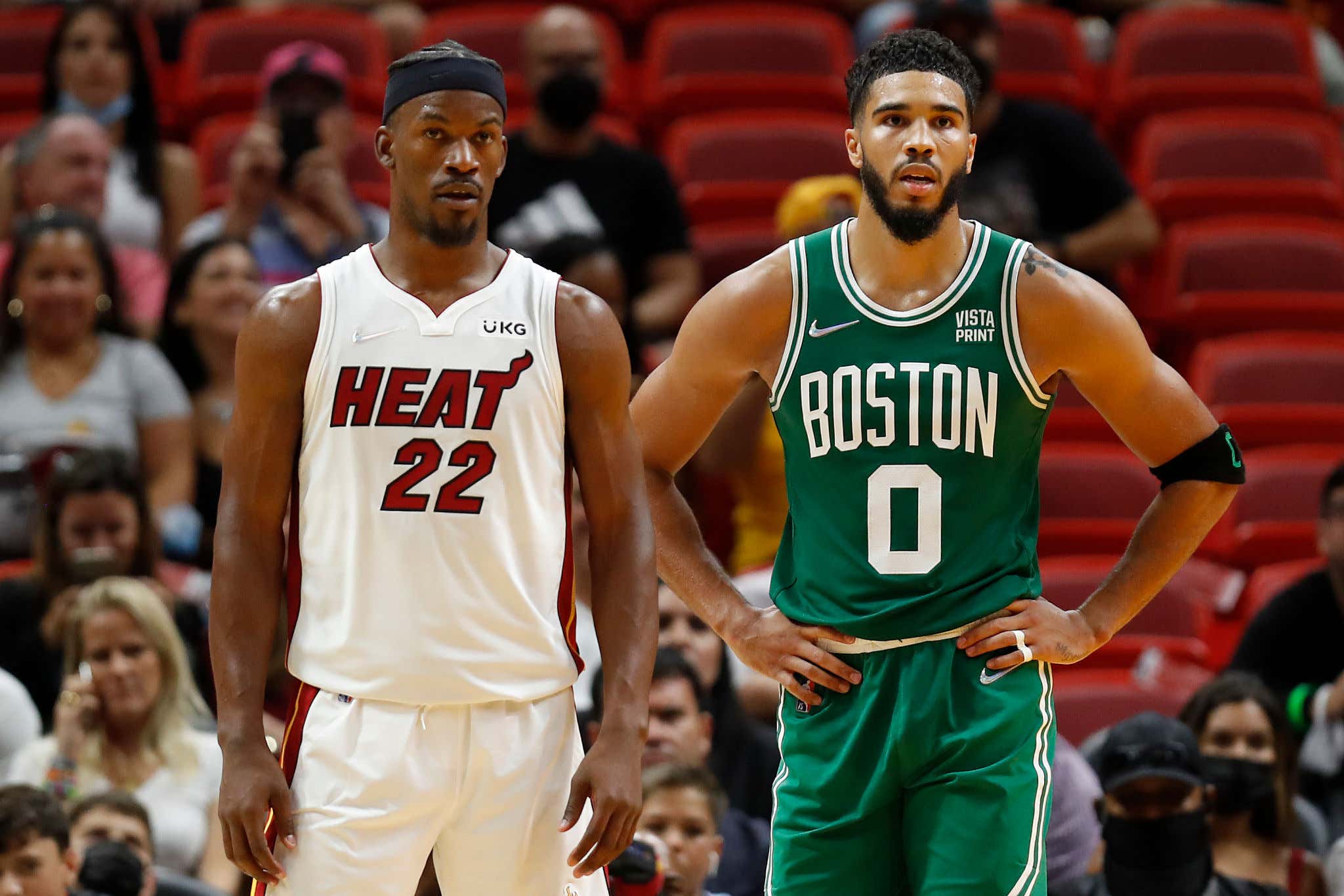 The NBA's version of the Final Four tips off tonight in Miami, as the Heat host a Boston Celtics team with an NBA-best +7.4 point differential on the road. However, the Heat (-2) win by an average of seven points per contest at home, so something's gotta give.

Boston (+110) won the regular-season series 2-1. As we saw with the 64-win Phoenix Suns, the regular season doesn't really mean shit to a certain point. That said, you have to admit the Heat and C's benefited from being the East's top two seeds and home-court advantage through the first two rounds.

So let's get into this thing then, as Boston tries to avenge its loss to Miami in the 2020 Bubble Conference Finals.

Heat need to leverage their advantage on the glass

One way Miami can gain an edge and set a tone in the series is rebounding, where they surrender the fifth-lowest offensive rebounding percentage in the playoffs (24%) and hit the offensive boards at the third-highest rate (31.6%). Getting those second-chance opportunities against a Celtics squad that ranked first in defensive rating this season will be huge. Boston has 29%/25.6% splits in those respective categories.

Although some of those numbers are skewed because of Giannis big-boying the Celtics in the paint oftentimes during the conference semis, it's worth noting that Miami gets an extremely balanced effort when crashing the glass. The Heat's top six average postseason scorers all contribute between 3.8 and 7.7 boards a night. That's the hype of hustle that could prove to be the difference in a close contest. P.J. Tucker, for instance, pulls down an average of 5.6 rebounds and 1.9 on the offensive end. He's had 6+ boards in 11 of his last 15 vs. Boston, and his Over 5.5 line is at +110.

You don't think of Miami as having tremendous size. It's a lot of smaller lineups with Bam Adebayo at the 5. Nevertheless, they find a way to produce. Boston is similar in that way, yet struggles on both ends of the floor when it comes to second-chance opportunities.

Celtics must be wise with Marcus Smart, counter with Williams

I wouldn't go so far as to label Game 7's romp over the Bucks a Pyrrhic victory for Boston. Unfortunately, it came at a severe cost all the same:

To springboard off that last section, Robert Williams' absence from the lineup has been one reason the Celtics haven't been as good on the offensive glass this postseason. The dude averaged nearly four such boards per game, while also being an elite rim protector.

In Williams' stead, Al Horford reached within the depths of his soul to pull out a 30-point effort at Milwaukee in Game 4 of the previous series. Horford's ability to guard can't be underestimated. He was dealing with the buzzsaw that is Giannis. I imagine he'll have more energy and opportunity to contribute in all areas without having to worry about the Greek Freak. Not to say Miami's Adebayo is a slouch whatsoever. Giannis is just different.

So yeah, if Williams truly does have no minutes restriction, I'd expect him to have a massive impact tonight. Marcus Smart is the Defensive Player of the Year, though, and even if he believes he can play on a sprained foot, he probably shouldn't. Jimmy Butler (OU 24.5 points) seems like a strong candidate to smash his Over scoring prop given Smart's dubious status.

Can Grant Williams and Payton Pritchard take C's to another level?

In Game 7, Grant Williams and Payton Pritchard combined for 11 3-pointers and 41 points. I imagine that's a flash in the pan that won't happen again, given the lengths to which Williams has to expend his energy on defense and how sparingly Pritchard has played. On the other hand, this could be the start of something special for Boston. When you're drawing praise from arch-nemesis Magic Johnson, you're doing something right.

Now that I've gassed up Grant Williams to such a degree, I'm here to tell you it's a pretty good time to hammer his Under scoring prop. He's listed at -134 to net Under 8.5 points.

But imagine if the Heat have to worry about this pair in addition to the elite offensive talents of Jayson Tatum (+100 to be leading scorer) and the consistency efficiency we've all come to expect from Jaylen Brown (OU 23.5 points). That makes the Celtics all the more difficult to prepare for.

If I were a Heat fan, I'd be a little terrified about the prospect of Boston's supporting cast pitching in to the degree they did against last year's NBA champions. Tatum has evolved a lot as a player since shooting 42.2% and 26.4% from 3-point range in the 2020 Conference Finals. Brown was phenomenal in that six-game set, averaging 23.2 points on 55.5%/52.5% shooting splits.

Miami's home court, coaching, continuity and culture count for something

Couldn't help myself with all the alliteration there. Sorry I'm not sorry.

Just because it's all alliterative doesn't mean it's not true! As impressive as Ime Udoka has been in his first year as Brad Stevens' successor on Boston's bench (yeah, I'll keep going!!!), Erik Spoelstra is a proven, championship-winning head coach whose knack for adjustments, gaining tactical leverage and maximizing the strengths of his players is second to none.

Spoelstra has had the backing of Pat Riley, and has taken, more or less, this core of players to the NBA Finals as recently as 2020. He also beat Boston to get there. This Heat team is a little deeper, more experienced, and is better equipped to defend the likes of Tatum and Brown. The coach will definitely have some new wrinkles to throw at the Celtics' top two scorers.

Coaching doesn't feel like as big of a deal in the NBA as many other professional sports…until you get to this stage of the playoffs. A mismatch in that area tends to be magnified. While I don't think Udoka is out of his depth by any means, Spoelstra's resume speaks for itself. You can't not take into account what he's built in Miami in the post-Big Three era.

Not sure if that Adebayo vs. Smart scoring prop duel will be up forever, so might as well jump on it while you can, because there's serious doubt that Smart can even play tonight, much less be effective as a scorer. His strong suit is obviously as a defender. Adebayo should outscore him even if he has a more difficult time than usual, presuming Robert Williams is full-go.

Smart's injury didn't matter much when Boston obliterated the Bucks 109-86 in Game 2 of the conference semis. This is different, though. The Heat aren't missing an All-Star like Milwaukee was with Khris Middleton. It's also a quick turnaround for the Celtics, as Miami had a longer rest due to disposing of the 76ers in six.

Between all those factors and the mild coaching upper hand with Spoelstra, I have the Heat covering. Miami will want to come out strong in Game 1 and put to rest any lingering doubts that their bubble triumph over Boston was a fluke or somehow invalid.

This Eastern Conference Finals opener should be an ugly, hard-nosed clash with plenty of quality defense. That 204 total points line still feels low. In the past 10 meetings between these squads, the Over is 7-3. The line seems set low enough to ride that trend.