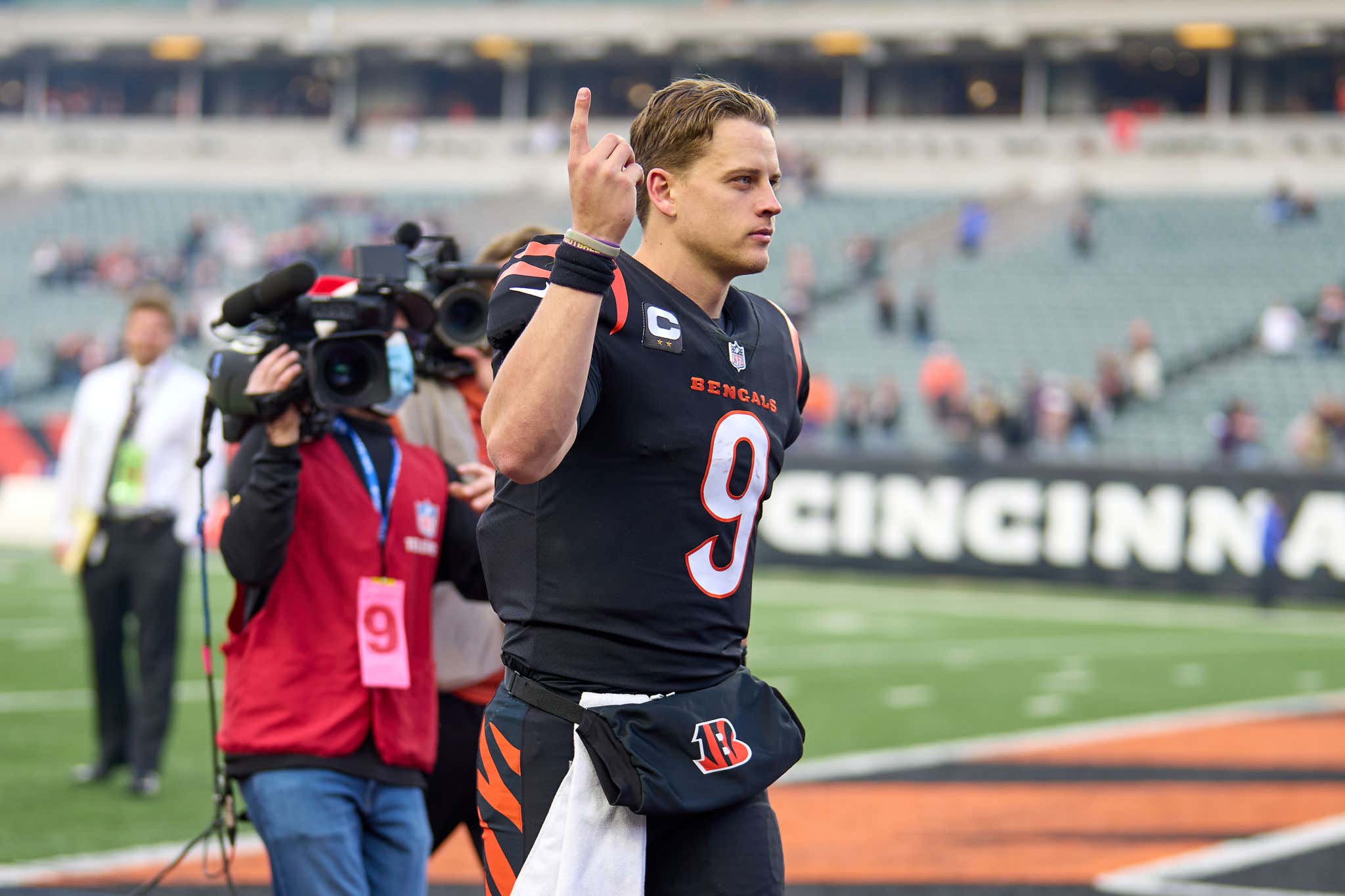 Weird that some people believe the AFC champion Cincinnati Bengals are some sort of joke. If the NFL schedule makers were so concerned about a smaller-market franchise suffering from a Super Bowl hangover and flopping, why would they award them with five prime-time games?? To watch them collapse?

Nah. Because Joe Burrow is the quarterback. Ja'Marr Chase is the WR1. The defense is locked, stocked and loaded. And the offensive line is FINALLY, vastly improved. So yeah…look the fuck out, haters and doubters.

Someday when the season gets closer I'll go through every game and make a record prediction. For now, we'll begin with breakdowns on the most widely-viewed matchups — and some sound rationale as to how the Bengals can win all of them.

Even though Tyreek Hill got held to zero catches during Cincinnati's stunning rally to win the AFC Championship Game, he's going to be a problem to deal with. Hill and Jaylen Waddle give Miami arguably the most explosive pair of receivers in the entire NFL. So even if the Bengals deploy some of the tactics that helped contain Hill in KC, Waddle will still draw favorable one-on-one matchups.

New Dolphins coach Mike McDaniel builds his offense around a zone running game. He has a deep stable of backs to work with, and the o-line should be improved from last year thanks to the additions of tackle Terron Armstead and guard Connor Williams. However, Tua Tagovailoa is still an unknown commodity at the most important position, and Cincinnati has…? Joe Burrow.

The Bengals also have plenty of playmakers in their receiving corps. It's not like Miami can turn this into a shootout and have it work in their favor. McDaniel's inexperience as a head coach is likelier to show on a short preparation week. The massive edge Burrow has head-to-head against Tagovailoa is a huge disparity I can't see the Dolphins overcoming, especially on the road.

I'm here for the McDaniel soundbites above everything else Miami-related, TBH.

I'm fully anticipating the Ravens playing ANGRY in 2022. They were ravaged by injuries more than any team I can recall in the past several years. Lamar Jackson went down toward the end of the season, which is why they missed the playoffs.

Two of Baltimore's past four first-round picks will go a long way in determining the outcome of this AFC North clash. Second-year wideout Rashod Bateman had a quiet rookie campaign. He'll be counted on as Jackson's WR1 in the aftermath of the Hollywood Brown trade. I also think the weird contract situation with Jackson and the fact he hasn't negotiated a new deal yet, combined with Brown's unceremonious exit and Greg Roman's dubious play design, has the potential to cause friction.

That other draft pick for the Ravens I'm referring to is first-year safety Kyle Hamilton. I'm not sure how Baltimore will deploy him. They already have Marcus Williams and Chuck Clark in place at the position. Hamilton can be a big nickel and sort of freelance in multiple spots. I'm skeptical that he and Bateman will be ready to make massive, game-changing impacts in Week 5 — and I loved both of them as prospects coming out.

None of Baltimore's pass-rushers really scare me, and Cincinnati's overhauled offensive line should be able to withstand the exotic pressures the Ravens like to throw at every foe. This Bengals receiving corps is one of the few who can win the majority of the time against Baltimore's stacked defensive backfield. Plus, Burrow obliterated the Ravens in 2021 with 941 yards passing, seven TDs and a 131.1 rating in two starts.

This one doesn't require as much explanation. If Deshaun Watson is suspended, Cincinnati wins this one going away. Even in the event Watson does suit up, he'll be under all kinds of scrutiny. The entire pregame conversation will revolve around the outstanding civil lawsuits filed against him for sexual misconduct, provided they aren't settled by then. Watson has given no indication he'll settle and will fight to clear his name.

It's so odd to imagine the Browns hosting a prime-time game, with their fans and the Dawg Pound going absolutely nuts for a QB with such ominous accusations from 22 different women hanging over his head. Going to be a strange, awkward night to say the least.

Nick Chubb is an absolute beast in the backfield for Cleveland. If the Bengals can prioritize stopping Chubb, they match up well on the back end with a mostly uninspiring Browns receiving corps. Their No. 1 target Amari Cooper has four 100-yard games in his last 28 starts. Cincinnati's Ja'Marr Chase had four in a five-game stretch toward the end of last season and into the playoffs.

I know Burrow projects the coolest, calmest exterior and doesn't let much get to him. You don't think he's heard all the bullshit about failing to beat the Browns to date? Here comes another accomplishment to add to Burrow's rapidly-expanding resume. It'll be even easier if Jacoby Brissett is Joey B's Halloween night counterpart.

"Well, the Bengals have Joe Burrow and the other team doesn't." That could be reason enough to pick Cincinnati to win any given Sunday. In this instance it's especially true. As much respect as you need to have for Heinz Field and what the Steelers have accomplished there, I don't see how Pittsburgh can overcome the worst QB situation in its division.

Whether the Steelers trot out rookie Kenny Pickett or busted top draft pick Mitch Trubisky to run the offense, the Bengals secondary should have a field day against them. I'd be more worried about their receiving corps if Chase Claypool wasn't so inconsistent. They also aren't great at the center, left guard and left tackle positions, which doesn't bode well for their ability to run the ball with Najee Harris, or to stymie Cincinnati's solid defensive front.

This Pittsburgh defense is another year older at key spots, particularly in the trenches. The unimpressive personnel at cornerback is also problematic. Facing the likes of Chase, Tee Higgins and Tyler Boyd won't help. Even if there's inclement weather at play, Cincinnati's improved blockers can help Joe Mixon pile up yards on the ground against a Steelers D that ranked DFL in yards per carry allowed (5.0) this past year.

Oooooh boy. The Bills have the QB (Josh Allen) and the weapons (led by Stefon Diggs) to go toe-to-toe with the defending conference champs. I wasn't in love with Buffalo's pass rush…then they decided to fuck around and acquire Von Miller. The future Hall of Famer still has plenty in the tank, as we saw him flourish during that Super Bowl run with the Rams.

Buffalo had the sixth-worst run blocking and 14th-rated pass blocking offensive line in the league last year, per PFF. Allen has the improvisational ability, strength to break tackles and raw playmaking talent to overcome any deficiencies there, as he's an excellent ball-carrier in his own right on designed plays or on scrambles.

This is where we'll know just how impactful the top of the Bengals' 2022 draft class can be. Daxton Hill is a gadget defensive back who can align in three-safety sets, play a pure slot corner role, or even get out on the perimeter if Lou Anarumo wants to try him there. Cam Taylor-Britt may also be counted on to be the CB2 opposite Chidobe Awuzie, who'll have his hands full with Diggs. The hope is CTB can be an upgrade over Eli Apple. If he is, I'm even more bullish on the Bengals' chances to win, particularly at home.

Kaiir Elam is the Bills' first-rounder who's expected to start at outside corner, with Tre'Davious White locking down the other half of the field. White is coming off a torn ACL, which isn't nothing. Elam is a high-risk, high-reward player the Bengals can exploit as he navigates his maiden year as a pro. Not that Allen isn't capable of doing that to CTB or Apple with his bigger-bodied target Gabriel Davis, but I feel like that's the absolute wheelhouse for Burrow when he takes shots downfield to Chase and Higgins.

Safety play will loom large here, too. Buffalo has one of the game's best tandems in Micah Hyde and Jordan Poyer. Cincinnati has Jessie Bates and Vonn Bell. An absolute barn-burner all around. So how do the Bengals win this one? Their superior secondary depth, slight edge on the o-line and the confidence they can draw from their Super Bowl run should all work in their favor in a showdown that should come down to the final possession.