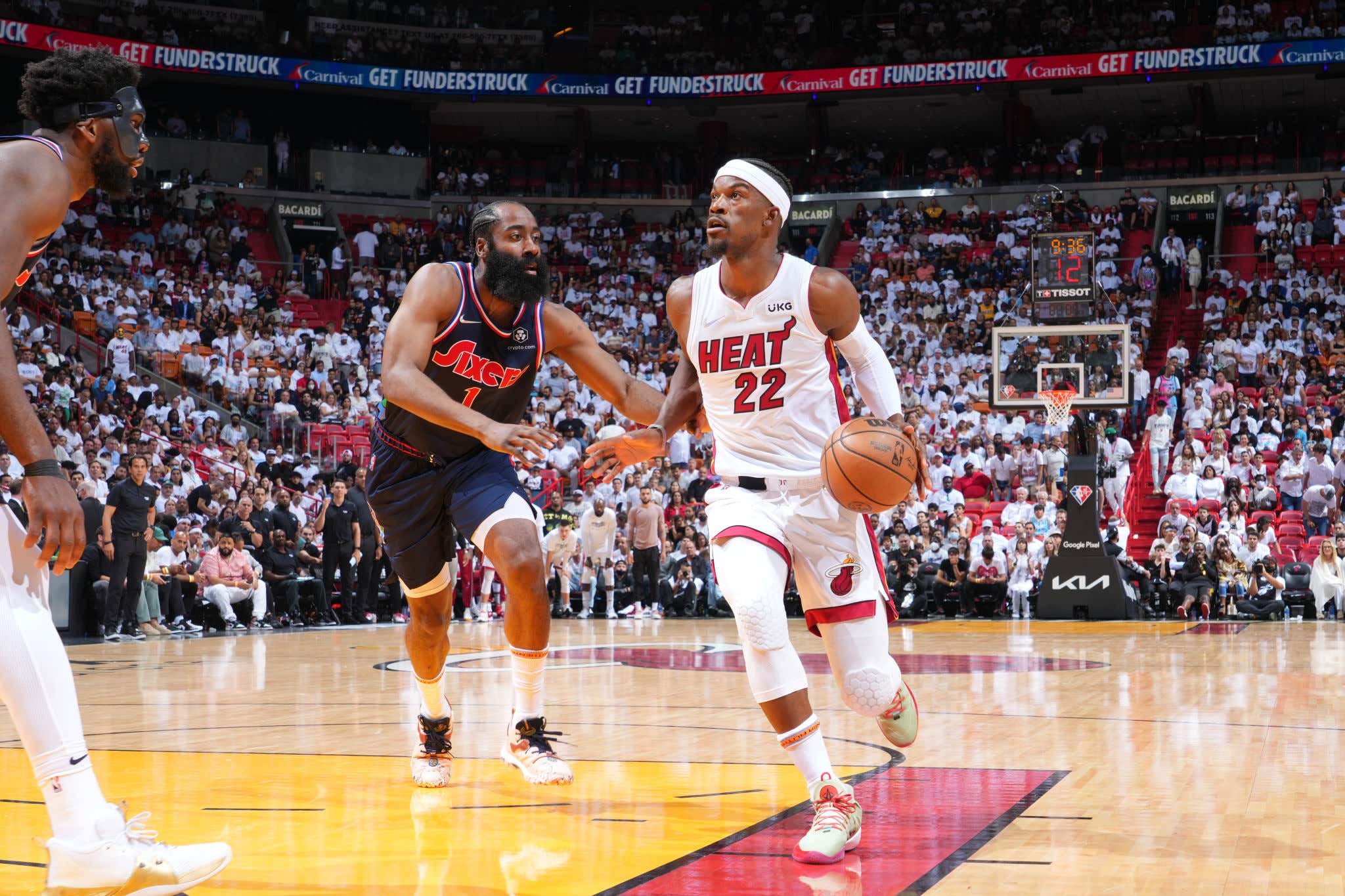 We could have our first two Conference Finals teams on Thursday if the Miami Heat and Phoenix Suns are able to steal Game 6 on the road at Philadelphia and Dallas respectively. Considering how wild the NBA playoffs have been thus far and how the home team has won every single contest in both these series, I'm not holding my breath. At least one of these matchups seems destined to go the distance. Since I'm saying that, well, brace for Heat and Suns victories tonight!

Betting preview let's roll. Good vibes yesterday from Jrue Holiday's monster bounce-back performance and the Bucks covering (and winning outright). Don't even know what to say about that Warriors-Grizzlies blowout that I haven't already said.

Sixers must be having seller's remorse on Jimmy Butler

Well, it's not entirely accurate to say Philadelphia sold away Jimmy Butler (OU 38.5 pts, reb ast), but they did alienate him to the point where he had no interest in returning to the team once the Sixers pulled off an all-in trade to acquire him several seasons back. Butler took his talents to South Beach thereafter, and now could be spearheading a second Heat NBA Finals appearance in a three-year span.

Meanwhile, the Sixers (-2) decided to hold onto Ben Simmons, only to trade him at the latest NBA trade deadline for an abruptly-ejected-from-his-prime James Harden. Can you imagine what might've happened if Philly stuck with Butler, bailed on Simmons sooner and built around Jimmy Buckets and Joel Embiid? What an NBA "what if?" that is.

The reality is, Embiid is terribly banged up, and looked as mortal as he has in many moons during Game 5's 120-85 humiliation. Tyrese Maxey has had an excellent postseason thus far, as has Tobias Harris (Over 6.5 rebounds, +110), who's had 7+ rebounds in his team's last seven playoff games as favorites.

It's just that the Heat (+107) are so much deeper, have such better chemistry, and don't have an expired superstar they're overly dependent upon like the Sixers are with Harden. Also, when it comes to ATS record, Miami is tops in the NBA as an underdog at 17-8. In the past seven meetings between these teams, the hosts have prevailed. If there were any time for that trend to be bucked, it seems like this would be it, as the Heat seem to have unlocked something that led to Philadelphia shooting 36.5% in the last duel.

Although you can give Philly a pass because of how banged-up Embiid is, that doesn't take away from the fact that he is on the brink of going home early yet again — and would prolong his wait for a Conference Finals debut.

Heat coach Erik Spoelstra overthought things by pressing Kyle Lowry back into action for Games 3 and 4, presumably thinking it was necessary. Lowry was ineffective and nowhere near 100% due to a hamstring injury. With Lowry wisely being rested in Game 5 and now for Game 6, Miami should be better positioned to get a win away from home and secure a berth in the NBA's Final Four.

Whatever Dallas figured out in its two victories over Phoenix in Games 3 and 4 on the defensive end was abruptly forgotten when the Mavs ventured back out to the desert and got walloped 110-80. They shrank on the other end of the floor, too, as Luka Doncic and Jalen Brunson seemed like the only players interested in trying to score a basket.

Pretty much, if the Suns are playing to their potential, the Mavs can't fuck with them. Dallas is so dependent on Luka and is clearly at least a piece away from contending for a title. Despite some inconsistency in the past two series, Phoenix always seemed destined to make it to the Conference Finals no matter who stood in their way.

The sheer willpower of Luka is something to appreciate, however. When his back is up against the wall, he tends to be at his best.

Dallas (+108) is 10-1 SU in its last 11 at home — but only 2-12 in the last 14 matchups with the Suns. It seems almost too easy to just bet Phoenix's moneyline, because this is the exact trap bettors fell for in the two previous contests at American Airlines Center. As long as the Suns just let Luka get his and shut down everyone else — doesn't seem too difficult of a task — I don't know how they don't win Game 6.

Phoenix floor general Chris Paul (+145 to record a double-double) has been stunningly quiet over his last three starts. The same guy who made all 14 of his shots from the field in a close-out win against New Orleans has averaged eight points, seven assists and 4.3 turnovers of late. Don't know WTF went down with CP3 since he turned 37 last Friday. I'm inclined to say he'll snap out of his funk, bounce back, and help the Suns move on.

Every non-Sixers fan is ready to see that team get out of these playoffs. Miami is clearly the superior squad at this point, especially with Embiid battling through multiple injuries. That Over/Under line has been my nemesis all postseason. Time to ride the Under since the Mavs hit it so often at home. You can see in the above tweet how low Luka's points prop is set in relation to his averages in these high-stakes situations. He hasn't quite been on as a shooter in the last three, so like Paul, he's due for something special.