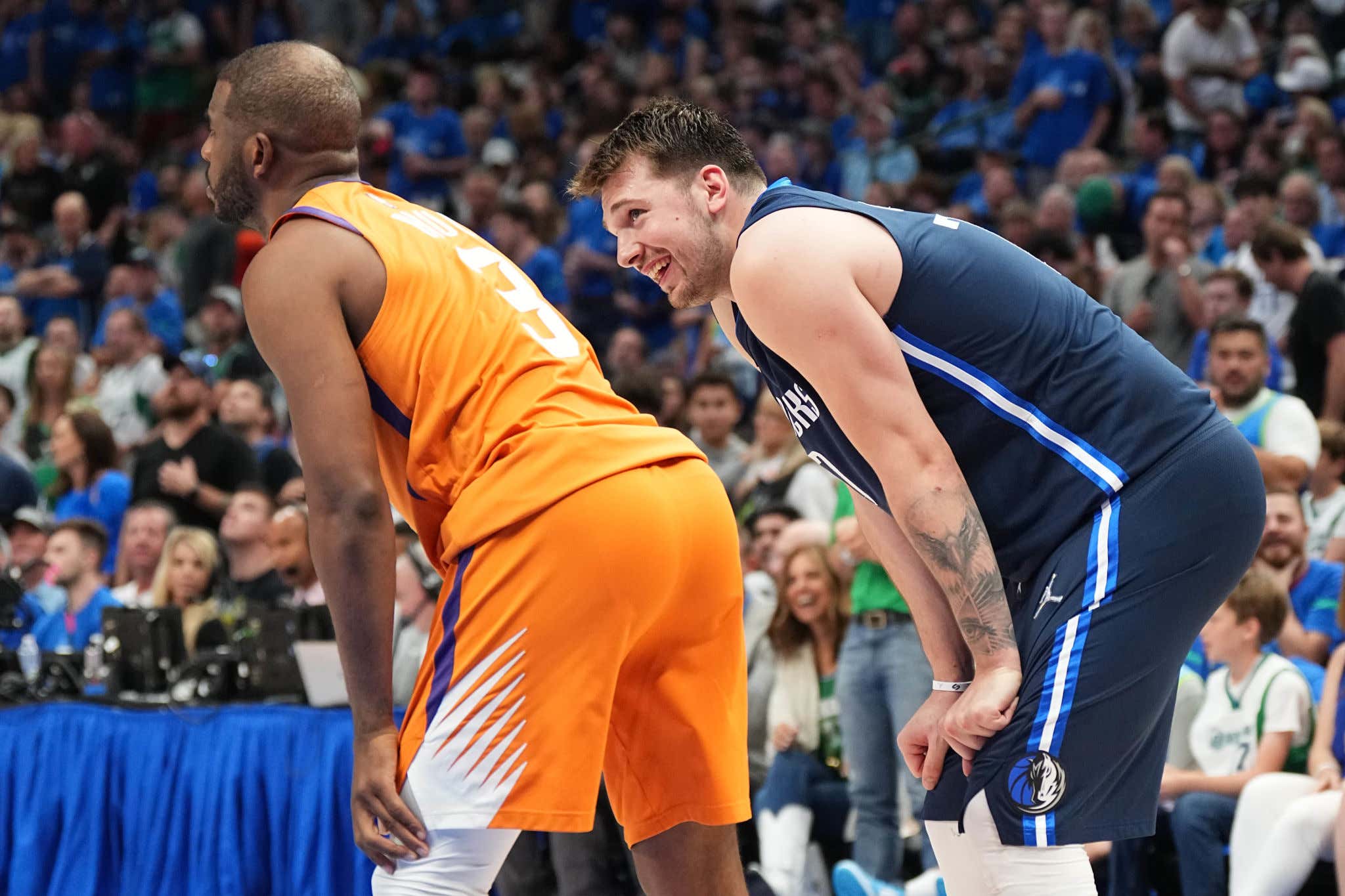 Hooooooo Happy Tuesday! Two Game 5 showdowns in series that are tied at two apiece, involving both the No. 1 seeds in each conference in the Miami Heat and Phoenix Suns. Is that any good? Intriguing? The home team has won every game of both sets, so if that holds true, both flame-themed fan bases should be happy.

PS, yesterday's preview featured a potentially-too-subtle April Fools' joke that involved the Grizzlies beating the Suns without Ja Morant, the purpose of which was to underscore how they'd compete well against Golden State (I picked Memphis +10.5, and they covered). I'm aware Phoenix and Memphis aren't playing each other.

Anyway with that out of the way, if you've been riding my plays of the day, I apologize for some of the recent total points picks. I can't nail an Over/Under to save my fucking life right now. Thank you to the Celtics for scoring 42 fourth-quarter points, and to you, Al Horford, for suddenly kindling the hottest competitive fire you've ever shown by ~14,562 degrees. Good for Big Cat. Sharp as obsidian on that Over call.

The Process is punishing #HEATCulture

This subheading applies to Joel Embiid (OU 25.5 points) and his nickname, but also to the contrasting cultures these organizations have had over the years. To begin with Embiid, his inspired return to the court from multiple injuries gave the Sixers a lift they couldn't have gotten from anywhere else. Beyond the psychological impact, though, Embiid did lead the NBA in scoring and is a transformational force on the defensive end even when he's far from 100% healthy.

As for Heat Culture vs. The Process, well, Miami (-3) has gone about rebuilding in its post-Big Three era with the mentality that they're in it to win it every year. There's no tanking for better draft status. No crazy overpaying in free agency. It's about finding players who fit their organization, developing them better than anyone else and creating a great combination of a cost-effective roster and depth.

Philly's all-in approach to trade for James Harden comes in the aftermath of their years of failing and tanking. A cornerstone of that Process movement, Ben Simmons, was the centerpiece of the Harden deal. The Sixers (+123) will nevertheless still find themselves on the brink of elimination with a loss tonight. It'd mark yet another season in which Embiid fails to reach the Conference Finals.

Part of the Heat's problems of late has been coach Erik Spoelstra's strange inability to make adjustments to the rotation that seem obvious. Like, Kyle Lowry is playing really, really badly and doesn't seem quite over his hamstring injury. Rather than riding Victor Oladipo and the other guards more, Lowry stunk it up in Philadelphia.

THEN, perhaps more egregious: Spoelstra seems repulsed by the notion of throwing 3-point marksman Duncan Robinson onto the hardwood, even as all the numbers suggest the $90 million man could be a big help.

I would be stunned if Robinson didn't get the call tonight. He didn't live up to his contract this season. I think he was a little in his head about how much money he signed for last summer. But now, this is where he can totally redeem himself. The home crowd is starving for 3-point shooting, and if Robinson starts lighting it up, he could almost single-handedly swing this entire series.

A big key for Philly is the play of its talented trio flanking Embiid. Harden poured in 31 in Game 4's victory, yet I have a hard time believing he'll be that productive as a scorer again when facing Miami's excellent group of perimeter defenders. Tobias Harris had 11 fouls in the past two wins, so he'll need to avoid the whistles to stay on the floor. Then there's Tyrese Maxey, whose quickness, shooting prowess and versatility make him a nightmare to guard with Embiid and Harden attracting a lot of attention.

Pretty close to call, eh? When in doubt, bettors have been rewarded for sticking with the home team when these squads have met. The past six duels have seen the hosts cover, and Miami (-148) has won eight straight overall at FTX Arena.

Future Hall of Fame point guard Chris Paul has been shockingly bad in the past two contests. He committed six of his seven Game 3 turnovers in the first quarter, and fouled out of his next start after only 23 minutes of action. CP3 attempted only 13 shots, scored 17 points, and has 11 assists to nine giveaways while picking up 10 fouls in back-to-back losses.

You also can't discount the fact that Scott Foster won't be officiating tonight. That's all the more reason to believe Paul will get some favorable whistles and what not, as Foster, as far back as I know, has a 14-0 playoff record against CP3.

I'm usually a game early on this Law of Averages stuff. This might be an exception. For Phoenix (-6), losing hasn't been common this season given its 64-18 record. To stumble twice in Dallas is definitely a red flag, especially since the Suns had defeated the Mavs 11 times in a row before hitting the road this series. All that considered, it's a little surprising that bookmakers are so high on them. Then again, if you assume Paul will bounce back, it's rather easy to see how Phoenix could ride the momentum of being at home and run away with this one.

Experience tends to matter the deeper you get into every series. The Suns are superior in that intangible category. What they don't have is someone who impacts the game offensively in as many ways as Mavs superstar Luka Doncic (OU 50.5 pts, reb, ast). He averaged a triple-double across Games 3 and 4, setting up teammates nicely even as he was having some struggles as a shooter.

As you can see, several key members of the Mavs supporting cast are capitalizing on clean looks from beyond the arc. Both Dorian Finney-Smith and Reggie Bullock are even-money bets to hit Over 2.5 3-pointers. That seems generous. In other prop news, I'm surprised that, as of this writing, 66.7% of bets are on Luka's Under 32.5 points. Umm, this is the biggest make-or-break game he's ever played in, so I think he'll go down swinging and shooting at a high volume.

It seemed like the Suns were going to absolutely roll the Mavs after the first two matchups. Then, Dallas buckled down on defense and didn't back down from its hit-threes-or-die philosophy on the other end of the court. I don't know if the Mavs have what it takes to pull the upset in the desert. Home-court advantage has been such a big deal in this series. Typically, defense does travel, so I'm at least a little bullish on Dallas covering the spread.

I can recognize that I tend to be too dependent on trends sometimes. I'm more inclined to follow them rather than fade them. Having said that, I can't help but take Miami to cover. They're so good at home, and like I mentioned before, the X-factor Duncan Robinson potentially represents gives them a strategic edge. I'd be shocked if Spoelstra gets outcoached by Doc Rivers yet again.

On the Maxey side of things, he's averaging 22 points in the postseason, and his Over hitting implies Harden taking a step back from his breakout Game 4.

Plenty to chew on regarding the CP3 analysis. Here are a couple more numbers that make me feel good about his double-double prospects: Paul has scored at least 19 points in eight of his last nine playoff starts in Phoenix. He's had 10+ assists in 13 of his latest 16 home games, too. Even with CP's expected resurgence, however, I'm betting on the Mavs sustaining their strong defensive effort well enough to hit that +6.