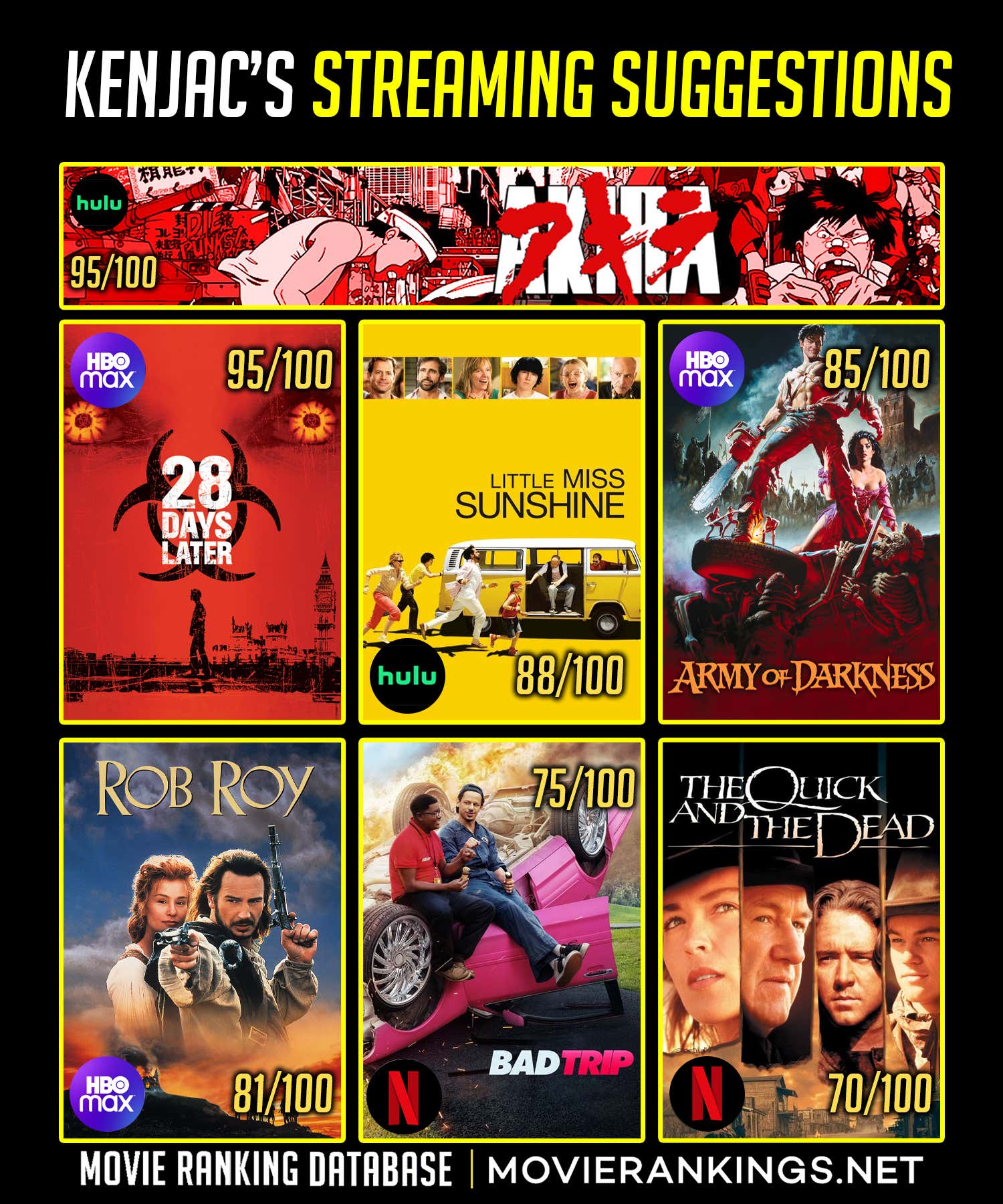 This mix of a scripted buddy comedy road movie and a real hidden camera prank show follows the outrages misadventures of two buds stuck in a rut who embark on a cross-country road trip to NYC. The storyline sets up shocking real pranks.

I had zero hopes for this movie when it came out because I thought prank movies were dead. But the novelty of them is really revived by Eric Andre, and this movie gave me some of the biggest laughs I had over quarantine.

A mysterious woman comes to compete in a quick-draw elimination tournament, in a town taken over by a notorious gunman.

I have a huge soft spot for this weird western. It has a retroactively stacked cast and has some cool gunfights and solid Ole west dialogue.

A family loaded with quirky, colorful characters piles into an old van and road trips to California for little Olive to compete in a beauty pageant.

This is an indie that isn't everyone's cup of tea, but I think those of you looking to expand your horizons a little may really like it. Hmmm, I'm acting like it is some totally unknown indie, which isn't true. It's very popular and relatively mainstream lol.

A secret military project endangers Neo-Tokyo when it turns a biker gang member into a rampaging psychic psychopath that only two teenagers and a group of psychics can stop.

This sci-fi anime has inspired almost every cyberpunk movie to come out after it either directly or indirectly. It's a great watch and the dub is there for those of you that don't like subtitles.

In 1713 Scotland, Rob Roy MacGregor is wronged by a nobleman and his nephew, becomes an outlaw in search of revenge while fleeing the Redcoats, and faces charges of being a Jacobite

This is a very solid Liam Neeson role that flies under the radar for most people around my age. It's a good revenge story and Tim Roth plays one of the greatest british bad guys ever.

Ash is transported back to medieval days, where he is captured by the dreaded Lord Arthur. Aided by the deadly chainsaw that has become his only friend, Ash is sent on a perilous mission to recover the Book of the Dead, a powerful tome that gives its owner the power to summon an army of ghouls.

If you have watched 'Dr. Strange and the Multiverse of Madness' or are planning to watch it soon, this is a great movie to watch after. This franchise is where Sam Raimi built his bones and you can see elements from these movies in every work he made after.

Twenty-eight days after a killer virus was accidentally unleashed from a British research facility, a small group of London survivors are caught in a desperate struggle to protect themselves from the infected. Carried by animals and humans, the virus turns those it infects into homicidal maniacs -- and it's absolutely impossible to contain.

To me, this movie is the gold standard of zombie movies. Perfectly build suspense and horror and a great blend of actual zombie action and "what would happen to society???" thought stuff.

Btw, make sure to check out the last episode of THE BRACKET. Very funny ep where we learned a LOT about Steven Cheah.
movies+ 5 Tags