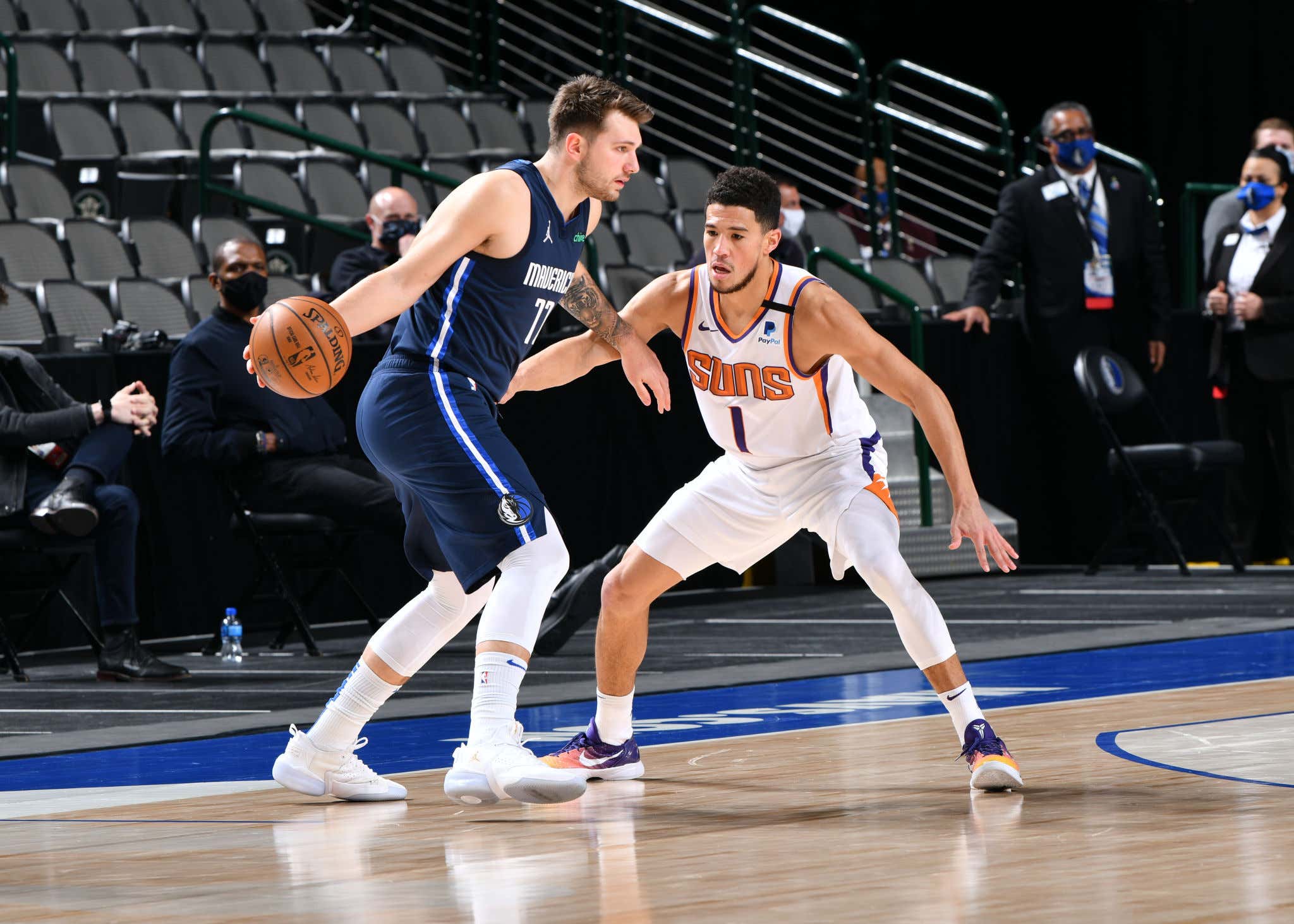 If you're asking yourself why I'd spin the headline in such a way, you're about to find out. The Miami Heat and Phoenix Suns are the No. 1 seeds in the East and West respectively. Despite that, they're not the favorites to make it out of their own conferences and to the NBA Finals.

Phoenix (+130) trails Golden State (+100) out West, and Miami (+190) is behind reigning champion Milwaukee (+170). So if it's possible to be the first seed and have a chip on your shoulder, I think the Suns and Heat will have some form of that mentality entering the conference semifinals.

That alone is a juicy-enough backdrop to get excited about Monday's Game 1 action, so on we go.

Sixers are huge underdogs in battle of shorthanded squads

No shock to see Philadelphia (+270) on the business end of a massive 7.5-point spread in Miami. Joel Embiid won't return until the series goes back to Philly at earliest, but the Heat have some injury issues of their own. They'll definitely be without starting point guard Kyle Lowry, and Jimmy Butler is questionable due to knee soreness. Tyler Herro is questionable as well because of an unspecified illness. That's a LOT of guys potentially out for the hosts.

I mean look at this brutal injury report. How much does Embiid's individual impact weight in contrast to the Heat's extensive list?

Part of the reason Miami is still so highly regarded on the betting lines is Victor Oladipo's exceptional performance in a Game 5 spot start vs. the Hawks. Oladipo led the Heat with 23 points on 16 shots in the 97-94 close-out win. No props are open for Oladipo as of this writing due to the dubious nature of the Heat's lineup. It says a lot about the respect the oddsmakers have for Miami.

A decent, albeit juiced-up prop to consider is Bam Adebayo Over 3.5 assists (-134). He's had at least four dimes in nine of his last 11 playoff games. Hell, you may want to ride every Over for Adebayo, because it's at least possible that Miami will have a threadbare Game 1 rotation.

What I'm wondering is about the Sixers is this: Was jumping out to a 3-0 lead over Toronto, then blowing the next two the wake-up call they needed? They obliterated the Raptors 132-97 in Game 6. Much of that is thanks to Embiid. Still, to dish out that kind of beatdown goes beyond the big man's own contributions. You can at least talk yourself into James Harden, Tyrese Maxey and Tobias Harris being a good-enough trio for Philadelphia to challenge such a potentially undermanned Heat team.

It's almost like if the Sixers don't capitalize on how vulnerable Miami is in Game 1, this series will feel all but over after the opener. And even with Embiid healthy, Philadelphia has had a -2.7 average points in the paint differential in the playoffs, compared to the Heat's +10. That doesn't bode well for the Sixers, especially when you realize Miami allowed just a 33.9% clip from 3-point range en route to earning the No. 1 seed.

Yeah, that boldfaced line pretty much says it all. The Suns (-5.5) have absolutely had Dallas' number over the past two years or so. Devin Booker is also back in action after missing some of Phoenix's first-round series against New Orleans.

Speaking of overcoming adversity, though, Luka Doncic was dealing with a calf issue in the opening round, and the Mavs found a way to win twice while he recovered. This team is deeper than they're given credit for. In Luka's absence, Jalen Brunson (OU 27.5 pts, reb, ast) was a revelation and has hit 31+ points, rebounds and assists in Dallas' last four as underdogs.

Each of Phoenix's past six victories over the Mavs were by single digits. It's not like Dallas (+188) is getting destroyed. Additionally, the team is in sync right now, averaging only 8.7 turnovers a night in the Jazz series. You also have to consider that Booker showed a little rust in his last outing, whereas Luka has come out firing on all cylinders in his three postseason starts.

Also, Suns Point God Chris Paul (OU 10.5 assists) can always be counted on as a distributor. He's had at least 11 in 12 of his past 14 at home. The thing is: Paul shot 14-FOR-14 IN HIS LAST GAME. I tend to cite this more often than most, but it holds true and I don't think it's an oversimplification: The Law of Averages. That principle alone suggests CP3 is due to regress, not to mention his 37th birthday is on Friday! And how can we expect Paul to be at all consistent at this late phase of his career?

Phoenix low-key didn't play very good defense against the Pelicans (115.6 defensive rating). I'm not sure whether they'll improve in this series or not. Dallas takes such a high volume of 3-pointers (41.8 per contest in the playoffs), and the Suns are only hitting 31.9% of their own long-range attempts. With how well Doncic and Brunson can get his own shots and create for others when they drive and dish, I'd be a little concerned about the matchup if I were a Suns fan.

The Mavs' knack for avoiding turnovers, litany of lethal perimeter shooters and legit greatness from Luka make them a tough out for anyone. They had the No. 2 scoring defense in the NBA during the regular season, too.

I'm inclined to say that Miami could still cover with so many players banged up or not quite themselves. Adebayo should have such a huge advantage in the paint and the freedom to roam around defensively with Embiid inactive. I have a hard time seeing how either team would light up the scoreboard, hence my call to take the Under in that one.

Dallas is an objectively superior team to the spunky Pelicans bunch Phoenix just had worlds of trouble with. Again, all the recent Mavs-Suns meetings have been tight. I feel like Monday's visitors may be playing the better overall basketball at the moment. For safety I'm taking Dallas to cover, yet they're worth a flier on the moneyline given that it's nearly a 2-to-1 shot.