National title day. One of the best days of the year where you have all this build up, a 3 week stretch that for sure goes by too fast and 2 teams making the way through the bracket. We'll have everything covered here, breakdown of game play, picks, etc. Long way to go until the game so sit back and get ready. 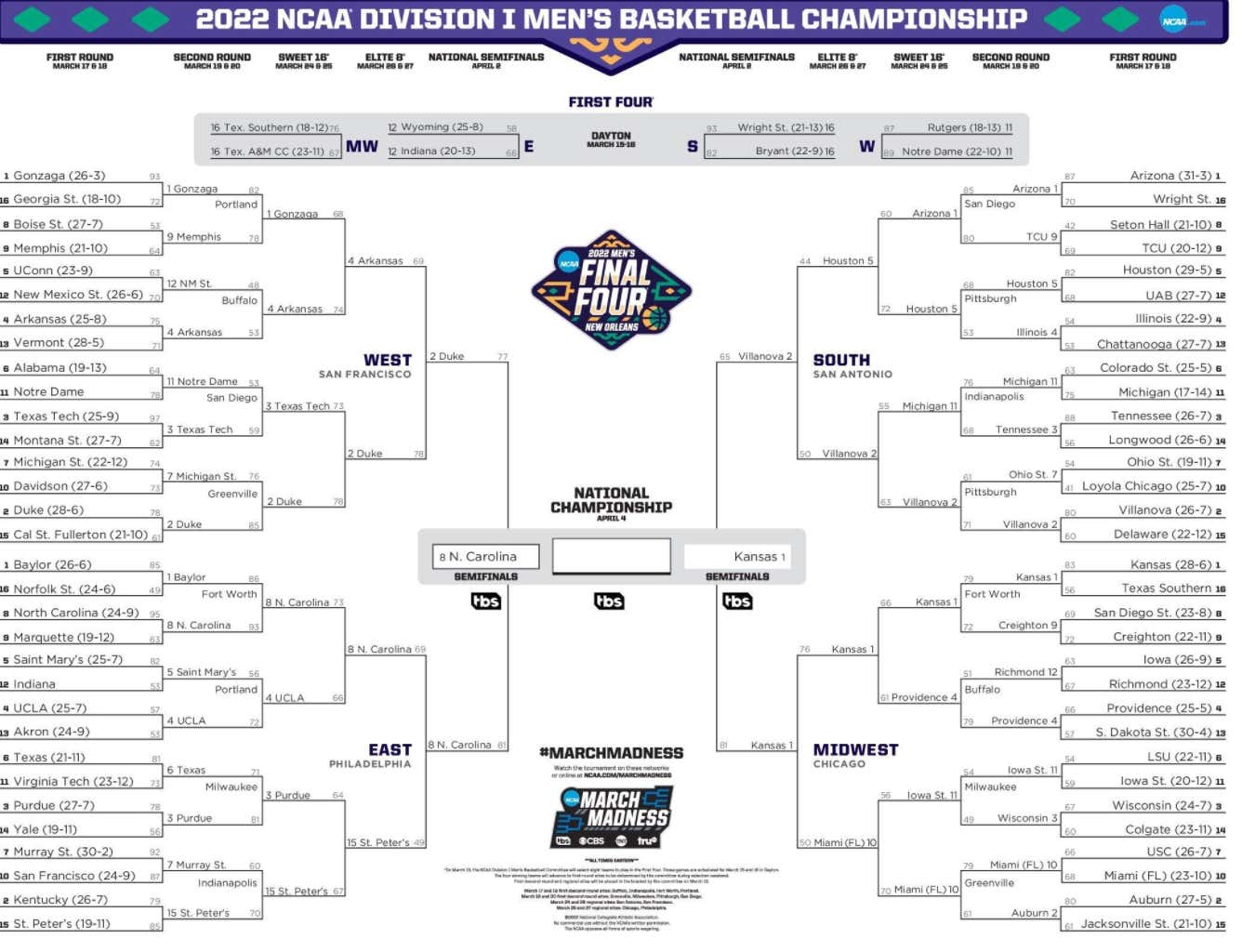 UNC on offense: We can talk about Bacot and Manek and we will, but the biggest reason UNC is here is Caleb Love. Not only is he scoring and hitting some ridiculous threes, he's reading the ball screen better than he has all year. When he's able to break people down off the ball screen that opens up the offense. You either have to hedge which means the pop with Manek is open or the roll with Bacot is open. If you dig that means the kick is open where you have shooters on the floor. It's very basic sounding but when UNC is doing this, they make the title game. Obviously you also have to bring up the fact UNC and Bacot dominate the offensive glass. That's why they are willing to take so many threes.

Kansas on offense: Here's where Kansas is most dangerous. Why? Because they switch their offensive gameplan on the fly better than anyone. During the Tournament, Remy Martin was a key figure in ball screens to get the offense in motion and running. Against Nova, he was barely a factor and it was playing through McCormack and Agbaji. I wouldn't be shocked to see a mix in this game, especially with Bacot's ankle. Don't be surprised to see them use him in the ball screen while also running Agbaji off the ball.

UNC's defensive theory: They are going to try to keep Bacot in drop coverage on ball screens, daring Kansas to hit midrange shots or jumpers. They'll put Leaky Black, their best defender, on Agbaji to start and then rotate because he defends the best offensive player. That's where Kansas has a huge advantage. You have Martin, Agbaji, Wilson and even Braun as guys who can go off in this game. UNC plays a relatively conservative defense. They are 356th in turnover rate. They rely on getting in break situations off of rebounds. 2nd in defensive rebounding percentage and 8th in not fouling. That right there is the key to watch.

Kansas' defensive theory: One of the best defensive moves we've seen in this Tournament was against Miami when Bill Self put David McCormack on Jordan Miller - a non-shooting threat. He didn't care about the cross matchup where Waardenburg is their 5 but a shooter. It let McCormack stay in the lane and clog it all up. UNC doesn't necessarily have a non-shooter though - Leaky Black is their worst and hit 2 dagger threes in the Final Four. They'll ICE ball screens and keep McCormack low in coverage.

1. Armando Bacot's ankle - I talked about it here, but you can hear it again. He's not 100%. UNC doesn't have a bench and for sure doesn't have a backup big. How healthy will he be or look?

2. UNC let down game - You're asking college kids to rebound in 48 hours after ending the career of Coach K. Yeah a national title game is easier to get up for than anything else, but it still feels like a let down spot. The first 5 minutes can really show what happens in this game. Kansas blitzed Nova early and they were spooked. That's why Nova was never able to get over the hump.

3. Ochai Agbaji All-American or not - One of the weirdest runs for Kansas has been the fact that Agbaji was like their 6th best player in the Tournament until the Final Four. This is First Team All-American Ochai Agbaji. If you get that version of him along with what we've seen from everyone else, Kansas is the best team in the country.

Christian Braun over 1.5 threes (Even)