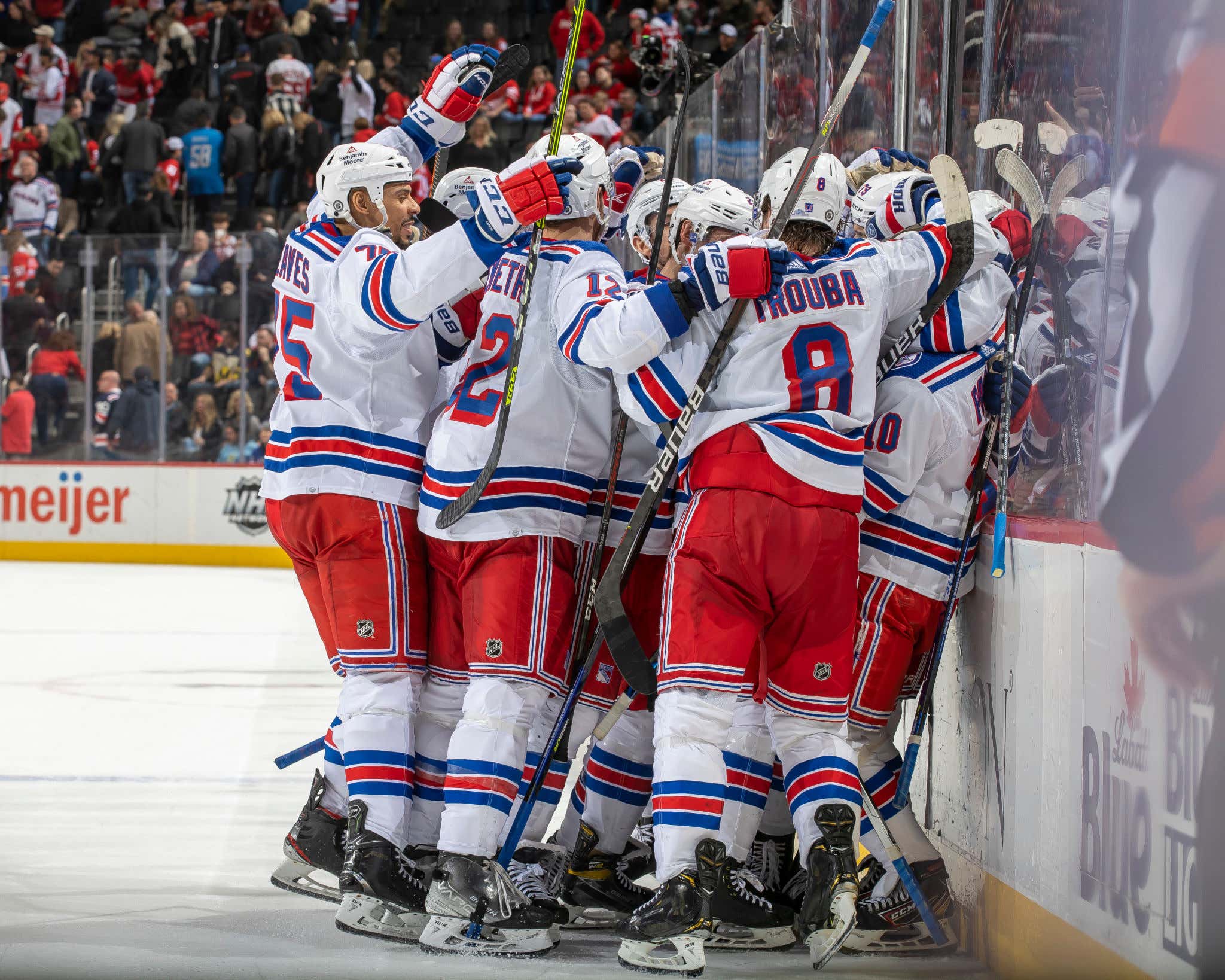 After the Rangers blew a 2-0 first period lead in Jersey early last week & were utterly embarrassed 7-4, everyone acted like the sky was falling. For the next couple days I kept trying to reason with pessimistic fans & haters alike saying it was just an outlier. A bad game. It happens. They just came off of a back-to-back road sweep of TB & Carolina yet people wanna cuncel da saeson because of a blip on the radar? Whatever...but then I saw the ultimate insult. I saw the Rangers Metro division odds jump from +900 to +2000 and I had to stand up for my squad. The disrespect was just too much. So right before a 5-1 shellacking of the Penguins I put my money where my mouth is:

Since then the Rangers have reeled off four straight, including a pair against Pittsburgh, while the odds now sit around +700-900. They finished March to the tune of 11-4-0 - no other team had more wins - and if you go back another month they've won 7 of their last 8 against Eastern playoff teams (13-5 overall). Meanwhile the Canes wrapped up a mediocre March at 8-4-4 thanks in large part to a 3-4-2 record against Eastern playoff teams. Not a good sign for Carolina to be struggling against quality opponents as they step into the final month of the regular season.

I could understand the "smoke & mirrors" arguments about the Blueshirts through January. Other-worldy goaltending and an elite powerplay helped mask a team that was analytically the worst at 5x5. Now wins count however you can get them, but it's a tall order to ride that formula to success for an entire season and then playoffs. Since February 1 though their 5x5 metrics rank right in the middle of the league which is a drastic improvement. With Shesterkin and an automatic PP1 unit, "mediocre" is actually excellent...and they keep getting better. After the low-cost deadline additions of Copp, Vatrano & Motte:

small sample but I am saddened to report that the NY Rangers are giving me hope...

It's only five games but man, if Gallant can get this squad to consistently dictate 5x5 play on top of everything that carried them the first half of the season then his Rangers are gonna be a problem for whoever they face in May (and June?). Their best month of the year came despite their MVP looking like a mere mortal (although it was really just two brutal starts) and horrendous netminding from his backup. It's a minor miracle NY has won Georgiev's last four starts despite his 2.96/.889 line - a line that includes an incredible 44-save blanking of the Carolina team they're chasing which should tell you how abysmal he was in his other three contests. The Rangers trailed in all three & needed overtime for all three but still got the job done. That's the sign of a club putting it all together at exactly the right time.

The Blueshirts trail Carolina by 5 points and are stepping into as cushy an April schedule as any team could ask for. 10 of their remaining 14 tilts are at home & their away games are right around the block in Jersey, Philly, Long Island & Boston. They'll be sleeping in their own beds until the postseason, facing non-playoff opponents 9 times and host two crucial matchups against the first place Hurricanes. Meanwhile, Carolina's 14 left are a 7 & 7 home/road split that includes a west coast trip to Colorado. While they're certainly one of the league's top road squads it's a far cry from their utter dominance at home. These teams split the first two games, both roadies for the Rangers, and Shesterkin didn't play in either of them. Assuming Gallant rides Shesty against top competition to find his playoff groove it'd be no surprise at all if they pull out all four points.

Then it's just a 1-point difference between the squads with 12 games a piece to play. A coin flip. Bottom line is, there's still a very realistic shot for the Rangers to win the Metro if they play just slightly above their season pace while Carolina slips a tad. You know, like what just happened this past month. if April is a mirror image of March it'll be the Blueshirts playing leapfrog & hosting a wild card matchup while I'm collecting 20 large on a bet that will be forever remembered as the bet that singlehandedly changed the fortune of a franchise.