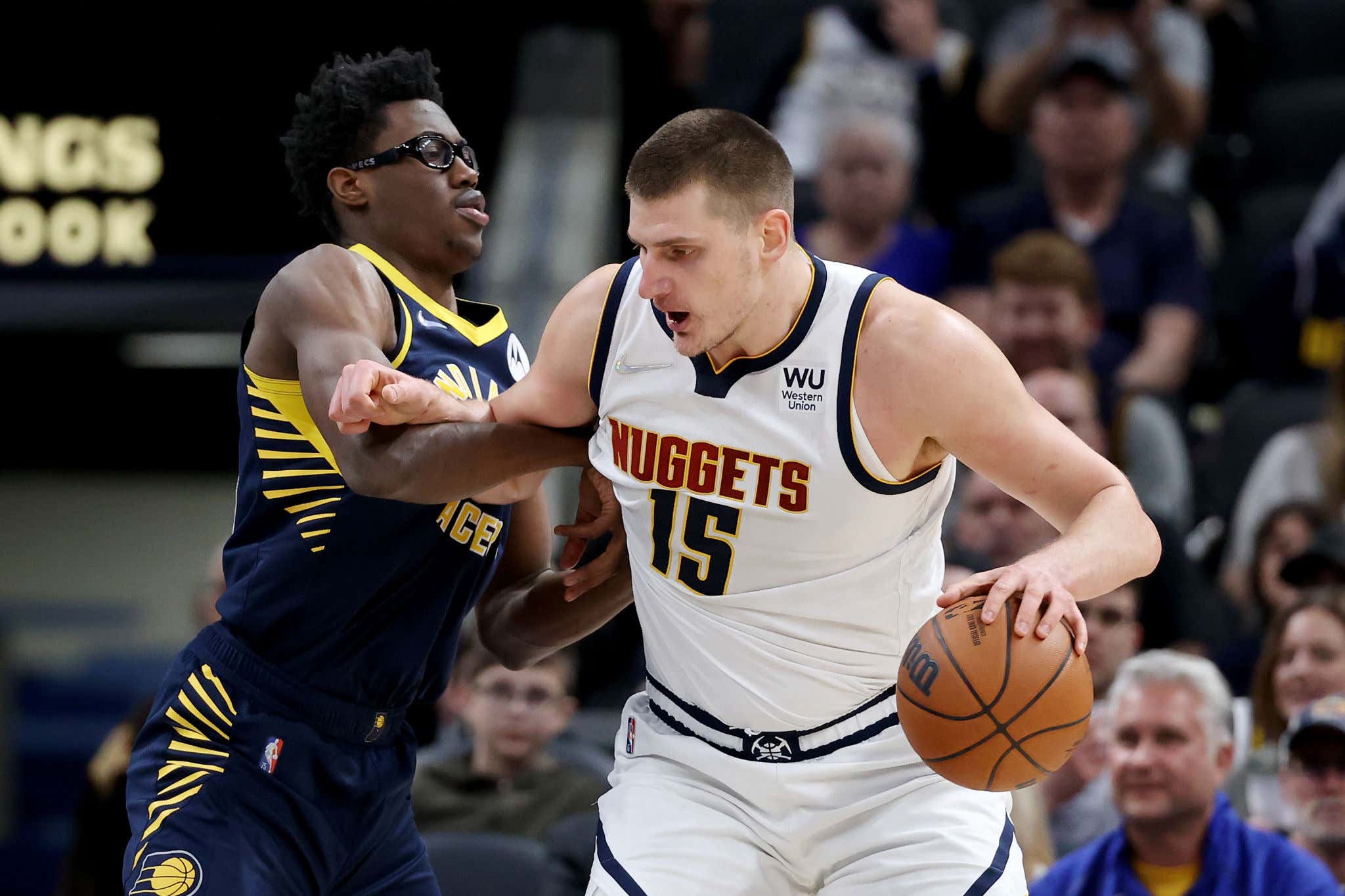 OK, so we've gotten to the point where Nikola Jokic (-152) surged ahead of Joel Embiid (+120) in the NBA MVP race. Not to take anything away from Jokic, seeing as how he's the reigning MVP and all, who entered tonight averaging 23, 14 and 8 with a league-leading 32.74 PER. And no, it wasn't really his fault from an individual performance standpoint that Denver almost BLEW IT against the Pacers before winning 125-118 this evening.

It's just that if we're using recency bias as a real determining factor in all this — which appears to be the case after Embiid got blocked by Giannis in the final seconds of last night's massive Bucks-Sixers showdown — I was juuuuust about ready to tell you that Jokic is NOT the MVP after what was going down.

The thing is, tonight was a huge opportunity to get a leg up on Utah for the fifth seed, and the Nuggets WERE UP 43-15 AFTER ONE QUARTER AND 50-19 IN THE SECOND!! Jokic had 19 points on 9-of-9 shooting, seven boards, five dimes, two assists and a block AT THE HALF.

What the actual fuck happened for Denver to almost blow this game? SHEESH. Their defense allowed the Pacers to score 38 points in each of the next two quarters, as that entire 31-point lead evaporated. Justin Anderson — who's played in 22 regular-season games from the 2019-20 season to now — Goga Bitadze, and rookie Austin Peay product Terry Taylor all scored in double figures for Indiana as part of the depleted squad's starting five. Raise your hand if you've heard of any of them before I just typed that out.

In situations like these, with so much on the line, how can it even get to such a point? Jokic picked up a technical foul amid the collapse, and he wound up committing seven turnovers to contribute to the cause.

HOWEVER, what happened in the end? Jokic, with some help from Bones Hyland and his 20 points off the bench, got it done when he had to, ending up with an impressive stat line of his own with 37 points, 13 rebounds and nine assists to fall just short of that coveted triple-double mark.

Joker has helped the Nuggets hang above the play-in bubble without Jamal Murray all season, and with Michael Porter Jr. missing significant action. That's nothing short of spectacular given the lack of star power elsewhere in Denver's rotation. Jokic's advocates will rightly argue that he helped the Nuggets get off the mat on Wednesday and avoid bottom-line defeat — even if the team just created a crisis for itself when it was entirely unnecessary. His leadership intangibles helped glue the team together when Indiana staged its valiant comeback.

All that said, we can't entirely discount the Nuggets' collapse when it comes to the race for MVP. Are we just going to forget that Joel Embiid willed the Sixers through a terribly dysfunctional time as Ben Simmons' toxic antics finally triggered a trade? Even before James Harden got to Philly, Embiid had the Sixers as one of the NBA's elite teams. And it's not like there's this massive disparity between the East and West like there used to be. We're seeing as much parity as I can recall in just about any season right now.

Embiid is averaging 31-12-4 on shooting splits of 49.2/41.2/80 in his last nine. It's not like he's having some epic downfall as the regular season comes to a close. But for now, when the lines reopen tomorrow, Jokic did just enough to justify maintaining his MVP lead.