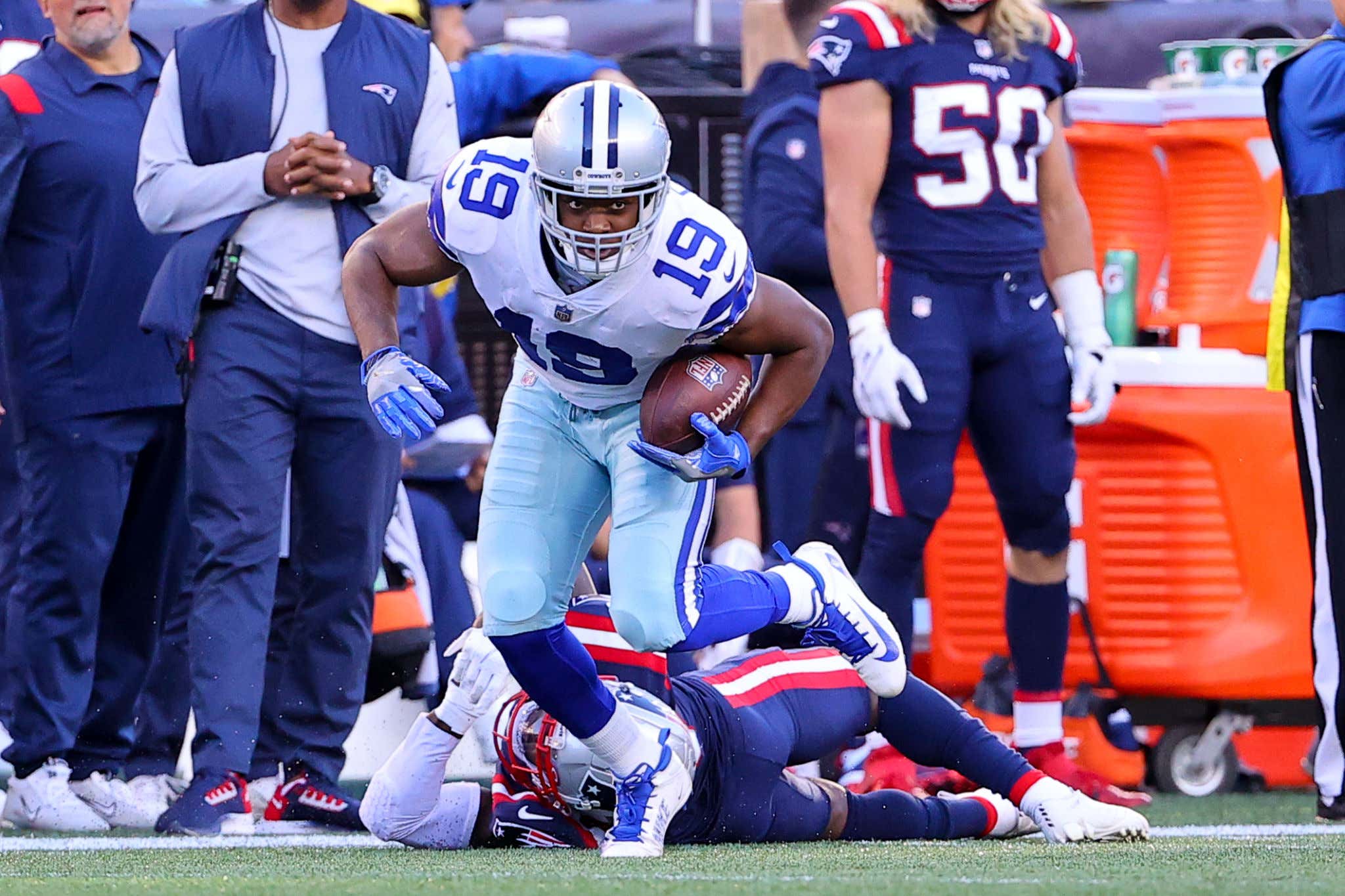 At the risk of jinxing another player into a year-long suspension by suggesting the Patriots have genuine interest in making him their next WR1,

there is no ignoring the reports that the Patriots are not only looking to get Amari Cooper when he's expected to get released next week, but that they'd be the perfect landing spot for him:

Boston.com - As a big-name receiver becomes available, one expert believes that the Patriots should pick up Cooper to help fill their need at the position.

“I think this has New England Patriots written all over it because they really need someone who has No. 1-wide receiver capability in the form of Amari Cooper,” ESPN NFL analyst Louis Riddick said on Sunday’s “SportsCenter.” …

Riddick believes the Patriots are the right team to help Cooper get back to playing at the Pro Bowl-level he played at before….

“New England usually pulls it out of people in a way that many other people aren’t able to. Look, for Mac Jones, this would be the perfect kind of weapon he needs on the outside to go along with a very strong running game and one of the best receiving tight ends in Hunter Henry.”

Look, if I didn't get at least a slight chub, if not outright Patriots Priapism, at the idea of Mac Jones paired up with a former Bama wideout who doesn't bet on NFL games, I'd be signing up for the treatments they advertise on sports radio. Cooper would be an upgrade from Nelson Agholor as the Pats X-receiver. (He was 20th in the league at passing snaps lined up on the boundary, with 443. Agholor was right behind him with 427.) They do have a history of getting more out of certain receivers who can grasp and fit into this offense than they've done elsewhere (Wes Welker, Deion Branch, David Patten, Danny Amendola). As well as quite a few who couldn't hack it nearly as well as they did for other teams (Doug Gabriel, Joey Galloway). So it's not hard to imagine Cooper being the perfect compliment to Kendrick Bourne, Jakobi Meyers and the tight ends the team needs for 2022, buying them time to draft and develop a long term hookup for Jones.

It's the other things Riddick mentioned that take the starch out of the idea. The $22 million he's due this year, for one. The fact that between the Cowboys and the Raiders, 100% of the teams Cooper had played for have decided he's good (in seven years he's made four Pro Bowls), just not worth-the-money good. He's the highest paid wideout in the game, and the No. 2 target on his own team. To Riddick's point on that we can circle back to the Tweet about the Dolphins and add that according to Over the Cap, they've got the third most cap space in the league at $52.4 million, while the Patriots are 18th, with $13.4 million. Even if Green Bay somehow found a way to make Aaron Rodgers the richest player in the game and franchise the No. 1 free agent in the league Davante Adams, the cap IS real. Miami has a huge advantage in that they don't have to ask Cooper to take a pay cut. The Pats do. A big one.

Or, failing that, they'd have to free up money by jettisoning cargo, like they did yesterday with the release of Kyle Van Noy. Or by sending in the payroll department's Shock Troops to make the numbers work with extensions:

Again, I don't have the first clue how that works. I get self-conscious adding up the scorecard at the turn. I usually just go hit the clubhouse for a beer and a leak and let my partner handle the math. But all that sounds pretty doable. Even more so if you find a trading partner for Agholor.

One thing to feel optimistic about though, is that this currently a team without a veteran superstar/franchise player who has to be your benchmark in terms of salary. They could never dare pay any other living soul more than Tom Brady. But if they bring in a guy like Cooper and he becomes your highest paid guy over the current top two, Matthew Judon and Hunter Henry, well then so be it. That's just business. Those guys got paid, he's getting paid. They have no legitimate beef. Doing what's best for the team.

And if Belichick truly does think he's "a true No. 1 for Jones," and his "perfect kind of weapon," he'll figure out the math. This has been the place where some WR's come to find success and others have failed. But it's also been the place where the truly great have recaptured their former glory (you don't need me to spell it out). If Cooper wants to get paid, he'll go somewhere like Miami. If he wants to be the guy who was good for 1,100 yards and a Pro Bowl every year, and go deep in the playoffs, he'll come to New England. It's going to be fascinating to see how it plays out.