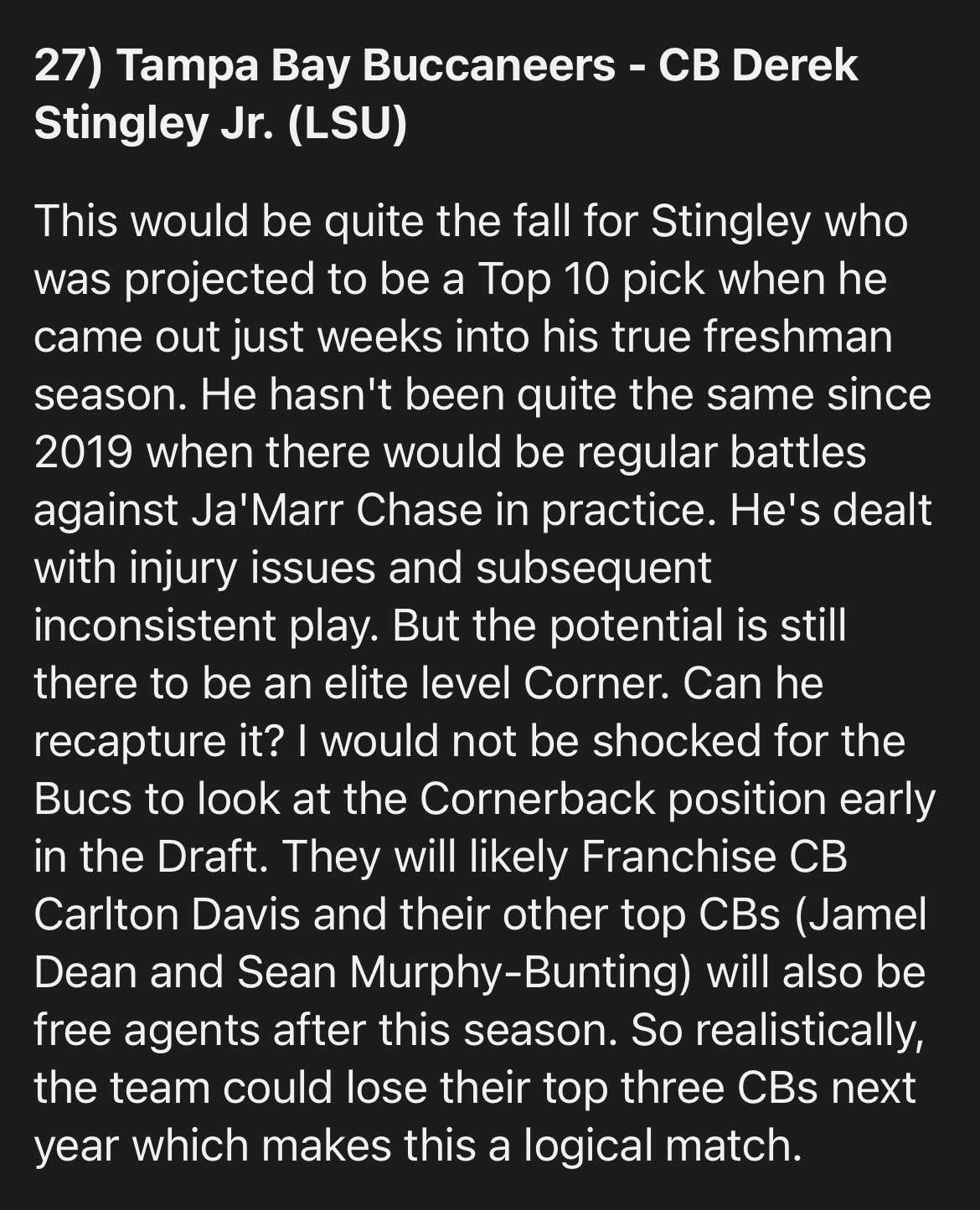 Yesterday our Junior Draft Analyst Steven Cheah released his Mock Draft 2.0 and one pick in particular caught my eye. I’m sure you’ve pieced together which one given the title of the blog and the screenshot above, but for those who still haven’t figured it out I’m talking about LSU CB Derek Stingley, Jr. free-falling conveniently to the Tampa Bay Bucs with the 27th overall pick. For those unaware, Steven is a die hard Bucs fan. Just one of those things that makes you go, “Huh.” And, also, “Huh?”

I had been planning on writing on Stingley at some point during this draft process. I wasn’t sure I wanted to follow up my Jordan Davis blog with one on Stingley, but after Cheah’s mock draft my hands were tied. Stingley falling outside of the top 10 wouldn’t shock me. Not because of anything he did necessarily, people just aren’t good at their jobs. The Dallas Cowboys, for example, have benefitted greatly from the incompetence of others with Micah Parsons and CeeDee Lamb falling into their lap the last two drafts. So Stingley falling out of the top 10 shouldn't be some grand surprise, 27th, however, would be lunacy.

Mel Kiper’s latest mock has Stingley going 12th to the Minnesota Vikings. McShay’s latest, albeit it 19 days ago, had the Jets nabbing him with their second selection in the top 10. PFF’s two most recent mocks from Steve Palazzolo and Sam Monson have him going seventh and fourth, respectively. Of those four mock drafts, Kiper’s is the most recent. It’s no coincidence Stingley is going the lowest in his as last season fades into the night and the Draft approaches. This happens every year with a handful of prospects rising and falling as we inch closer to Draft night. As less football is played and more 40-yard sprints in shorts are run, opinions shift a bit too drastically for my liking. Last year around this time a popular landing spot for Christian Barmore was the New England Patriots… with their first round pick. Come Draft weekend he was still on the board when the Patriots came back around to the podium in the second round.

Stingley did not compete at the Combine in Indianapolis last weekend. He got measured up but wont be running until the LSU Pro Day next month. I truly don’t give a shit about either of those events. I want to know why a guy with the highest level of play on tape is being knocked because he did it as a Freshman, got banged up as a Sophomore during the fake COVID year of college football, and then sorta coasted during his junior year so he didn’t tear something major and truly fuck up his draft stock. Especially since one of the knocks against Stingley in the first place is health. A football player might get hurt, can you believe it? I wouldn't draft anyone ever and lead the league in least amount of players on the injury report. If one of Stingley's legs completely fell off, yeah I would understand that being a red flag. Regular injuries every player is prone to by the simple nature of the sport they play? Jameson Williams could "slide" because he tore his ACL. If your GM takes a lesser WR prospect because Williams might miss a few September games of his rookie season then he's an unserious human in an undeserving position of power.

For my money, Derek Stingley, Jr.’s chip is as blue as any prospect in this class regardless of position. I love Sauce Gardner, I like a lot of the top corners in this class, none of them dominated like Stingley did for a Championship defense, all the while with an NFL pedigree coursing through his veins, and at a school that pumps out top flight secondary prospects every other year. Some people think same school scouting is lazy. Those people simply do not see the world for what it is. Taking LSU's #7 every year would yield successful results more often than not. Taking an offensive lineman from BC, Notre Dame or Wisconsin is one of those good ideas you hear about. Drafting a combo guard out of Kentucky in the NBA is a great way to find a good basketball player. Blue blood schools attract blue chip prospects that turn into All Pro talents at the professional level. That's just how this works. That’s not the end-all, be-all, but it shouldn’t be written off, either.

Stingley “falling” at this stage of the process feels like two things. For starters, it feels like Derwin James, Jr., slipping to the Chargers in 2018. At least that Draft had teams taking wild swings on quarterbacks. As a rookie, Derwin made All Pro at two positions. Last season, he was named to his second Pro Bowl. The two years in between he played five total games after suffering two separate injuries. Even knowing of the injuries in hindsight, James’ production has been so elite he’d be an easy top 10 pick in a redraft of that class. The second thing it feels like? A team in the 20s trying to crash his stock and land him without trading up. Perhaps a certain team at 21 looking to replace two top flight cornerbacks lost in the last calendar year. Who’s to say. All I know is a guy projected to go in the top 10 since he was a senior in high school suddenly dropping to the 20s feels… suspicious.

The Atlanta Falcons should be so lucky to pair Stingley with A.J. Terrell. The Panthers took Jaycee Horn eighth overall last year, they should strongly consider adding Stingley to that secondary. The New York teams have multiple top 10 picks, if they both pass on him twice they deserve to renew their leases in the pit of despair. If Stingley is still on the board when the clock starts for the Eagles they should be forced to fold the franchise if they pass on him with consecutive picks. Especially since the team lurking behind the Eagles is… the Los Angeles Chargers, who should very much pounce on adding Stingley to a secondary that features James and Asante Samuel, Jr. I see great reasons for every team to make Stingley their first round pick, including Jacksonville first overall. I haven't found many, if any, reasons to pass on him. Make your life easier, don't overthink it, draft Derek Stingley, Jr.