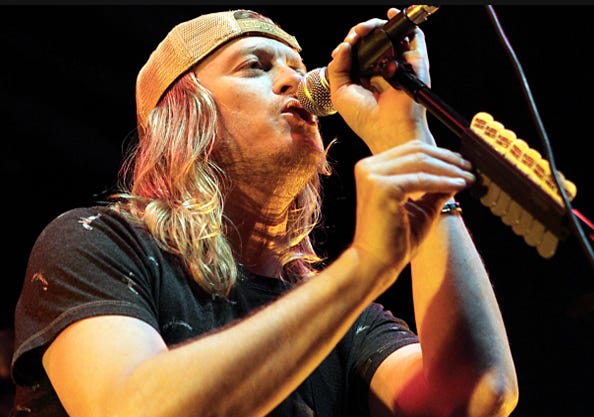 LoudWire - Puddle of Mudd frontman Wes Scantlin continues to run afoul of the law. For the second time in under a month, the vocalist was arrested for driving under the influence. Just last month, Scantlin was busted for DWI in Minnesota and reportedly blew four times the legal limit after leading police on a high-speed chase. Now comes word from TMZ that Scantlin was arrested early Wednesday morning (Aug. 5) in South Dakota. According to reports, police determined that Scantlin was driving under the influence. He also was cited for possession of marijuana. The vocalist was released on $500 bail and performed in South Dakota last night.

At this point you can’t even knock his hustle. Two DWIs in two weeks is quite impressive. It was just a couple of weeks ago he was popped for DWI after he blew a .310 and now he’s back at it. A little time in jail isn’t going to slow Wes Scantlin down, no no no. He’s the bad boy of rock n roll, just without the fame, fortune, or any hit songs from the last 15 years. Doesn’t matter to him though. He has heart and would never let down his legions of fans, so he still performed that very night. A little time in the clink isn’t going to keep Puddle of Mudd from cashing those hundred dollar paychecks for playing a backroom at a bar in South Dakota. I assume it’s like how kids get free drinks if they order off the children’s menu, he shows up and you get a free rendition of Blurry if you order the mozzarella sticks. But hey, that’s the grind of the rockstar life. Can’t wait to see where he gets his next DWI.

PS: Apparently the dude lip syncs his concerts now because he’s all fucked up and can’t sing. Also he has crazy breakdowns on stage wherever he goes. That’s what I learned from doing some blog research. Also learned his a domestic abuser, was arrested for riding the luggage carrousel at an airport, owes a ton of back taxes, and all in all is just a real gem.