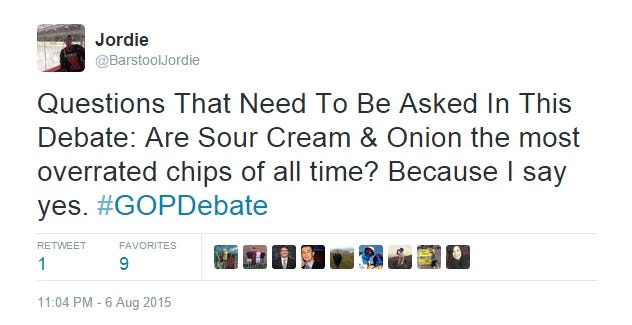 So I sent this tweet out last night during the debate and it was met with a very mixed response to say the least. Plenty of people calling me an idiot. Plenty of people saying I should be fired. And plenty of heroes who weren’t afraid to stray away from popular opinion and agree with me. I really don’t know how or why Sour Cream & Onion became such a staple flavor in the potato chip game, but I’m getting pretty damn sick of it. And someone needs to step up and do something about it because the fact of the matter is, it’s just not an overly great chip. There are people in this world who have the audacity to call it the greatest chip in the biz right now and that’s borderline lunacy.

Now trust me, I’m not saying that Sour Cream & Onion is a bad chip. No, not at all. If you put a bag in front of me, I’ll gladly indulge in a handful or two. But that’s where I draw the line. And that’s how I think we should all judge a flavor of chip. On whether or not you can down an entire Family Size bag on your own in one sitting without feeling any shame and/or regret. Sour Cream & Onion simply does not pass that test. Not only do they get old after a couple handfuls, but you also have to worry about Sour Cream & Onion breath as well. Last time I checked, there are 365 days in a year. For the majority of those days, I know that there is a 0% chance that I will be kissing a girl. But I’m an optimist at heart and still like to leave the door open for opportunity. If you eat a bag of Sour Cream & Onion chips, you’re a healthy scratch for at least the rest of the week. And if you’re a real person who has to go to a real job with a real boss, you can’t be getting Sour Cream & Onion chips for work because what if you have to go into a meeting after and take everyone out with your rancid breath?

All I’m saying is that I can think of so many flavors right off the top of my head that are better than Sour Cream & Onion. Old Bay, Salt & Vinegar, BBQ, Salt & Pepper (grossly underrated btw), Garden Salsa, the majority of those new crazy flavors that Lay’s has been putting out, anything that is Kettle Cooked, and so on. Sour Cream & Onion is good, but it is far from great. And I’m just sick and tired of everyone acting like it’s an elite potato chip. Sour Cream & Onion are the Joe Flacco’s of the potato chip world. And that’s the bottom line.