I can't even lie, this is one of my favorite videos. Why? Because it's unintentionally hilarious. There's a good chance Joe Burrow legit thinks they don't know who he is. Hey let me go introduce myself real quick like it's a networking event an my name tag is falling off. We've all been there. Those suck. This just happens to be the Super Bowl and Burrow's name tag is quite literally sewed on his jersey. I also keep laughing because it somewhat implies that Joe Burrow just forgot all about scouting. The Rams just showed up like woah who is this guy? Number 9? Don't know one thing about him!

The image of him reaching his hand out to shake Von Miller's hand is just fucking hilarious. It's the only way I can put it. 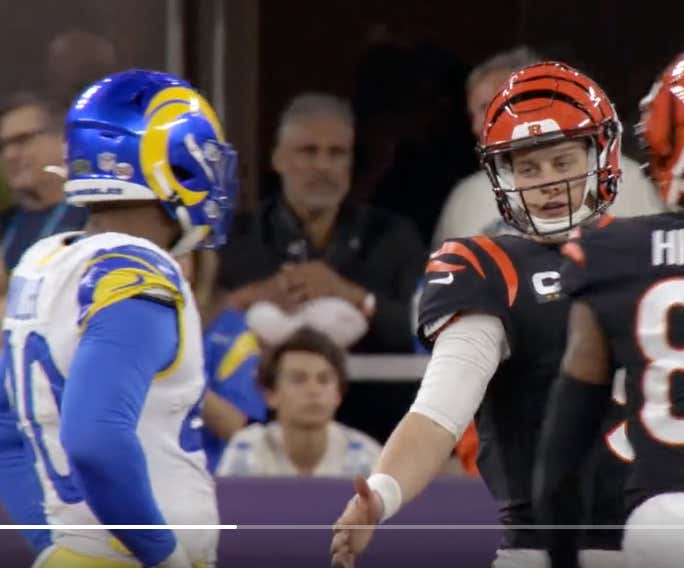 It might just be great mental warfare. Look at Von Miller in that still shot. He's staring right at that hand like is this dude serious. Might have threw him off a second and actually let the offensive line block him for a play. I really think the fact his name is Joe plays into it the most. Just the most generic guy name out there. Just works way more than anything else.

Can we all agree on one thing though? Let's just wait until we all turn on Burrow. Right now he might be the most beloved star in the sport. Maybe in any sport, up there with like Nikola Jokic. People are going to start hating him way more because of this stuff. But Burrow is fun and good. Pretty good combo. We need entertaining personalities in sports and whether it's him walking in dressed like Namath or doing shit like this, just let him. We can hate him in 5 years.