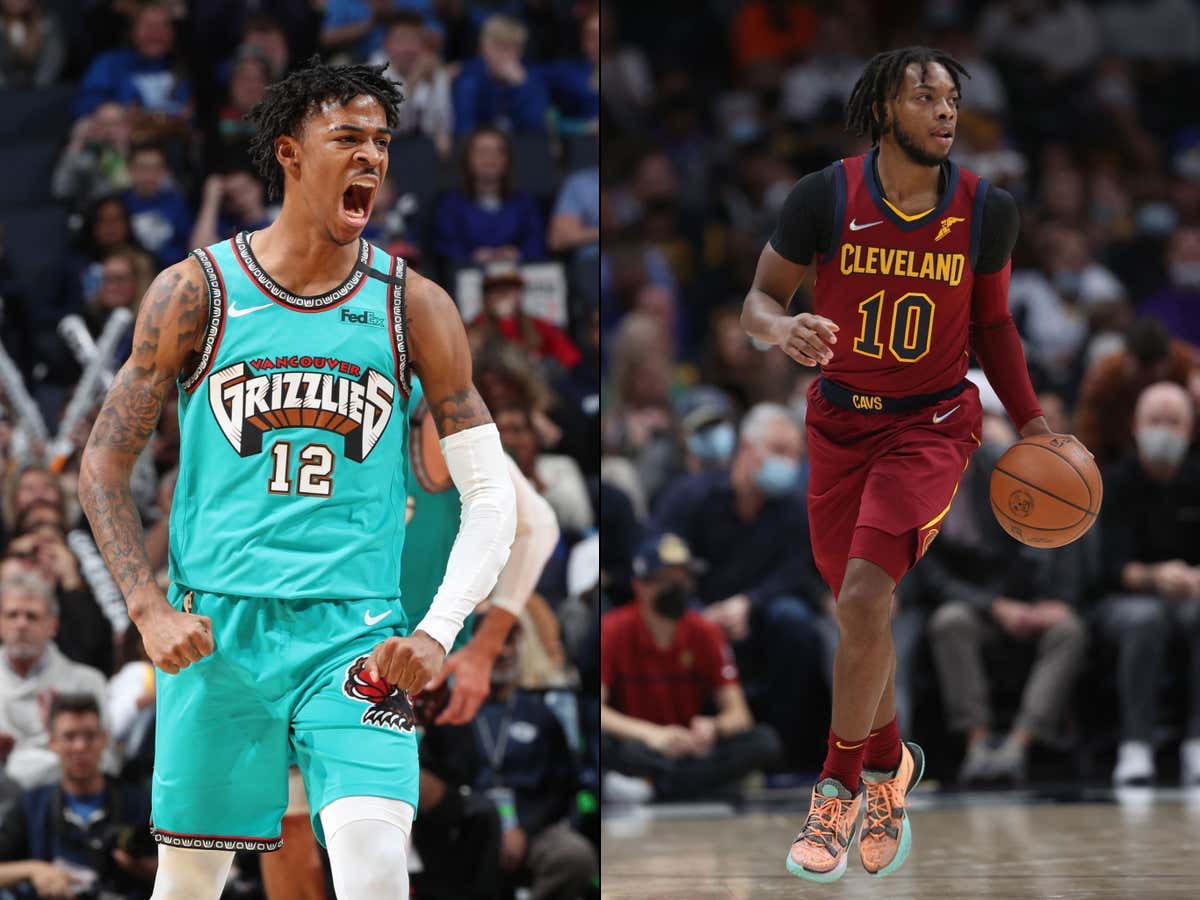 By no means would I say we're experiencing a normal NBA season. That's honestly been the case for these last few years. Every day we wake up and wait for the Shams/Woj tweet to tell us another player is entering the health and safety protocols. Games are being postponed, teams are scrambling just to sign 10 Day guys so that they can actually play games. It's madness.

But one thing I would say that's unique about this season in a positive way is how much new blood is busting on the scene. Young players around the league are taking massive leaps. It could be big market or small market teams, it doesn't really matter. If you've watched this season I think you'd agree one of the best parts about the first half has been watching the next generation develop and flourish. That led me to start thinking about the All Star Game. With voting now officially open, it really feels like we're about to get a whole bunch of first time All Stars, and I find that pretty cool. You have guys like Kyrie that have missed the first 35 games of their season and Ben Simmons that hasn't touched the floor yet either. That's why this tweet was very funny

But you can look in each conference and find a handful of guys that are absolutely deserving. Some will probably lose out because at the end of the day it's a popularity contest, but it would not surprise me in the least if some of the following players finally broke through. Obviously things could get weird if guys are somehow in the protocols and the league needs replacement players, but that's obviously impossible to redict Let's go by conference because that's easier

By now, you should know that the Cavs are not a fluke. Whether you look at their record (21-16), their East leading point differential (+5.3), their 13th ranked offense, their 3rd ranked defense, or even their 4th ranked net rating, it all tells the same story. The Cavs are flat out good. A huge part of that equation is the Year 3 leap by Darius Garland. Career highs in points, FG%, 3PM, rebounds, assists, and steals, it's become the norm for Garland to find himself being the best player on the floor on any given night. Not bad for a 21 year old if you ask me. When you've had the success in the first half like the Cavs have had, that usually gets rewarded. You'll see some other Cavs names in this blog that I also feel will be deserving, but I'm at the point where I'll be mad online if Garland gets snubbed and I'm not even a Cavs fan. I'm just someone who has watched his season, and he's playing at an All Star level. I certainly hope there isn't anyone out there that would debate that. I guess maybe if you haven't watched a ton of Cavs games you might not be aware, but I told you weeks ago to start paying attention to what they are doing. Considering the guard slots in the East are WIDE OPEN compared to previous years, there's no excuse to not have Garland included, especially if they continue their strong play from now until the deadline.

The other Cav that is making quite the case for himself is Jarrett Allen. The 23 year old trails Joel Embiid by just 0.1 rebounds (currently 10th), he has the 3rd best +/- of any regular rotation center trailing only Gobert and Jokic, and he's 4th in FG%. Allen is just 1 of 12 players currently in the league that is averaging at least 10 points and 10 rebounds, and one of those is Bam who has only played 18 games. You could make the case he's having one of the better big man seasons that you are most definitely not even hearing about. Last year saw 2 centers make the East roster (Embiid, Vucevic), and I think we can agree Embiid is a lock. Could Allen grab that other spot? He's been better than Vuc this season in my opinion. I really think you could make the case that Allen has been the 2nd best center in the East so far after Embiid. That might sound crazy, but not to Cavs fans who have seen every game.

You want to talk about new blood crashing the All Star party? You have to mention LaMelo. Talk about living up to the hype. He won ROY and has come back and been even better. He's 4th among guards in the East in assists, and here is the list of players in the conference that are averaging at least 19/7 at the guard spot

That's it. That's the entire list. Not to mention the Hornets are flirting with a top 6 seed at the moment and they own the 3rd best offense in the entire NBA as of the writing of this blog. Why do we think that is?

The Raptors record is not what I would call good, but that's not on FVV. He's been nails. No guard in the East makes more threes per game (3.5) and he's shooting 40% on insane volume (8.8 3PA) which also leads the conference. He also finds himself in the top 10 in steals which I found surprising. Did you know he's tied with Jrue Holiday? I didn't until I just looked it up for the sake of this blog. I know the last few years have been a bit of a shit show for the Raptors, but the one constant has been the solid play of FVV. It would be a pretty cool chapter in his story for him to finally make an All Star team, and it's hard to say the production hasn't been there.

If you're looking for a potential wing to crack their first All Star game, I think Bridges is a decent choice. He's another player that has taken a massive leap this season. Career highs in points, 3PM, rebounds, assists, and steals. The forward spot is maybe the hardest to predict in the East in my opinion. Guys like Giannis/Durant/DeRozan/Tatum are most likely locks (LaVine was a guard last year so that's what I count him as). Guys like Jaylen Brown and Julius Randle I think could see their spots swapped. Sabonis probably makes it as one of the other reserve forwards. There just aren't a ton of spots for a new guy to break through, but of the first year guys, Bridges is having the best forward season so far. Maybe we see more forwards in the reserve group than guards like we had last year, and if that's the case I could see Bridges breaking through.

Let me be as clear as humanly possible. If Ja Morant is not an All Star this season then there is no point in even having All Stars. Not only is his team comfortably in the 4 seed, but he's 4th in scoring among guards in the West. If you look at guys averaging at least 24 points and at least 6 assists in the West at the guard spot, here is the list

Pretty good list! I know the guard position is loaded in the West, but I think there could be at least 2-3 spots that could be up for grabs. Depends on if you think the Suns backcourt will both make it this year. I could see Dame's and Conley's spots from last year being up for grabs and I cannot think of any other guard that should have one of those spots over Morant. Dame despite his down year will probably make it, so really we're looking at Conley.

The Wolves are another team that has been much better than people thought to start the year. Sure they are 4 games under .500, but they've been gutted with covid shit. They still find themselves in the play in and even competing for a top 6 seed, and the development of Anthony Edwards is a big part of the reason why. Much like LaMelo, he's coming off an awesome rookie year and has gotten even better. A career high in points, FG%. 3PM, rebounds, assists, steals and blocks. I think forward is the biggest spot for a new guy to break in with AD/George/Zion all having their spots up for grabs mostly due to games played. Then there's Kawhi's spot who hasn't played all year. I wonder if we'll see Edwards be counted as a guard or forward, because sometimes that gets a little wonky when it comes to All Star voting.

There's no way we only see one Warrior on the All Star team. Draymond might get the nod due to his reputation, but you could make the case that Wiggins is just as deserving if not more so. He's sneaky been pretty awesome since getting to GS, and he's currently experiencing his career best in FG%, 3PM, and 3P%. His defense is much improved as well. It felt like people thought his efficiency was maybe a fluke last year and all he's done is take it up a notch. There must be something about that Warriors system because a guy that was a career 44/32% shooter before he got there has been living at 47.8/39% in his 114 games as a Warrior. It's not a fluke, Wiggins has played his role fairly well andit wouldn't shock me if he gets rewarded for it.

As you can see, things are a little more open in the East which makes sense because so far this season that's been the better and deeper conference. Part of that is because all these new guys are taking big time leaps and playing at an All Star level. Between games played, guys sitting out an entire year, and some down years from previous All Star vets, there really is a good chance we see a handful of new blood. I find that to be a good thing. There's nothing wrong with giving the next generation of talent their moment in the sun, especially when their quality of play is deserving of it.