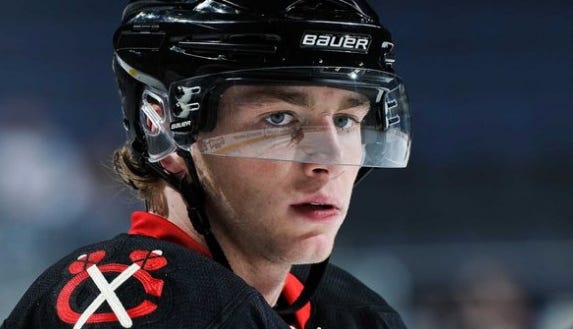 (Source) Patrick Kane, the star player of the Chicago Blackhawks who grew up in South Buffalo, is the target of a rape investigation by Hamburg police for an incident that occurred over the last weekend, two law enforcement sources have told The Buffalo News. A local woman has accused Kane of a sexual assault, the sources said.

The law enforcement sources said that the woman went to a hospital and that tests using a rape kit were performed. Kane, 26, has a home in Hamburg. He has not been charged with any crime. The News also learned from a law enforcement official that at least one other local police agency has been asked to assist with the investigation, and the other police agency was told that the investigation involves an allegation against Kane. The agency was told that Roseanne Johnson, chief of the Erie County District Attorney’s Special Victims Bureau, is the prosecutor assigned to the case.

On Wednesday, both Hamburg Police Chief Gregory G. Wickett and the Erie County District Attorney Frank A. Sedita III said they could neither confirm nor deny the existence of the investigation. Paul J. Cambria Jr., a defense lawyer who represented Kane in the past, declined to comment Thursday. When contacted Wednesday, Cambria said: “I have nothing to say.”

Cambria represented Kane in a 2009 case involving an altercation with a Buffalo cabdriver. In that case, Kane and his cousin pleaded to disorderly conduct, a noncriminal violation, after the two were accused of assaulting a taxi driver in his cab on the morning of Aug. 9, 2009. The National Hockey League said Thursday it was aware of the police investigation. “We are aware of the police investigation and are following developments,” said the NHL’s Frank Brown, group vice president of communications. The News went to Kane’s Hamburg home Wednesday morning to seek his comment but was denied access by a man at the house who did not identify himself.  A reporter asked the same man working at the home if he could leave a card to speak with Kane but was denied and told to leave the property. Two sources said Hamburg police officials have forbidden their officers and detectives from publicly discussing the investigation.

Well there is the confirmed story. Alright, let’s try to unpack this as neatly as possible without being total idiots here, myself included.

1) Patrick Kane is being investigated for rape, that doesn’t mean he raped someone, which is something all of twitter will tell you, but it’s still not good. Being caught in a situation where charges like this are even a possibility is at best poor judgement and worst a very very serious crime. Anyone who says Patrick Kane is a rapist at this point in time is flat out wrong, but to sit here and say this is nothing and I’m not worried would be disingenuous to say the least.

2) In the same “Patrick Kane is innocent until proven guilty” vein, anyone who shouts “she is just looking for money” or “crying rape” is a moron of the highest order. If you want to wait for the facts to come out then that goes for both sides. People who call Patrick Kane a rapist are no different then people who say this was extortion or she is simply looking for a pay day.

3) People will make jokes and call you a scumbag for rooting for a team that has a player investigated for rape and guess what? Suck it up. This is what happens in sports, this is what happens in fandom. Another team’s player does something wrong or is accused of a crime and everyone jumps on, myself included. To then get upset when the roles are reversed would make you a hypocrite. Hopefully Patrick Kane didn’t rape anyone because rape is a heinous crime, and even if it is proven he didn’t his name will still be attached to that word and there is nothing that you can do about it when fighting with twitter trolls. People will bash us just like we bash other teams, dems da breaks. Again, suck it up.

4) Here is the official statement from the Hawks

“We are aware of the matter and are in the process of gathering information. It would be inappropriate to comment further at this time,” the statement read.

5) I’m going to need the Cubs to sweep the Giants this weekend.