First domino of many to come for the White Sox. Kendall Graveman is a perfectly good MLB reliever that any team would love to have in their pen in some capacity. Last year he even anchored the closer's role on a good Mariners team. There's not much to nit pick about this deal, as it's only $8MM AAV, but if anyone feels inclined to nit pick, I'm not in love with the 3 guaranteed years, as there is a lot of variance in most relievers' performances year over year . Butttt.... what the fuck ever. Graveman was a stud last year:

…but Graveman isn't signing with Chicago to be some high leverage back end guy, and that's fine as that spot is reserved for Liam Hendriks, who may be the best reliever in all of baseball.

Graveman is a failed starter turned reliever that has found his niche in a big way last year. The chart below shows how well he's learned to limit quality contact from hitters: 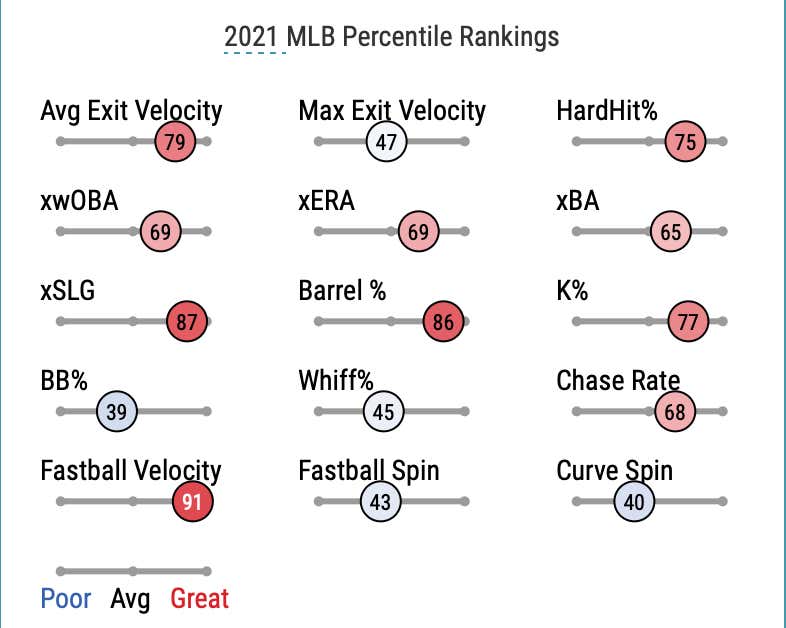 That's the kinda shit you love to see out of a middle reliever. Weak contact followed by more weak contact. Hopefully that stays the course in Chicago.

Assuming Kimbrel gets dealt the White Sox now have a theoretical stud setup guy who can do the following:

1. Command his fucking brain while not melting down because he's not getting a clean 9th inning.

If you don't know what/who I'm talking about there, I'm talking about Craig Kimbrel, who stunk on the Sox. That said if Kimbrel does find his way back to the south side in 2022, his filthy shit is still there, so who knows, maybe he flips a switch.

I can't wait for Ethan Katz to sink his meaty paws into Graveman. Command issues can/do exist for him based on his mediocre walk rate, but the pure shit is all there. We like this signing. We really like this signing.

Beyond that, I still want Tepera back and think he'd be a perfect 6th/7th inning option in front of Graveman. Graveman (probably) replaces Kimbrel. Now we need someone to replace the reliever version of Kopech and I would love for that to be Tepera. He's just good. Nothing sexy about his pitching arsenal, but he's just good. Simple as that. I just hope the Graveman signing didn't set a market that would be too pricey for a Tepera/White Sox reunion.

Now it's time to replace/re-sign Rodon, get a RF and a 2B. Lots of work to do, but this is a nice start to the White Sox hot stove season. I think Conforto makes a lot of sense in many ways, but still would love for them to make a major splash. We'll see if Reinsdorf is thinking the same way as he ain't getting any younger.

Keep the ball moving. Let's get more of the 2022 and beyond roster set before the CBA expires in a week. Conforto? Semien? Idk just go big game hunting ONE TIME for us….