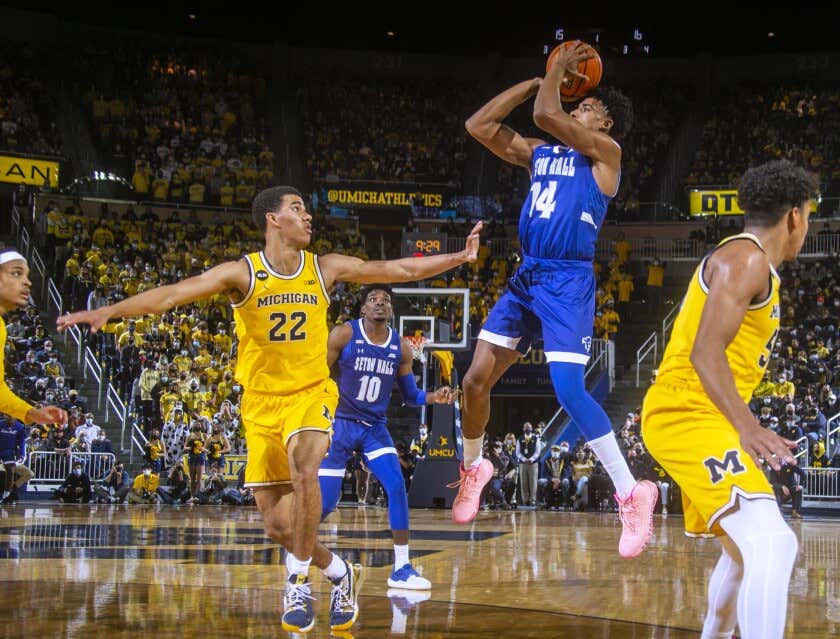 I probably shouldn’t have ended yesterday‘s blog with “Now beat Seton Hall.” That was the kiss of death.

Michigan suffered their first loss of the season last night against Seton Hall. It was a 67-65 defeat at home in Crisler Center. It was a game that Michigan had in hand the whole way through. They led by 11 points relatively late in the second half and couldn’t close it out. Am I frustrated by that? Yeah, of course. I wouldn’t say I like losing. Am I concerned? Not yet. As talented as this team is, there are some early season question marks, mainly pertaining to outside shooting. Juwan Howard teams run excellent sets. They move the ball well, and they get good looks. Last year when they had good looks, they often made them. So far this year, they have not. They don’t have an Isaiah Livers or a Chaundee Brown who can shoot them out of slumps. That will be an issue that will potentially plague them for a large majority of the season. I’m confident that water will find its level in some capacity. There is absolutely no way Caleb Houstan will go 1 for 9 in every game the rest of the season. Though the season is still in its infantile stage, it’s fair to say that Michigan will get every team's best shot. They’re going to have a lot of haymakers thrown at them. And in some instances, like last night, those haymakers will be landed.

Last year this was a program that was predicted to finish sixth in the Big Ten. I still maintain the belief that it was a tremendous oversight by the media. I understand that the Big Ten was loaded last year, but I remember thinking that was a Michigan team that was going to be excellent. I have a hard time saying that Michigan team “snuck up” on people but I do think that they surprised some people with just how talented they were. That will not be the case this year. This was the team that was picked by almost everybody to win the Big Ten and potentially make a run to Final Four. It’s a team with a ton of talent and high expectations, and they are expectations that I know Juwan Howard has looked forward to embracing. Last night’s loss wasn’t fun; no loss ever is. But it’s fair to say that this Michigan team will be battle-tested all year, and battle-tested teams will win in March. It’ll be a challenge, but my confidence level in them remains high.