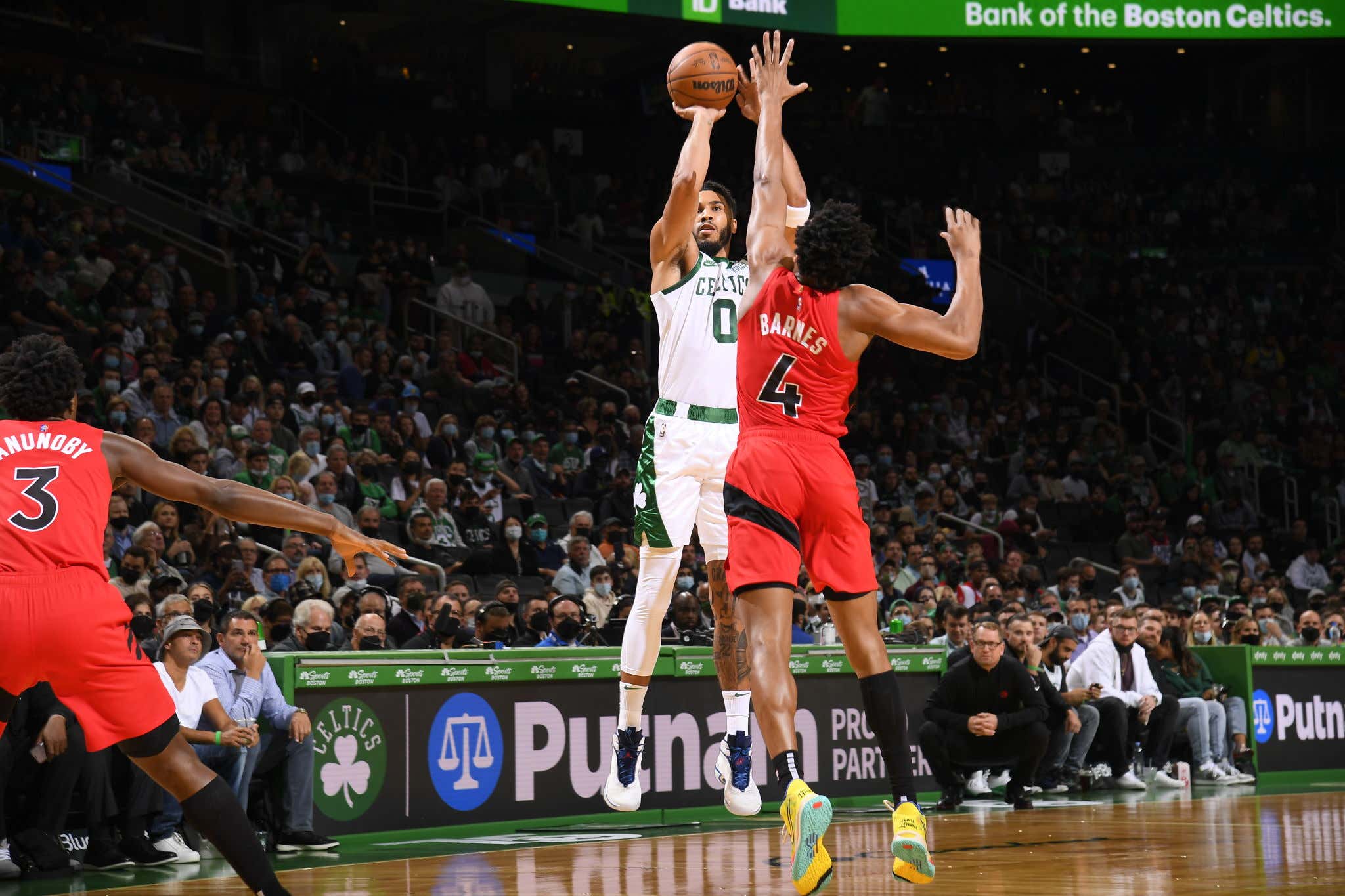 It was 19 days ago that the Toronto Raptors came into Boston and kicked the absolute shit out of the Celtics in their home opener to the tune of a 115-83 score. It was a complete meltdown over the final 24 minutes where we saw a 4 point game at the break turn into a 32 point ass kicking. Postgame, Ime Udoka pretty much said what we all felt

Since that moment, it's been up and down. We've continued to see games where the Celts lose in brutal fashion, but others where we're starting to see their potential. The one thing that hasn't happened is another ass kicking like that home opener, but we're still waiting for this team to actually win a game at home. In fact, the Pelicans are the only other team in the NBA that has yet to win on their own floor. I don't know much, but I sure as shit know that if you're going to talk about the Celts you never want to find yourself in the same sentence as the Pelicans. On the flip side, the Raptors are just 1 of 2 teams that are currently undefeated on the road (4-0).

Which brings us to tonight. Things will obviously look a little different tonight compared to the opener since Jaylen Brown is out and the Raptors now have Pascal Siakam back after he missed the first game. The Celts coming off their gut punch loss against Luka and the Mavs, and the Raptors coming off back to back losses to the Cavs and Nets, one of which they lost on a missed Scottie Barnes tip at the buzzer. The point is, this is yet another test for a Celtics team that is desperately trying to climb out of this early season hole they put themselves in, and the Raptors are looking to be a little bit better than maybe most people thought.

I am very intrigued to see how they look. Not just how they start, but if they can play a full 48 minutes. It's one thing to talk about it, it's another thing to actually be about it. Now without Jaylen, things are obviously going to be a little tougher. Granted he didn't do much in the first game (3-13), but obviously defenses have to account for him when he's on the floor. Now, that's not the case so you better prepare yourself for Jayson Tatum to be doubled all night long. The Raptors can now throw OG/Barnes/Siakam at him and dare the others to come through. That's always going to make me a little nervous considering Tatum is going to be surrounded by mostly non shooters. Against the Mavs we saw him make the right pass on multiple occasions, yet as a team the Celts finished just 1-12 on wide open threes.

This means that guys like Romeo and Nesmith are going to have to actually show up. They cannot have another outing like we saw against the Mavs. Pritchard is going to have to find a way to get back to making shots. I just don't think you can rely on the offense of Scroder/Smart, and the Mavs game is a good example why. They scored just 11 points in that first quarter and were climbing uphill the rest of the night.

The first matchup saw the Raptors simply play harder. They didn't shoot all that well (42/28%), but they were way more aggressive. Precious Achiuwa dominated to the tune of 15/15. It was by far his best game of the season and almost all his points came off hustle plays. The same is true of Scottie Barnes. He killed this team mostly because he played harder than his opponent. As a team, the Raptors finished with 21 OREB (!!!!). Rebounding is more effort than anything else so I'm looking forward to how the Celts approach this. Will we see everyone crash the glass? We're starting to see the Celts switch less so that should help in theory, but it needs to be a collective effort.

At some point, if the Celts are actually going to turn things around they need to graduate from moral victories to actual victories. This next stretch of TOR/MIL/CLE/CLE/ATL/LAL is going to tell us a lot about what type of team this is. They are showing signs of improving (especially defensively), but at the end of the day they need to start stacking wins. Just go look at their December schedule and you'll see why. Given how this Raptors embarrassed the Celts on their home floor the first time they played, I think the type of performance we see tonight will tell us a lot. Remember, head to head matchups are always going to matter, especially when it comes to teams within your division who you could be in a potential seedings race with, so even though this is an early November game it sure as shit matters.

First and foremost, the Celts have to keep their TOs in check because the Raptors will absolutely make you pay in transition. They average the 4th most transition points a night. Overall defensively, they give up the 4th fewest points a night and the second fewest among Eastern Conference teams. For a team that has TO issues at times and then also struggles to make an open shot, that's a little concerning.

If we're being honest, as important as this game might be for their record/standings, I think it's also pretty important from a mentality standpoint. The Raptors came in and punched this team in the mouth. Completely embarrassed them on their own floor in front of their own fans. If that doesn't have you fired up and ready to play one of the best games of your season, what else could?