The aftermath of the Heat-Nuggets pushing and shoving match from last night has been nothing but pure comedy with twists and turns that I never saw coming. First, there's the picture above. The Miami Heat looking like a parent walked in on a group of 15-year olds smoking the Devil's lettuce. Now apparently that John Taffer looking individual is not a security guard but rather the Miami Heat's VP of Basketball Operations, so I get Jimmy Butler not wanting to trample over him in order to punch Nikola Jokic in the shin. But it doesn't make the picture any less funny. Look at Lowry and Bam, look at their eyes, their hearts are not in this fight in the slightest. These guys were just on the court within arm's reach not five minutes ago. If you wanted to swing then swing. Jimmy Butler did the opposite until Jokic was safely on the bench.

But the real comedy took place, as it usually does, online. Marcus Morris had to interject. They're twins, if one starts a fight the other has to get in the mix that's just a law of the universe.

And while you don't make a lot of money betting against the Morris twins when it comes to fisticuffs, I've got them at +50000 against the trio of Serbians. The Jokic brothers do not fuck around. The Nuggets don't even sit them remotely near the court out of both fear and respect for their combine powers.

They're first team "With The Shits" all stars. I'd rather fight the Sun than the Jokic brothers. Especially after seeing how they tweet. Much like James Harden, they've never used the internet before. They have no need for it. That is, until they catch wind that someone is threatening baby bro. Then they'll create a Twitter account just to make sure their threats are heard loud and clear.

Remember the early days of Twitter when literally anything in the world would happen and a parody account would pop up two minutes later? That's what I thought this was until a Nuggets beat reporter confirmed that, no no, this was a direct threat straight from the thumbs of the Jokics.

And now the pieces start to fall into place. Of course it's them. Someone who has never used Twitter before certainly has no time to upload a profile picture, and they have even less time to learn that one reply is all that's necessary. Tweeting the same message both in reply and also standalone is big time "never connected to the internet" behavior and one that should be taken extremely seriously. 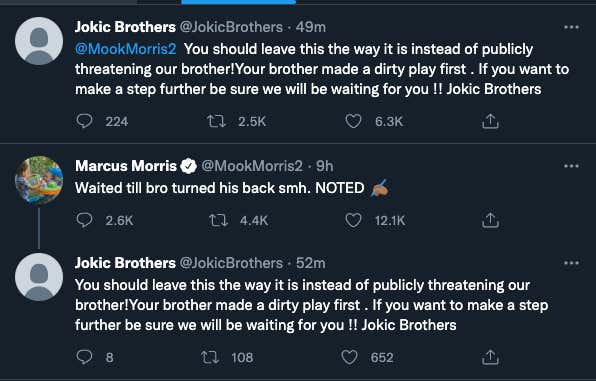 Like I said I don't like picking against the Morris twins in an altercation of any kind, but I also have to call it how I see it. Wouldn't surprise me if the Jokic brothers got 10-day contracts just so they could be on the bench the next time either twin was suiting up against the Nuggets. Either that or Denver's gonna have them sitting in the same seats as Jordan Love's family.