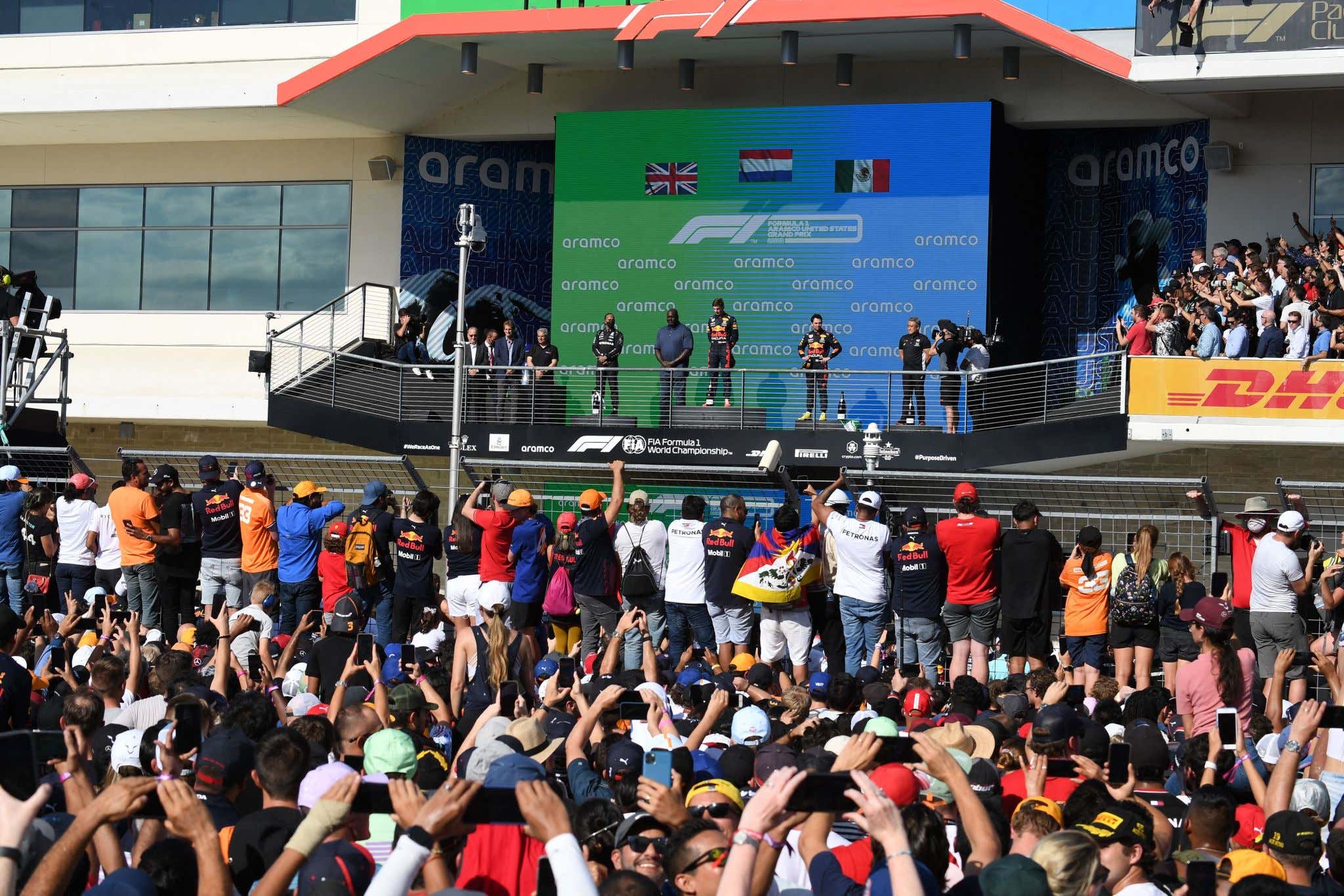 The last year has been one of the most transformative years in the history of Formula One in America. With more time than ever at home to watch content, Netflix's hit show "Drive to Survive" has helped so many Americans fall in love with all of the drama that surrounds fast cars going around in circles for two hours on Sundays. While F1 will never compete with any the popularity of the major four sports in America or even really NASCAR, this weekend proved that there is a very bright future for the sport here in the states. Just look at the crowds and atmosphere at the track today.

America is becoming a country that loves F1 and they were treated to some incredible racing today on the track between Max Verstappen and Lewis Hamilton. Coming into this race, there were only six races left in the season and only six points separating Verstappen from Hamilton in the championship battle.

After yesterday's qualifying, Verstappen and Hamilton were starting today's race side by side on the front row of the grid. Hamilton got off to an incredible start off the line and despite Verstappen's best efforts to come over and cover him off, Hamilton took the lead. No crazy fireworks, just a great start by Hamilton to pull ahead and an average start by Verstappen, which left him staring at the rear wing of Hamilton for the first stint of the race. Verstappen was easily holding pace with Hamilton, but both drivers were in the long game now which would be decided by race strategy.

On lap ten, Verstappen pitted from second place, several laps before Hamilton and when Hamilton finally pitted on lap fourteen for new tyres he came out several seconds behind Verstappen. Verstappen was now in control of the race, it was just a question of whether he could off Hamilton who was on fresher tyres.

While Verstappen and Hamilton were battling up front, there was also another incredible battle going on between the Ferrari's and McLaren cars behind them. Carlos Sainz had the tough task of trying to hold off Daniel Ricciardo and Lando Norris double-teaming him. Ricciardo ended up on top of the two and came out ahead. This is the wheel-to-wheel racing we love to see and despite it not being for the lead, it was a super important position to secure in the battle between the two teams for third place in the constructor's championship. Mega.

By the time of the final round of pit stops, Verstappen once again dove into the pits way earlier than Hamilton for new tyres. This left him holding on for dear life with his tyres at the end of the race trying to hold off Hamilton. Hamilton on his newer tyres was able to easily cut down Verstappen's lead and pull within a second of him in the last two laps of the race. There's a big difference between catching someone on track and passing them, and there just weren't enough laps left in the race for Hamilton in the faster car to pull off the move for the win.

The ending of the race was intense and dramatic. It had the feeling of every great sporting event where anything could happen at the end and you're on the edge of your seat until the final moment. Verstappen and Hamilton gave it everything on track in a clean, hard-fought battle. The United States Grand Prix absolutely delivered.

Verstappen with the win extends his lead over Hamilton to twelve points with five races left in the season. While that's a fairly large lead to make up, especially if both guys continue to finish P1 and P2, all it takes is one mistake in one race for this to easily swing back in Hamilton's favor. This incredible season is far from over.

In the Constructors Championship battle, Red Bull is starting to close the gap to Mercedes with Verstappen winning the race and Sergio Perez finishing in third place. Absolute hero ball from Perez today who was suffering from diarrhea before and potentially during the race. As someone who bet on Perez to win the race, I feel like I should have been notified that he was having diarrhea. Would have never placed the bet on him if I knew he was going to potentially shit himself in the car. Hand up, that one was on me for not doing better research into Perez's bowel movements.

Verstappen may have won on the track, but easily the star of the entire weekend was Ricciardo. The Australian put on an absolute clinic off the track stealing the spotlight at every moment. What a weekend for the Aussie, there's a reason he's easily one of the most liked guys on the grid. Pure joy in human form.

There was only one man who could steal the spotlight from Ricciardo this weekend and it was the one and only Martin Brundle. Brundle is the color commentator for the F1 broadcast and before the start of the race, he does a walk of the starting grid as all of the teams are getting set up. It's a chaotic atmosphere because all of the drivers, teams, and celebrities are all frantically running around the track. Brundle capitalizes on this chaos and just grabs anybody and everybody he can to get a few thoughts from them for the broadcast. That's when he ran into Megan Thee Stallion.

Clearly, Megan had no idea who Brundle was and Brundle had really no idea who Megan was either. Brundle repeating that she's a freestyle rapper several times and then asking her if she had a freestyle rap about the race had me in tears. Has to be one of the worst questions you can ask a rapper like asking a comedian when you meet them to tell you a joke.

She clearly had no idea what was going on and wanted no part in the interview so her team stepped in telling Brundle "you can't do that" which is where we get the all-time mic drop from Brundle "I can do that because I just did" then gave the camera a shoulder shrug and went about his business. What an incredible moment from an already incredible weekend.

The next race this season is in Mexico City on November 7th, which is always a super fun race and atmosphere. There are only fives races left to decide this historic championship battle, I can't wait to see the cars back out on track.

Huge shout out to these stoolies who got the Barstool F1 merch on the broadcast! At the beginning of this season, I would have never believed that we would see Barstool merch on an F1 broadcast. Thanks to everyone who was sending in photos and videos from the track this weekend. It looked like an incredible time at the track this weekend. Can't wait to see everyone there next year.

What were your favorite moments from the race today? Let's talk about it

And finally… LIGHTS OUT AND AWAY WE GO for the Mexican Grand Prix Sunday, November 7th.