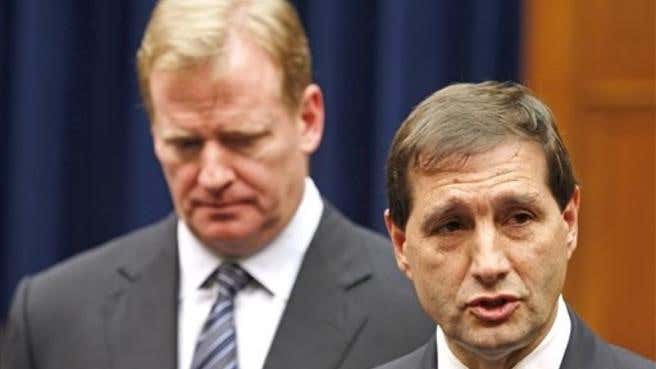 If you believe in any sort of justice in the world, you like to think that anyone who gets involved in a conspiracy designed to tear someone down will, eventually, get caught in the web of lies he or she helped spin. And when the capo of your crime family happens to be Roger Goodell, that web is usually so vast as to be unavoidable.

Enter attorney for the NFL Jeff Pash. You might not know the name. And if you don't, you are forgiven. He's one of the shadowy operatives who works under Ginger Satan, helping to carry out his evil schemes from the legal side of things. Consider him to be Goodell's Tom Hagen. His peacetime consigliere. And not being familiar with him merely means you were not as invested in Deflategate as I was.

To review: Pash was representing the NFL back in 2015 as well. And when all the demonstrably false information was being leaked out by the league, false psi data, reports that D'Qwell Jackson took the ball he intercepted to the Colts sideline because he thought it felt squishy (which Jackson denied at the time), that the Patriots also tried to steal a kicking ball (which was stolen by an NFL employee), the Patriots attorney Daniel Goldberg repeatedly emailed Pash begging, imploring his office to set the record straight. Reminding him that he works for the league, meaning all 32 teams equally. And he was told that all the facts would come out in the Wells Report. And when the Wells Report was delivered, several months and millions of dollars later, Pash was listed as one of the "independent" investigators. In fact, he'd helped edit the fucking thing.

Never mind that the Patriots are 1/32nd his client. And it got worse. When Tom Brady's team tried to depose him, they couldn't. Why? Because he hid behind "attorney/client privilege." So he was both independent and not independent at the same time. His hypocritical and unethical involvement in that fiasco was one of the major reasons Judge Richard Berman cited when he ruled in Brady's favor.

And now, because justice, at least an imperfect form of it, does exist, Pash is now stepping in the dogshit that is the Washington Football Team email leaks that have already claimed the professional life of one Jon Gruden.

NY Post - The NFL general counsel took part in a long-running, chummy email relationship with the former Washington Football Team president that included jokes about racial diversity and arranging givebacks from the executive.

Jeff Pash, also a top confidant of commissioner Roger Goodell, corresponded with Washington’s Bruce Allen from 2009-18 — also sharing complaints about player-safety measures and other league initiatives, along with jokes about Native Americans, according to a New York Times report.

Allen, who was fired by the team in 2019, thanked Pash in the emails for helping with a league fine and being compassionate toward the troubled organization. He arranged tickets and other perks for his pen pal in return for their relationship, according to the Times. …

Pash reached out to Allen after Washington was fined $15,000 for an improper injury report and the penalty was rescinded. Allen thought more trouble could be coming with regard to potential free-agent tampering, but Pash told him Goodell knows “that it is not you.” When the team was rocked by allegations of sexual harassment involving Washington’s cheerleader, Pash again reached out to Allen to say he knows “that you are on it” and would not “condone” something like that. …

The Washington cheerleaders were also part of the emails, which included inappropriate photos of the group’s members that were distributed by coaches.

That would be these Washington cheerleaders:

And here are some of the quotes from Pash:

As Pro Football Talk put it:

At a minimum, his emails show a too-cozy relationship with Allen, the kind of relationship that could undermine the competitive integrity of the league. …

[The emails have] become weaponized, and the weapon has been used twice in less than a week.

Someone wanted Gruden out. They got their wish. Someone wanted to at least discredit and at most destroy Pash. The former has happened; the latter still could.

It would take a heart of stone not to laugh.

Who is leaking this stuff remains to be seen. Why, in 650,000 emails so far only Gruden has been taken down and now this conniving weasel is in the crosshairs, no one can say. All we can be sure of is that, Atty. Pash is expecting cover from the capo whose orders he was acting on when he pushed the button on Brady and the Patriots all those years ago, he's in for a rude awakening. In Goodell's world, there is no honor among thieves. And sooner rather than later, the Deflategate Curse will claim him as its next victim. Couldn't happen to a worse lawyer.